Hayden Christensen Is in Heaven: Young Darth Vader’s Long, Strange Journey Back to Your Multiplex 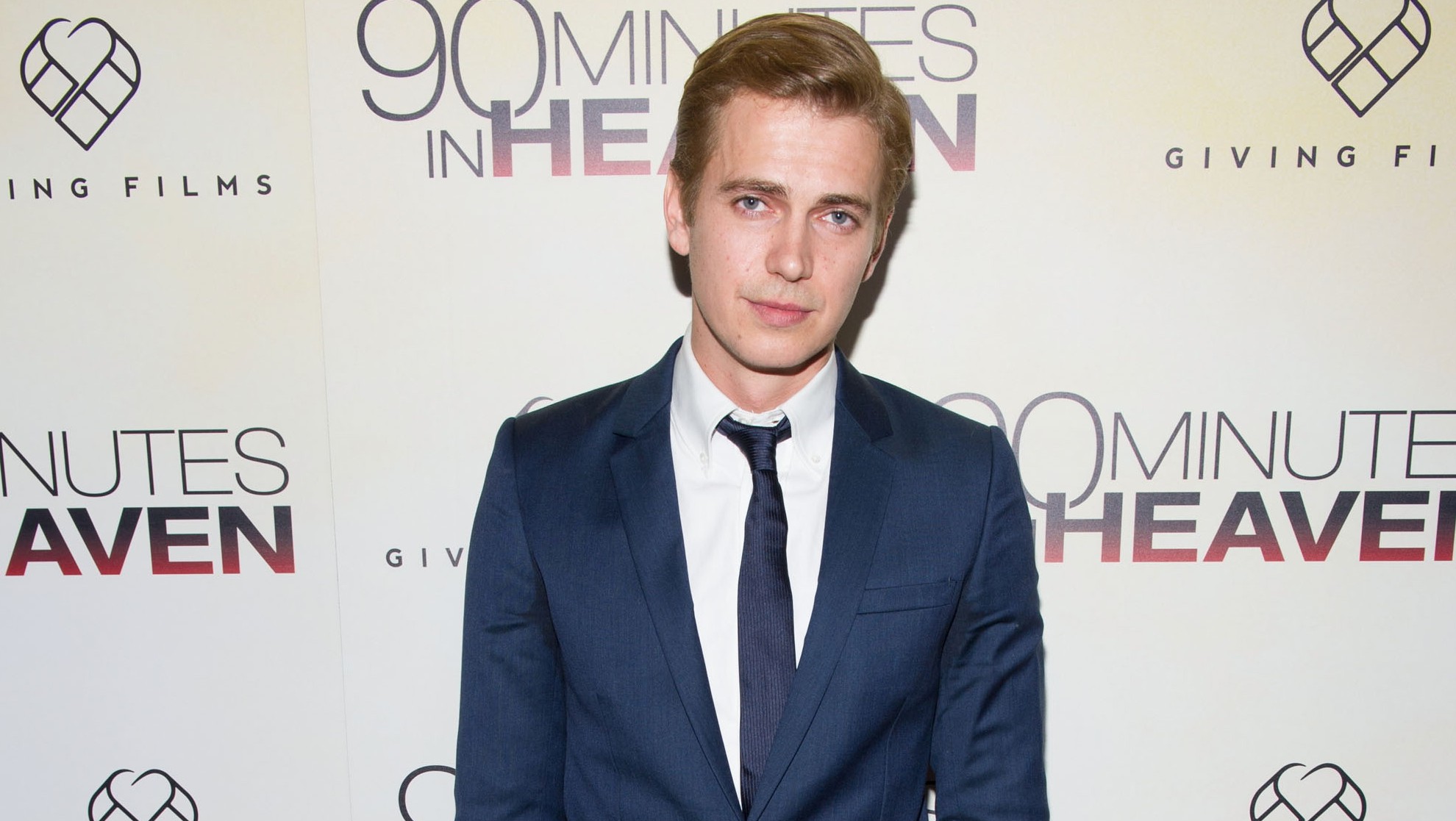 As you may have noticed, Star Wars mania is already damn near bubbling over. The constant trail of teasers and featurettes and general ephemera is being gobbled up by fans with all the maniacal chomping glee of the sarlacc; the toys are getting rapturous write-ups. I wanted to be cynical about it all, I really did. And then I saw the Chewy voice-replicator mask, and it was all I could do not to join along and sprint into the streets and screech: Three months from now we’re actually going to be seeing The Force Awakens! It’s like we’ve collectively agreed to completely ignore the despair and betrayal we felt the last time this happened.

But you know who’s not letting all of that angst go anytime soon? My guy Hayden Christensen — the boy who would be Vader. More than a decade since he washed up on the volcanic shores of Mustafar, Christensen is still — against all odds — a working actor. But any hopes of superstardom he once quite fairly harbored have been duly extinguished. This week, Christensen stars in 90 Minutes in Heaven, the latest adaptation of a real-life account of a near-death experience and temporary celestial visitation. By the end of the year, the Star Wars expanded universe will once again Rule Everything Around Us. Meanwhile, that boy Hayden is getting his Colton Burpo on.

There are those — still smarting at the prequels’ besmirching of their beloved pop culture — who’d find this a befitting place to find the guy in 2015. Let him eat faith-based drama! I can’t really begrudge them: Watching Christensen quiver his jaw in proto-Durst fashion — what the hell did I do to the Tusken Raiders? Killed them all, of course! — is an experience I’d rather soon forget.

But we can’t ever point the finger at Christensen without remembering Harrison Ford’s well-traveled quote about spitting out George Lucas’s dialogue: “George, you can type this shit, but you sure can’t say it.” And here’s the thing: There is a small but significant body of work that suggests Christensen can actually act.

He started as a kid actor back home in Canada, on the German Canadian television coproduction Macht der Leidenschaft/Family Passions.1 Obviously. In 2001, he costarred in Life As a House, which was not, unfortunately, a techno-thriller about an evilly sentient domicile, but a respectable family drama. Nonetheless, it landed him a Golden Globe nomination. In 2002, in London, he played Dennis in This Is Our Youth alongside Jake Gyllenhaal and Anna Paquin. (Stop to think about this for a moment. It’s remarkable.) And in 2003, snuck in between Attack of the Clones and Revenge of the Sith, he did Shattered Glass.

Playing Stephen Glass, an ascendant young-buck reporter at The New Republic taken down by his unfortunate tendency to fabulize in his stories, Christensen offered a wonderfully creepy naïveté. It’s not a great movie, necessarily, but it’s well worth your time. (For starters: Chloë Sevigny and Rosario Dawson and Peter Sarsgaard?!! What is good, Shattered Glass.) And Christensen pops out. Maybe it was the right combination of skill set and material; maybe curdled doe-eyed charm was what the nice young Canadian fellow was always meant to be doing. But it all adds up to a remarkable performance.

For a little while after Revenge of the Sith, things actually seemed to be continuing apace for Christensen. Relative to the first two installments, at least, Revenge of the Sith was almost, nearly embraced by the hard-core fans. And of course, just like all the others, it printed money. At the MTV Movie Awards, he received the Best Villain award (from the cast of You, Me and Dupree!) and for one small moment got to freely enjoy his moment in the zeitgeist.

But by 2008 and the teleportation number Jumper, Christensen was already giving bereft interviews. This is from Adam Sternbergh’s Details profile from that year:

Of course Christensen is grateful to Star Wars. If he could go back and do it all over, he wouldn’t change a thing. Just don’t ask him to do it all again. “It wasn’t necessarily anything you could feel good about creatively, as far as ‘This is why I became an actor,’” he says of his work in Star Wars. He puffs on a cigarette. “It’s not why you become an actor, to do stuff like that.”

And then again, at the end:

[In his home], he has a series of large metal letters that spell out a motto: ILLEGITIMI NON CARBORUNDUM. “It was a saying among soldiers in World War II,” he explains. “It means ‘Don’t let the bastards get you down.’”

Jumper actually made some money: over $200 million worldwide. There was, briefly, even talk of a sequel. But the years since, professionally at least (I mean, he did have a baby with Summer Roberts), have been strange and disjointed for Christensen.

Here is an odd detour: In 2010, Hayden and his brother sued USA Network, claiming they came up with the concept for Royal Pains.2 That same year, he popped up in Takers. Which means he might know a thing or two about a certain someone getting peed on at a screening. Give him a call, Meek!

In 2013, he made a deal with a Russian-funded company called Glacier Films to churn out micro-budget movies, apparently ones with an eye toward easily translatable action set pieces, and therefore financial potential for an international audience. Last year, marking his first onscreen appearance since 2011, he did two: American Heist with Adrien Brody and Jordana Brewster, and an imperial-fantasy-crusader-bandit thing called Outcast with — who else — Nicolas Cage.

It’s logical — internationally, apparently, his rep leans more toward “famous person” than “haunted Hollywood scapegoat” — if more than a touch sad. In this interview with China’s CCTV-6 (conducted by Josie Packard!!!), Christensen does his best to warmly reminisce over landing Vader. He talks of getting that phone call, and of his roommate at the time throwing on the Star Wars score, and of the two of them flipping out while having fake lightsaber fights. And yet, for an American audience, it’s hard not to watch this thing and read the subtext in his slight grimaces and flinches as And then, those movies kind of ruined my life.

So, yes. Here we are. It’s 2015, Star Wars is back, and Hayden Christensen is eating Kirk Cameron’s sad birthday party scraps (proverbially).

“Hayden Christensen is making a return to the studio world,” crowed THR just a few months back. “The actor, who famously portrayed Anakin Skywalker in the Star Wars prequels, will star in Marco Polo, the co-production between Paramount and China Film Group. Also involved are Chinese firms Yuehua Entertainment and Huahua Film & Media Culture, as well Phoenix Entertainment, who all are co-producing the project. Rob Cohen” — he of the first Fast and the Furious fame — “is directing the feature, which is being positioned as a fantasy-action movie.”

OK, well, no: Considering the subject matter (which has just been run through in Netflix’s maligned series of the same name) and the funding, this is clearly a Dragon Blade–esque play for the sizable Chinese audience. And what that means is Christensen will most likely spend the rest of his career in further marginalization as a North American playing for an international audience who happened to find the prequels actually quite dope, thank you very much.

But if I may go ahead and nonsensically appropriate a bit of relevant subject matter: Never tell Hayden Christensen the odds. Once, the young man dreamed of glory. May he be so bold to do so again.

'Grantland Pop Culture Podcast': Paul Scheer on the Final Season of 'The League' and More