Hater’s Guide: The Case Against The Descendants 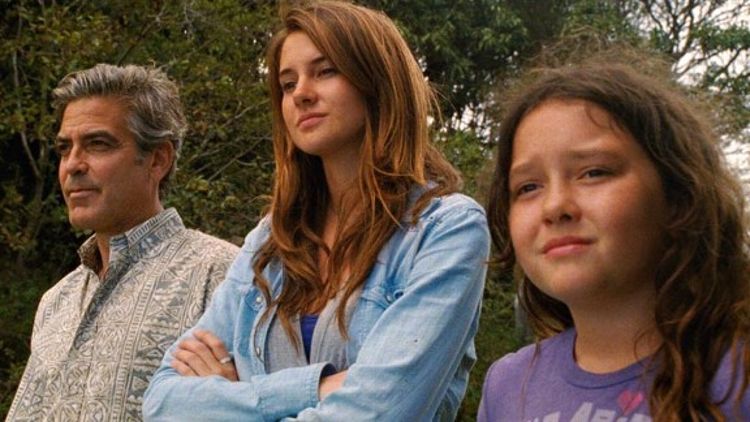 Oh, how lonely it is to be in the minority of viewers who hate an acclaimed movie. It’s like watching your friends throw their hands up on Space Mountain and go “Wheeee!” when you’re just claustrophobic and nauseated in outer space, or deciding to leave the slumber party early just as someone pulls out a bottle of cooking wine to get crunk. You have failed at enjoying something that will win Oscars. You failed to be moved. Your heart is faulty. Your ears are the only set of ears that don’t want to hear more ukulele music. When you sigh at The Descendants, expecting your sigh to settle among other disaffected exhalations of stale air, somebody claps a hand over your mouth and insists that “this mature, well-acted dramatic comedy is deeply satisfying, maybe even cathartic.” Wheee! Look at those glittering planets zipping by! Who’s that curmudgeon throwing up on her own shoes?!

George Clooney can’t help but be the kind of actor whose eyebrows and line delivery indicate that he knows, for instance, how to describe a jellyfish or when to punch somebody in the nose. He’s the least ineffectual-seeming actor I can think of. Matt King, Clooney’s character in The Descendants, doesn’t punch anyone in the nose, though he has plenty of good opportunities to do so; he also flops around barefoot and stares at black-and-white portraits of his ancestors on Hawaiian walls as his diluted feelings float away on breezes of pikake. He hasn’t been there for his family of four until his wife becomes comatose in a Jet Ski accident, but what he was doing instead (busy with real estate law?), an interesting question, is never really addressed. Maybe nobody cares what King was up to in Hawaii during his emotional absence, but I do, because he’s George Clooney and inherently more interesting than Matt King. I assume he was building a mid-century sandcastle with a working elevator. I would have liked to see that sandcastle instead of watching him stare at a wall of photos while a song that goes “yoodoo loodoo yoodoo looheehee” liquefies my bones and gives me the jelly giggles. He flaps down the street in slip-on shoes to yoodoolooheehee on his way to confront, but gently, the friends of his wife who knew her secret. (Why spoil it for you? You’ll love this movie. Everybody does. Everybody but me.) Who is the likable life raft in this aquamarine ocean of a movie? King’s daughter Alexandra, who keeps calling her dad a pussy (sometimes justifiably)? King’s other daughter, Scottie, a fun and spazzy 10-year-old who wears her sister’s underpants as a bathing suit?

They’re great, sure. So is Judy Greer. So is King’s father-in-law (Robert Forster), who actually does punch someone (but in the eye). But somehow it feels as though there is so little of them, it’s like holding on to a single floatie when what you need is a full-size inflatable dinghy. And what about the rest of the community of Hawaiians, with the exception of a family visited by King and Scottie in an early scene? The experience of living away from the mainland hinges on a connection between the past and present, a connection that is delivered via voice-over and uke-over instead of composed scenes delivered on a plate — Spam and indigenous fish, side by side.

Of course, to not enjoy a movie like this is to feel as though you must have missed something. If you didn’t like The Kids Are All Right, if you took issue with the candlelit bathtub foot-massage scene as being an unrealistic Hallmark card of mature romance or wondered how exactly Annette Bening and Julianne Moore’s characters ever had anything to talk about in the first place, it must be because you’ve never shuttled yourself to the kind of planet on which this is the reality. Other humans — 93 percent of humans, according to Rotten Tomatoes — have, and they threw their hands up and went “Wheee!” on the rocket ship ride there. You are sadly landlocked. You may start to have an emotional reaction to the sight of King’s wife’s tracheal hole and the beep of her life-support machines, but then (what?!) the patient’s father brings up King’s impending sale of thousands of acres of Kauia and the money King stands to make, and you’re reminded that this planet is inhabited by creatures that are completely alien to you. Nothing they do or say makes sense, the music clashes with the action, and as Clooney dumps ashes into the ocean and says “Well, I guess that’s about it,” the only thing that hits you is the fact that this is the only scene during which you are not being force-fed more ukulele. And you know what? I thought I liked the ukulele. I guess I was wrong about everything.

Previously:
The People Who Hate Glee Creator Ryan Murphy
American Horror Story: The Finale
The Survivor Finale: In Praise of Sophie
The American Cooking Show Boom: Why We Watch

Oscarmetrics: Bridesmaids and the Known Unknowns