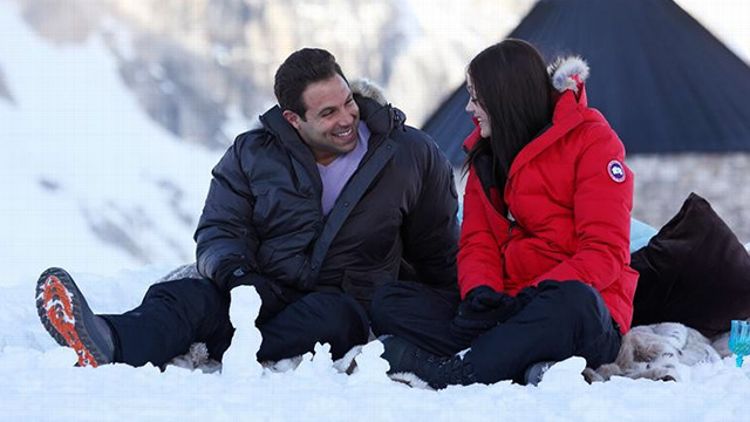 Desiree Hartsock’s quest for love has gone international. This week, Des and her guys found themselves wearing matching hoodies in Munich, Germany. No, they were not there as part of a tribute to the underrated Steven Spielberg movie of the same name. Desiree needed to further forge the bonds of love on the German mountaintops with a polka soundtrack. Most importantly, this is Des’s first trip to Europe! Everything that transpired could be categorized as a first. That’s a lot of pressure for our guys.

Why he’ll win: Because he has now suffered through enjoyed two private concerts with Des. Two weeks ago, Chris won a rose on a group date that entitled him to a private concert. This week, his one-on-one concluded with the piano stylings of Matt White. Chris is on a hot streak! The concert was presented as a special bonus at the very end of their otherwise normal-ish date. At least we know he can ably survive highly unrealistic and extremely awkward experiences that, should he win, will never occur in the real world.

Misgivings: He’s too confident. Chris says he’s falling in love with Des and believes it’s mutual. She hasn’t told him she loves him, but she says it with her kisses. Apparently. Don’t get too comfortable, Chris.

Why he’ll win: Because he repeatedly finds a way to win on the group dates. Des, Brooks, and seven other guys went up to the German Alps. They did some elaborate sledding and lounged in a very fancy igloo. There was no official competition (except for the ongoing pursuit of Des’s heart, of course), yet Brooks still found a way to separate himself. Not only did he win the group date rose, but his competitive spirit compelled him to spy on Des while she was with James. Some may call that voyeuristic or creepy. I think it’s just dedication.

Misgivings: Des looked bored while he emoted. Before they got to the requisite kissing, Brooks told Des how he felt about her and their relationship. She forced a few faces to make it seem like she was engaged until she kissed him to get him to stop talking.

Why he might make the leap: Because he’s still here. It’s hard to believe that the shirtless guy from the first night made it to an international stop with Des. But Germany has special meaning to Zak, so perhaps it was meant to be. It’s not that he’s a schnitzel or sausage or beer devotee. Ten years ago, Zak thought he “was going to be alone his whole life” because he believed he was going to be a priest. Presumably inspired by The Sound of Music, he made a pilgrimage to the German Alps to discover if this was his true destiny. Spoiler alert: It was not. I’m happy for Catholicism that he didn’t pursue this path (being alone’s not really the point, Zak), and, more importantly, I’m happy for Des. Chris Harrison asked her who the best kisser was, and she chose the topless wonder. Zak is officially on the rise.

Why he might make the leap: Because he has supplanted Ben as the main villain. James did not get that much face time with Des this week, but he did get a lot of camera time. Drew and Kasey were cursed with the knowledge that James is not here for the right reasons: He just wants to make the top four so he has a chance to be the next Bachelor. While we never saw James refute this or defend himself, we did get many lingering shots of his face, talking to Des or to the other guys. If his Bachelor aspirations are already discussion fodder, there is no way it will happen. As soon as Ben was sent home (more on that below), James was safe. We couldn’t lose two villains in one week.

Saving Grace: Someone has to speak exclusively in clichés and metaphors. Michael G. is a lawyer — a federal prosecutor, to be precise. Even if you didn’t spend an absurd amount of time poring over the various bios on ABC.com, you’d still suspect he has some tenuous connection to the law because Michael G. speaks exclusively in the type of legal jargon that Elle Woods uses in Legally Blonde. Michael G. was forced to go on a two-on-one date with his nemesis, Ben, and he spent the entire date trying to get Ben to admit to some supposed crime or fraud or something. It was incredibly awkward to watch, so it must have been much worse for the actual participants. (They did get to go in a hot tug, though, which is not as dirty as it sounds. It’s a wood-fired hot-tub boat, and it looks awesome.) Michael G. probably survived because he was more tolerable for one more week. 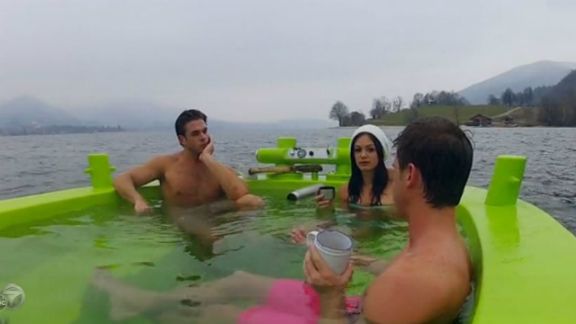 Saving Grace: He is dedicated to justice. He may not be a lawyer like Michael, but Kasey does his part to keep things litigious. Kasey is on his own crusade. He is leading the anti-James movement, which, to this point, is failing. Des refuses the cocktail party, thereby denying Kasey the chance to expose James. If he was really passionate about the cause, he could have asked for some time with Des to talk it over. It’s not unprecedented — Des did it with Sean last season! The only thing Kasey seems truly committed to is fashion. While guys like James and Mikey T. went without ties, Kasey wore a three-piece suit (dark suit, white vest), tie with tie bar, and sneakers. It was a strong look, but he’ll be gone soon.

Saving Grace: Kasey needs a partner. Drew has even less of a relationship with Des than Kasey. Drew has not even had a one-on-one date yet. He is only still here because he’s articulate. He can’t land any zingers and he’s not funny, but he is a useful narrator. He repeated James’s treacherous commentary with great detail. The way he told it, James is using the show so that when he returns to Chicago, he’ll be able to run the town even more than he already does. It’s a theatrical tale perfectly suited for the middle of the season and Drew is the storyteller we need.

Saving Grace: English is not his first language. We all know that the Bachelor franchise has a diversity problem, and as long as Venezuelan Juan Pablo hangs on, the cast is not solely comprised of identical white guys. Juan Pablo confused the words “yodeler” and “juggler” this week. Isn’t that cute?

BRYDEN
Bryden eliminated himself. The doubts he had in Atlantic City persisted, so he took to the streets of Germany to tell Des that he needed to leave. The producers seemingly refused to help Bryden track down Des, because he asked random people if they had seen her and the cameras following her. It was ingenious: turning the camera on itself. Eventually he finds Des as she’s dancing in the street with Chris. Bryden, looking like a Die Hard bad guy, watches from the side for a few moments before interrupting the date. The timing was as inexplicable as Bryden himself. Nonetheless, I will miss Bryden’s ever-changing hair.

BEN
Ben was sent home on the two-on-one date. His Bachelorette crimes never came to light, but Ben still seems like a sociopath who (unfounded theory alert!) might have an anger management problem. Instead of fighting with Michael G., he left the room to cool down. It seemed like a coached and calculated move that may have worked against him in the end. Ben, fight back!

MIKEY T.
It was over for Mikey Teeeeeee! When Des asked him if he’d ever leave Chicago and he replied with a non-answer. Maybe Des hates the Midwest.