Handicapping The Bachelorette, Week 3: Restraining Order Revelations and a Really Pissed-Off Girlfriend From Back Home 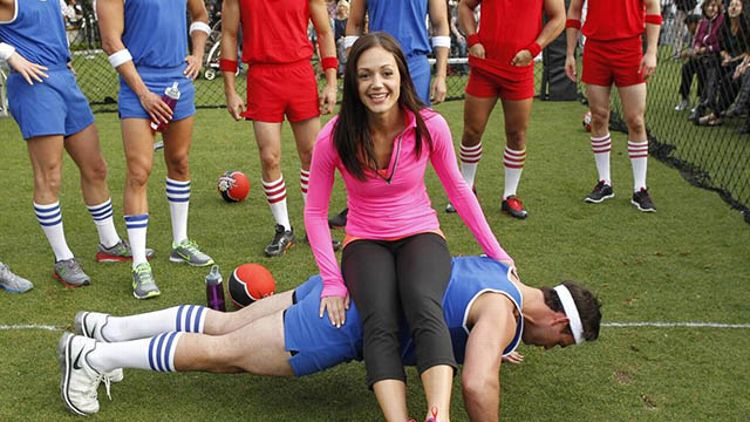 Things are getting good on The Bachelorette. Or maybe it’s just easier to keep track of these guys now. Whatever. In one week, we went from three square-jawed, dark-haired, indistinguishable dudes to just one. This is what progress looks like.

Why he’ll win: Because he stole the power from Des. Chris hadn’t had any defining moments before he whisked Desiree up to a very special spot (the hotel’s helicopter landing pad) at the end of the first group date. Not only did he turn the dodgeball date into a personal victory by securing the rose, but he used Desiree’s own rhetoric against her. He told Desiree he was “glad to see [her] in [her] own skin” that day, which is essentially what Des said as the dodgeball theatrics began. Chris benefited from good timing since his emotional power grab came amid a week stuffed with sob stories and drama. He was rewarded by a private concert with Kate Earl and more alone time with Des. Wait. Is a private concert with Kate Earl a reward? Either way, extra points to Chris for wearing a fantastic jacket.

Misgivings: We still don’t know much about Chris. He’s not a single dad. He doesn’t suffer from abandonment issues. Who is this guy?

Why he’ll win: Because he debuted a new hairstyle on the second group date. Someone is looking out for him. It’s incredible how much difference a comb can make; he no longer looks like he stepped out of the “Quit Playing Games (With My Heart)” video, and it has transformed him.

Misgivings: Des is already lamenting his lack of aggression. If you’re on a reality dating show, you don’t want to be the “reserved” one who doesn’t know when to go in for the kiss. Future Bachelor(ette) contestants: This is the only move you must master.

Why he’ll win: Because he is willing to break an appendage and have his hospital visit shown on television. Brooks goes to the ER as as result of a broken finger during dodgeball, which paved the way for his heroic return later in the day and allowed Des to tell him that she missed him. Brooks didn’t get the rose, but he can’t get it every time.

Misgivings: Brooks goes to the ER as as result of a broken finger during dodgeball. A broken finger! Chefs regularly slice open their fingers on cooking shows. Kobe Bryant made foul shots with a torn Achilles. Pull it together, Brooks!

Why he might make the leap: Because he took a different approach to the sob story. Unlike the other guys who come with baggage and/or children, James used his sadness (an ailing father) as leverage. He didn’t try to appeal to her with pathos, but he asked if he should stay. He made Des decide for him if he was there for the right reasons, which is truly creative.

Why he might make the leap: Because Juan Pablo makes up for all that Bryden lacks in the move-making department. Juan Pablo wins the second group date, and thus, in a Survivor-style tie-in, gets to watch The Lone Ranger with Des. The movie date becomes a makeout session, which leads Des to describe him as “sensual.” Sensual! There is no higher accolade on The Bachelorette.

Why he might make the leap: Because he is our narrator, the supposed voice of reason. He doesn’t appear to have much of a connection with Des, nor does he do anything too embarrassing. Yet, Michael G. is the producers’ top choice for on-the-ground reporter. His voice is ringing in my ear. Additionally, he did his best to indicate his commitment to Des and the pursuit of love by wearing compression pants to the group date.

Why he might make the leap: Because he is a master of securing one-on-one time with Des, but it’s getting creepy. This is Ben’s first week out of the “Front-runners” category, but that’s what happens when you repeatedly take a girl out on secret dates. Ben’s downgrade also comes as a result of a forced interview from Des. He said he didn’t want to get placed in the “dad zone,” but Des mainly described him as such. Ben, the tide has turned.

Saving grace: Des is talking herself into Zak W. In what seemed like a genuine moment during the second group date, Zak tells Des he likes her because she’s a “team player.” That may not be the compliment you’re seeking from your future husband, but she appreciated it. At first Des responds with her default “That’s nice.” She has said “that’s nice” an immeasurable number of times over just three episodes — most notably to Ben in Episode 1 when he revealed how amicable his relationship is with his baby mama. But just a second after her response to Zak, she followed up with “I like that!” That’s one we haven’t heard much from her, which is a good sign for our favorite topless contestant.

Saving grace: There’s no way Mikey T. will win, but he serves a purpose like a prop for production. Last week he was the comic relief on the set of the Soulja Boy video. This week he was the goon in dodgeball, though ultimately the two professional baseball players outlasted everyone else.

Saving grace: Brad is now the other single dad, but without a baby mama in the picture. In fact, it’s quite the opposite. Brad used his time with Des during the first group date to reveal that he has a son, and that he has a sordid past with the mother. Brad explained in vivid detail how the mother was an alcoholic and how she got him arrested for domestic violence, resulting in a restraining order, both of which were subsequently dismissed. Hey, Brad: Know your audience and quit while you’re ahead. It was enough to tell her about the son. Save the legal drama for once you’re engaged.

Saving grace: You can’t eliminate a totally inoffensive dude when guys like Brandon are still around. Kasey went on his one-one-one immediately following the elimination of Brian due to his current girlfriend showing up, and it might have been the worst date in franchise history. They danced on the side of a building, followed by another rooftop jaunt. Whose idea was it to jump in the pool because the weather was so bad? Swimming on a cold night is not remotely appealing. If there were ever a time for hashtag humor, it would have been on this disastrous date, but Kasey has apparently dropped his trademark.

Why he’ll be going soon: Zack K. won the dodgeball tournament, yet he got no roses nor any further screen time. Good-bye to you.

Why he’ll be going soon: I keep waiting for Drew to break out, but other than wearing his sweatband with flair, Drew does little of note, save for uttering a steady stream of clichés.

Why he’s gone: Because he has a girlfriend who didn’t know he was going on the show. He told his current girlfriend that he was going to a work convention and needed time for himself. That is truly an incredible, audacious lie, and it’s because of guys like Brian that I wish Bachelor Pad were still around. Brian, I hope to see you on another reality show soon.

Why he’s gone: Because he cried too much. Brandon was particularly enraged by Brian because Brian’s girlfriend is a single mom, and as the son of a single mom, Brandon was wounded by all the men who didn’t stick around. While this is very sad, it doesn’t make you sensual like Juan Pablo or lovably tragic like James.

Why he’s gone: Because his only defining moment was applying copious amounts of sunscreen last week.