Hair Gel and Narrative Completion: Why Tonight Should Be the Last Jersey Shore Ever 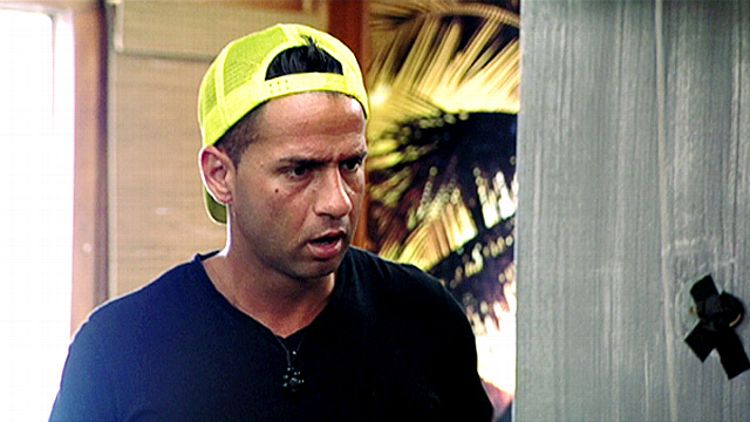 I will watch Jersey Shore until one of us dies.

Even if it goes on forever and is never any damn good again, it will be the Zippo flame with which I burn my palm, G. Gordon Liddy-style, to prove my devotion to the medium of reality television. I’m even going to watch the reunion show that airs on MTV tonight, even though, if past reunions are anything to go by, this one will yo-yo tonally between mildly contentious and gun-to-the-head stilted and suck away an hour of my life without teaching me anything. I don’t care. I’ll watch it, and I’ll be back for Season 6, which begins filming in Seaside this summer, despite abundant evidence that there’s not enough Ron-Ron Juice left in the tank to get this vehicle around the block one more time. I have made a commitment. I want to see what happens to these people, even if what happens to them is nothing. Which I guess means I just like looking at them on a screen, and that there is no objective difference between me and Pauly D’s stalker, except physical distance and the fact that I don’t carry a sparkly bag.

The show’s ratings slipped a little last season, but it remains the no. 1 show on the network, as well as the no. 1 cable show among viewers 12 to 34; the conversation about its future presumably won’t change until those facts do. And yet if last Thursday’s season finale had been a series finale, I would have been totally okay with that. Didn’t it feel like a finale? Everyone at some kind of peace, riding off into the tequila sunset? JWOWW’s finally happy with Roger, who will presumably never break her heart and steal her hard drive. Ronnie and Sammi, a veritable nail-bomb of dysfunction in seasons past, are finally happy with each other, and therefore so boring they barely register onscreen. Pauly D, a.k.a. The One With the Hair and the Good Attitude and the Marketable Skill, got his own show, The Pauly D Project, in which he’ll DJ at the Palms in Vegas while his bros from back home in Rhode Island tan in the reflected ultraviolet glow of his pseudocelebrity. And Vinny had a threesome with two lesbians. Closure!

By the time the episode aired, we also knew that Snooki was engaged to boyfriend Jionni LaValle, taping her own spinoff show with JWOWW and gestating in her toxic womb the SnookiChrist, whose birth will usher in the Tribulation leading to the End of Days, followed by the death of all things in a rain of fire and hair gel expecting the first of the many cute gorilla-babies she’d always talked about wanting to make with him. Sure, Deena remained a tragedy — but every cast needs a Ben Linus, waiting forever outside the church while everybody else goes to nondenominational heaven.

And when TMZ reported on Tuesday that the Situation had entered an inpatient rehab program, seeking help for a substance-abuse issue, that felt like an ending, too. It’s always thus with lovably dysfunctional TV families: somebody gets pregnant, somebody goes to the drying-out facility. His camp spun the usual he’s-just-tired stories, but eventually Sorrentino announced via blog that he had “voluntarily taken steps to get control of a prescription medication problem I had due to exhaustion.” Sorrentino has seemed increasingly paranoid/vengeful/sweaty on the show lately; the idea that he might have been starring in his own private Skrillex-scored off-off-Broadway production of Hurlyburly made a lot of things make sense. The camping trip episode, during which the Situation suddenly became the squirreliest squirrel in the woods and spent a few minutes channeling this classic Damon Wayans bit before zipping his tent shut. That fight with Ronnie in Italy that ended with the Situation deliberately head-butting a wall for no reason. The I-don’t-like-people-touching-my-stuff fit he threw when Pauly D and Vinny moved everybody’s belongings to the roof.

But everyone looked a little exhausted (in the non-euphemistic sense) this season. In what probably seemed in theory like an ingenious, drama-maximizing dick move, MTV flew everyone home from filming Season 4 — the joyless, contrived Italy season, the one they spent holed up in a windowless Florence apartment, as if staging some juicehead production of No Exit — then shuttled them directly from the airport to Seaside to begin taping Season 5, without so much as a minute to decompress or reconnect to a life outside the Panopticon. This did allow one key storyline — Mike telling everyone he’d hooked up with Snooki in L.A. prior to Italy, Snooki denying it, Mike threatening to tell Jionni — to play out a little longer than it might have, but in general it seems to have backfired. Water-balloon fights and “spontaneous” fishing trips notwithstanding, everyone seemed sarcastically detached (Pauly D) or withdrawn (JWOWW) or lonely (Deena) or on a self-medicating day-drunk bender epic even by JS standards (Snooki, ironically).

And Vinny actually made the decision to leave the show, after revealing that he suffers from clinical anxiety, a disorder that sleep deprivation and jet lag and alcohol can exacerbate. First, though, MTV — doing their level best to at least look like an organization still capable of taking a problem seriously — had him sit down for an expository come-to-Jesus smoothie with the Jersey Shore universe’s sole authority figure, long-suffering Shore Store proprietor Danny Merk. Merk gave him the kind of support only a well-meaning guy whose therapeutic qualifications begin and end with the ownership of a machine that stamps words on booty shorts can give, then ended the conversation by advising Vinny to “go have some drinks.” Hopefully he will not be acting as the Situation’s sponsor come Season 6.

The degree to which living under constant video surveillance in a house full of binge drinkers might have contributed to Vinny’s problems was not discussed, at least on camera; the one thing no reality show can acknowledge when dealing with recovery of any kind is that a reality show is probably not the best environment in which to recover. When Pauly D led an expedition to Vinny’s house in Staten Island to “rescue” him and bring him back to Seaside two episodes later, it was maybe the most bittersweet moment of the season. There’s no platonic dude-love story on television as touching as the Vinny/Pauly relationship, especially in the absence of Bored to Death—it’s proof that these guys aren’t emotional meatheads, even if they can’t quite access that level of feeling for the DTF broads they toss out at the end of the night. But you could tell that — as happy as Vinny (who’s always seemed like the cast member working with the strongest set of internal resources, not like a guy who makes big decisions lightly or attention-grubbingly) was to see everybody again — he’d been away just long enough to start imagining what a life post-Jersey Shore might be like.* For the moment, that’s something MTV still can’t bring itself to think about.

*The Situation: “The face that Vinny had—he was like a kid on Christmas. And it really showed Vinny that we cared. That was pretty much all he needed.” None of that is true.

Survivor: One World, Episode 6 - 'Thanks for the Souvenir' and the Burst Appendix