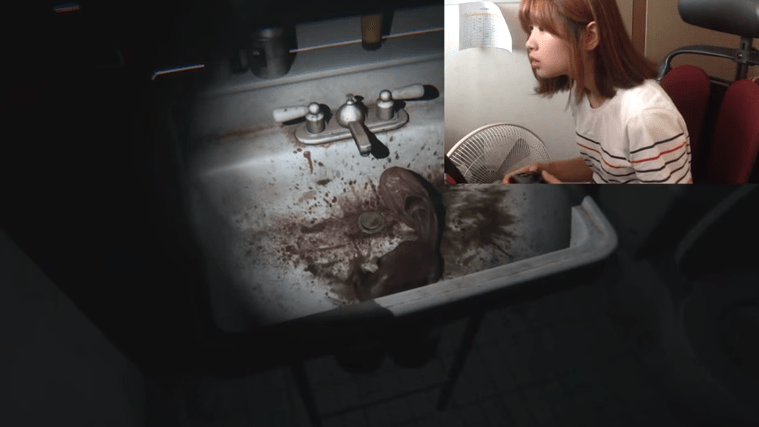 If you’re a fan of Guillermo del Toro, perhaps you’ve spent the summer thinking things like, Man, it’s too bad that in addition to the numerous things that suck about The Strain, it also is not in the least bit scary. I feel you. I also had high hopes for a good small-screen scare, based on the show’s billboard campaign involving vaguely penile-looking worms trying to burrow into someone’s eyeballs. Unfortunately, the show is all camp, bad hairpieces, and clunky dialogue, and no atmosphere. And if there’s anything you associate with del Toro, it is atmosphere. When the most disturbing thing about your vampire worm horror project is the ad campaign, there’s a problem. Has del Toro lost his frightening touch? Worry not, oh fan of horror! Don’t fret, oh devotee of the jump scare! Because I think Guillermo del Toro might have found the perfect medium for delivering his particular brand of darkness to your television, and it is video games.

Back in the middle of August, Sony announced a new game for its PlayStation 4 console at its yearly Gamescom conference. The game was semi-mysteriously titled “P.T.,” and a teaser — basically a small playable sliver of the game experience — was immediately made available for free download at the PlayStation Store. Later, after a few people had played through the teaser (actually finishing it is wickedly difficult), it was announced that “P.T.” is actually a trailer of sorts for the upcoming addition to the  Silent Hill series, which, like “P.T.,” is a collaboration between horror auteur del Toro and game design icon Hideo Kojima. If you have a PlayStation 4, and your PlayStation 4 is connected to the Internet, download “P.T.” now, pull down the shades, put on a pair of headphones, play the game, and do not read any further until you’re done.

So what’s “P.T.” like? Umm, it’s fucking scary. The weakness of any horror film is always going to be how — structurally, narratively — to get characters to do dumb stuff like go see what that sound was. In “P.T.” (and in any good horror video game title), that problem is solved, because you are in control of the character, and your inherent drive to finish the damn game means you will absolutely go see what that sound was.

The character you control in “P.T.” is nameless, the backstory is only fragmentary whiffs, here and there, of things you manage to hear over a crackly radio, and the level itself is rudimentary, just two hallways and two doors in an endless loop, rendered in deep, realistic detail. Your character wakes up in a darkened room, a bug crawling past your face. You stand up, move toward the door, open it, and move into a dimly lit hallway. Your character’s only ability is to look at things, to zoom in on details. So: You look at things. There are pictures on the wall, and a small alarm clock–style radio on a pedestal surrounded by empty wine bottles displays 23:59. You come to a hall table, where the passage takes a 90-degree turn. On the table are creepily out-of-date family photos, loose change, empty pill packages, a phone off the hook, and scraps of paper with very nearly readable writing as if in a dream.

The radio crackles to life behind you in the middle of a news segment:

“…when the 10-year-old came to investigate the commotion, the father shot him too. His 6-year-old daughter had the good sense to hide in the bathroom, but reports suggest he lured her out by telling her it was just a game. The girl was found shot once in the chest from point blank range. The mother, who was shot in the stomach, was pregnant at the time. Police arriving on-scene after neighbors called 911 found the father in his car listening to the radio. Several days before the murders, neighbors say they heard the father repeating a sequence of numbers in a loud voice. They said it was like he was chanting some strange spell.”

The second hallway branches off to the right. There’s a door, but you can’t open it. Farther down, there’s a foyer, lit from above by a lamp that seems to be swinging ever so slightly, and an entryway table, just as cluttered as the first. There’s another door at the end of the hall, and you go through, finding yourself back at the beginning of the first hallway. Now there’s a weird sound, like someone somewhere in the house is moving furniture. At this point, you will feel pinpricks of fear and find goose bumps rising on your arms. Against your own rational judgement, you move down the hall, cautiously now. The lights, are they dimmer? And the noise is moving around. You pass the hall table and turn right toward the foyer, glancing at the locked door, when someone or something bangs on it from the inside. You can see the door jumping out of its frame. At this point, if you are not scared, then you probably have the psychological makeup of someone who should join the Navy SEALs. You will find yourself running for the door at the end of the hall, but that only brings you right back to the beginning.

The game goes on and on like this. Minimal exposition and narrative direction mean that you have to explore to figure out what’s going on and what you’re supposed to do, which puts you right in the invisible jaws of whatever fiendish thing del Toro and Kojima have created. The suspense is incredible. There’s a mystery here, but you aren’t even sure what it is. I never finished the game, but that doesn’t matter, and it won’t matter to you if you don’t, because this is the future of horror. One tip: Look up when you get into the foyer.