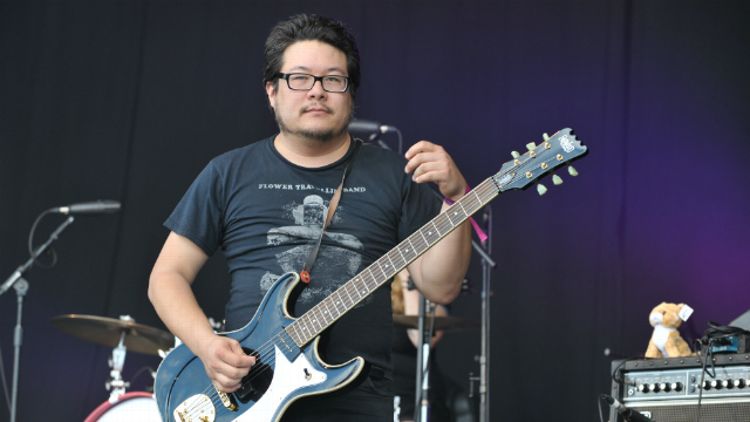 Since 2009, Grill ’Em All has been the dark lord of the Los Angeles gourmet food truck world. On January 19, they put their last truck on hiatus and opened a 50-seat restaurant nicknamed “Valhalla” in the Edwards Cinema Plaza in downtown Alhambra, the first non-mobile location to serve their heavy-metal hamburgers. Grill ’Em All is next to the Applebee’s, and two storefronts down from the Menchie’s frozen yogurtorium; to get a better sense of how it fits in with its new neighbors, know that on a recent Wednesday afternoon, the plaza-facing speakers at Applebee’s were playing “Best of You” by the Foo Fighters, while Menchie’s was piping out Tom Petty’s “Mary Jane’s Last Dance.” At Grill ’Em All, it was “Into the Coven” from Mercyful Fate’s theatrically demonic debut, Melissa.

Waiting inside was Bobb Bruno, one half of the band Best Coast and an aficionado of both metal and L.A. gutbuster cuisine. He was dressed in his customary all-black wardrobe, his facial hair reliably wispy. Bruno’s been around the Los Angeles music scene for almost two decades — playing in and recording bands, and previously working as an assistant to producer/performer/film composer Jon Brion. There was a period last decade where Bruno would perform solo shows on a Roland SPD-S sampling drum pad while wearing a white bunny costume with a cartoonishly oversized head that he got at a department store in Japan.

A friend of mine used to tell me about Bruno taking him to overeating palaces like Skooby’s, a hot-dog–serving hole-in-the wall on Hollywood Boulevard, or all-you-can-eat lunch buffets at Shakey’s, a local pizza chain popular for children’s parties (despite the absence of a singing animatronic rodent). “I almost went to Shakey’s the other day,” Bruno says. “My girlfriend’s from Chicago, and she’s never been there. I ended up getting falafel instead.”

Bruno and I looked up at the restaurant’s towering menu, spread across three blackboards near the register. A fan of Grill ’Em All since trying them at the Power of the Riff festival a few years ago, this was actually Bruno’s second time at Valhalla in less than a week. He came opening day and got the Jump in the Fryer, an obligatory pun on the Metallica song, which features fried chicken, bacon, cheddar cheese, drizzles of maple syrup, and hot sauce on a bun made from two waffles.

The night before our lunch, Bruno went to the album release party of Los Angeles black metal band Lightning Swords of Death and finished off his evening of drinking with a carnitas burrito. “I kind of overdid it,” he says. He rebounded in time for lunch to order the Dee Snider, a burger with peanut butter, strawberry jam, bacon, and Sriracha. Its name comes from the similarity in color between the condiments and the Twisted Sister singer’s garish stage makeup.

I ordered the Blue Cheer, a burger topped with blue cheese, cranberry gastrique, and a potato chip that gets its title from San Francisco’s proto-metal stoners. In a bit of possible overcompensation, I also got a side of Primate Fries, a tribute to In-N-Out’s famous secret menu item that dumps on cheddar cheese, Thousand Island dressing, and grilled onions.

We took a seat among the pilgrimaging metalheads and local office workers on their lunch breaks, whose billowing dress shirts came in a Crayola-worthy assortment of blues. Bruno had recently come back from some shows in Australia, and soon Best Coast would be leaving again for Japan. Then they were going to record a new EP in Los Angeles before playing a short tour of basketball arenas with Green Day.

In quiet but enthusiastic bursts, Bruno told the story of how he he was inspired to get into music because of Motley Crüe’s Shout at the Devil, and before long, he was listening to bands like Dio and Venom. “I never had money to buy records; I’d maybe get a couple a year,” Bruno says. “But I had friends who were constantly buying thrash records, so I’d just dub tapes off of them.” Toward the end of high school, he broadened his tastes to include free jazz and no wave. In the years that followed, he came to love the masters of melancholy pop and all manner of heavy weirdness. Still, he’s never stopped listening to metal. “I was talking to somebody about this yesterday,” he says. “If you don’t lose interest when you’re 18, you’re always going to be into it.” Now he’s the guy in a Burzum T-shirt playing guitar while bandmate Bethany Cosentino achingly sings, “Do you love me like you used to? Dooo you? Dooo you? Dooo you?”

Cosentino is gluten-free and doesn’t do red meat, but Bruno says that when they’re on the road, the touring musicians and the crew they travel with eat more like him than her. He briefly maintained a Twitter account that chronicled all the unhealthy stuff from around the world he ate: bacon-and-chicken pizza in the Copenhagen airport, fried chicken from Bojangles’ in North Carolina, a meat sampler in Rome.

Eventually, our burgers came, and we got down to business. Bruno ate his Dee Snider with measured bites and paced himself as the restaurant’s flat-screens switched from This Is Spinal Tap to Airheads. Negotiating any of Grill ’Em All’s burgers is a tricky task, but I think Bruno made it through using just one napkin. I devoured mine like a pig and didn’t eat another meal until the following morning.

The Americans Season 1, Episode 2: 'The Clock'