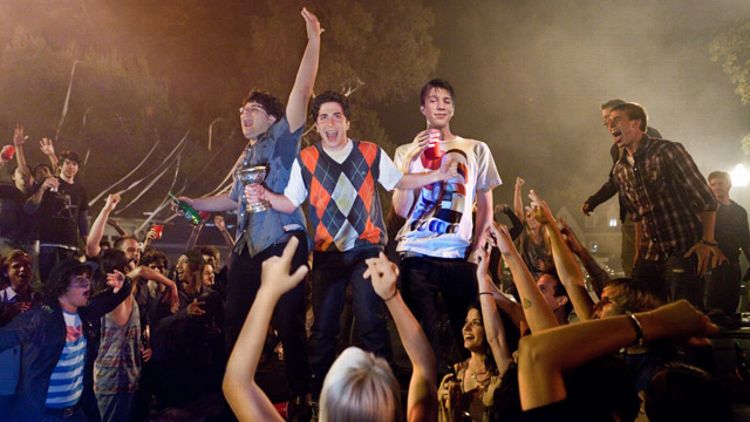 Hey, guess what? America still likes watching people party in movies. In its first weekend out, Project X — the Todd Phillips-produced epic party/found footage flick — made over $20 million, good for second place in the box office wars. It also got us thinking about the rich tradition of parties as depicted by movies. It turns out, after some heavy-duty analysis, that almost any cinematic depiction of revelry can be categorized into one of five primary movie-party groupings. These are generalizations, of course, which means not every movie party is a perfect fit for its chosen category. Some movie parties might easily fit into two or more categories; others may truly feel like sui generis creations. But as long as we don’t get too bogged down in those pesky details, our five-category taxonomy is unimpeachable. So: Consult Grantland’s Rough Guide to Partying in Movies, and never feel uninformed while living vicariously through fictional characters again! As a great man once said, “It’s a party it’s a party it’s a party it’s a parttty.”

LAME PARTIES THAT GET CRASHED BY FUN-LOVING REBELS

Definition: In its most exaggerated form, we’re talking about an uppity bunch of snooty rich people responsibly enjoying cocktails, respectfully eating out of bowls of mixed nuts, mild-manneredly engaging in hushed conversation, and generally not maximizing their fun potential in any way, shape, or form. Then, by some contrivance, the real party animals show up, uninvited, and transform the night into one of madness and destroyed property. The snooty vanguard tries to keep things together, but it’s all in vain: By the end of the night, the wild spirit in the hearts of the party crashers has transformed the staid, snooty crowd forever. It doesn’t HAVE to be snooty folks, though: As long as the original party throwers cannot handle the force and vision of the party crashers, this mode is in effect.

• The “Shout” party montage from Wedding Crashers. Surely, the classy weddings depicted would have been a nice, respectable fun time had they gone uninterrupted. They just end up being way more fun when Sanjay Collins, a.k.a. Seamus O’Toole, and Chuck Vindaloo, a.k.a. Bobby O’Shea, are in the building. Let’s all say it together: “I’m ready to get drunk!”
• The “I am a golden god” scene from Almost Famous. Rock star Russell Hammond shows up at a ho-hum suburban house party, and through the sheer force of his personality — and, you know, acid — turns it into a spectacular near-death experience that no one in Topeka will ever forget.
• The video for The Beastie Boys’ “(You Gotta) Fight For Your Right (To Party).” (Yes, technically, this is not a movie.) A couple of nerds, with an unattended home, throw a party with “soda and pie” and blithely hope that “no bad people show up.” Guess what? Bad people show up. The Beasties crew rolls deep and wreaks havoc: crushing beers, dropping Spanish Fly, making out with ladies, burning back issues of Popular Science, getting whipped cream all over Tabitha Soren. I mean, one dude walks through the door with his shirt already off.
• Arguable, but I’d throw Die Hard in here as well. If you recall, the reason John McClane is in the Nakatomi building is to attend the office Christmas party, a decidedly swanky affair. And then? And then actual rebels show up. Later it turns out their political inclinations are fabricated to cover up their looting.

Definition: Our heroes find themselves trapped within debauchery. In this scenario, the party is not an occasion for joy, but — and, as we’ll see below, this could be for any number of reasons — an occasion for panic. While others revel, the protagonists have to plot their exit without meeting their doom. This might often involve secretly acquiring something without detection, which could be the very reason the protagonists slipped into the party in the first place. Usually, this means the demise of the party, as well. Sometimes the people throwing the party are evil; other times, it’s just a few of the attendees that have it out for our protagonists.

Examples:
• Halfway through Superbad, Seth and Evan find themselves at vaguely hick adult party. The plan is to find booze and then take off to their normal high school party, at which point they’ll impress their ladies and — hopefully, just maybe — get some action. Then Seth gets a mysterious stain on his trousers and nobody (including Eastbound & Down co-creator Jody Hill) believes him that it’s just Merlot. A fight breaks out, the cops head over, and the pair eventually escape with gross gas tanks detergent bottles of beer and dimmed hopes of love.
• Edward Norton’s American History X neo-Nazi character undergoes a jailhouse conversion to sanity, but picks a bad time — his neo-Nazi homecoming party! — to reveal this to his ex-mentor, which he does via a flurry of punches. The scary racists are after him, but Norton pulls some ninja shit with a gun, and the escape is on.
• The Star Wars franchise is, surprisingly, a fount for this kind of thing: Han Solo icing Greedo to escape the Mos Eisley cantina, Luke Skywalker facing off with the rancor in Jabba the Hutt’s lair of sin, the whole crew wrecking shit over the the gaping mouth of the Sarlaac while Jabba and his pals party on their sky barge. R.I.P., Boba Fett.

PARTIES THAT SEEM REALLY FUN BUT ARE ACTUALLY FORESHADOWING DOOM

Definition: It’s always a good rule of thumb, as you’re watching any lavish, delightful, orgiastic feasts of pleasure and joy, to ask yourself: Is this just a veiled harbinger of doom? Once the parties get really, superbly awesome in movies, you have to assume that a crash is coming. The party being so awesome makes it all the more harsh when the hero does meet his downfall. So watch out for the debauchery that portends disaster; it is a cruel reality. And if you are really in need of some conscience-free partying, there are always rap videos (might I suggest Meek Mill’s “House Party”? It is a jam).

Examples:
• Sofia Coppolla’s Marie Antoinette has one hell of an all-night rager: gambling, boozing, wigs. Later, a little thing called the French Revolution gets in the way.
• The Matrix Reloaded. Just some happy weird techno-rave times before the machines start boring in on Zion.
• In Boogie Nights, a young man named Eddie Adams is having a relaxing time in a hot tub with some bros when he has a vision of an exploding name in bright-blue neon lights with purple outline: Dirk Diggler. And, for a while there, Dirk does have himself a hell of a time; at one point, he even does a sick jackknife dive during an epic one-shot pool party. But his run on the top of the porn game ends in ignominy and disaster and death, and then one hell of a male full-frontal reveal.

Definition: Kind of a niche category, but anytime a movie has a plot twist that revolves around the anonymity and mistaken-identity potential provided by a masked ball, it fits in snugly right here. Nobody really has masked balls anymore, so this kind of thing isn’t as prevalent as it once was. It’s also often dismissed as a gimmick, just a cheap contrivance. But there’s something to be said for the simplicity of mask-based plot acceleration.

Examples:
• Leo finding Claire Danes in Romeo + Juliet. If it wasn’t for his mask, how would Romeo have crashed the party at the Capulets’?
• Lindsay Lohan and Chris Pine in Just My Luck. They meet at a ball, kiss anonymously, and then her good luck is magically transferred to him. Eventually they learn each other’s true identities, but not before falling in love through a series of comical mishaps!
• Tom Cruise in Eyes Wide Shut, enjoying himself some creepy nutso Illuminati group sex. The search for the people behind the orgy becomes, in fact, a spur for a rediscovery of his inner sexuality, and his true love for his wife, and his true love for their sexual chemistry. Or, I don’t know, something like that? That movie was super confusing. It was definitely about sex, though.

Definition: Ah, here we go. The true heart of the party-movie genre. The basic concept is familiar, and pure, and good: a couple of kids, some hopes and dreams — maybe the hopes and dreams of finding love, or acceptance, or self-confidence — and one giant bash where those hopes and dreams just might come true.

Examples: Almost too many to name. Project X is a hyperaggressive but ultimately straightforward take on this very premise. (It’s also, I believe, an implicit nod to that awesome Australian kid who had a party so epic it made the national news.) The aforementioned Superbad ends up here as well, as does House Party. Dazed and Confused fits, more or less, even though the partying there is a softer, drawn-out affair — not so much epic as never-ending. Empire Records‘ finale, in which Coyote Shivers performs his classic “Sugar High” on a roof with Renee Zellweger on lead vocals, is a last-chance party with layers: Not only do the individual characters have to find their fates, but the store itself must be saved. Can’t Hardly Wait is probably the crowd favorite in the field: When plucky, drunk William Lichter pops up to belt out “Paradise City,” who among us is not fist-pumping in delight?