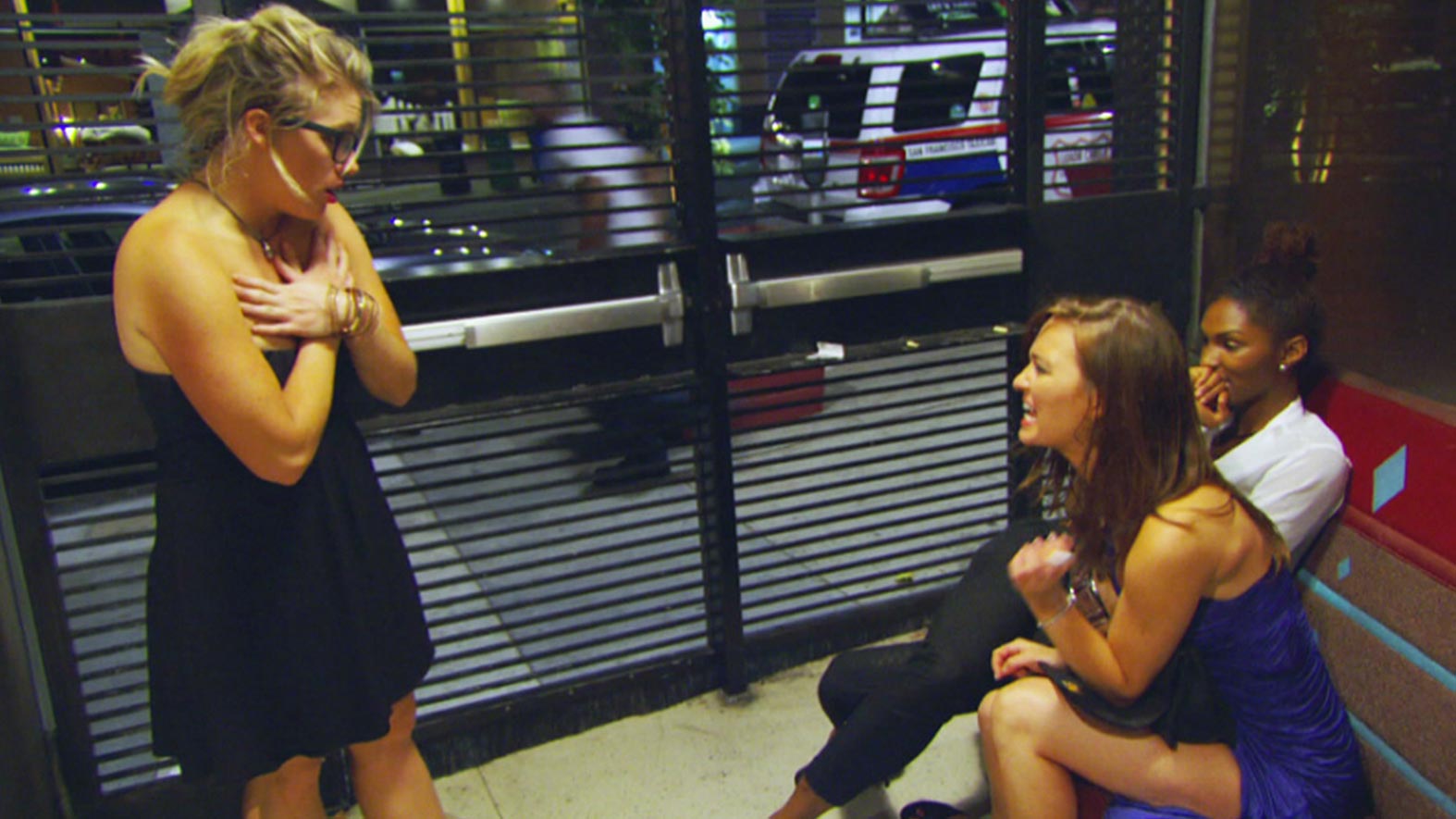 Why am I writing about only two reality shows each week when I watch 15? It’s time for a change. The whole “here is exactly who scored what points and how” GRTFL format is officially a thing of the past. From now on, I’ll be attributing points whenever the hell I want, to whomever the hell I want, based on whatever the hell I want. If you’re playing along at home, though, fear not: I’ll continue to provide scoring for marquee GRTFL shows like The Bachelor, The Challenge, and Survivor.

But this column needs to evolve into something less predictable and way weirder. Weird is good. The old GRTFL format wouldn’t have allowed me to address Ghostface Killah’s Couples Therapy appearance or offer my thoughts on Are You the One?, MTV’s new STD petri dish of a show. It would have forced me to write paragraph after paragraph about an increasingly boring Bachelor season featuring an increasingly less likable Bachelor.

With this new format, though, I can write about anything. So let’s start with Ghostface.

“Wait, wait, wait. Is that … GHOSTFACE? Rewind that, I swear that’s Ghostface, arguing with a woman with an intricately styled horse mane Mohawk, on Couples Therapy right now. This can’t be real.” 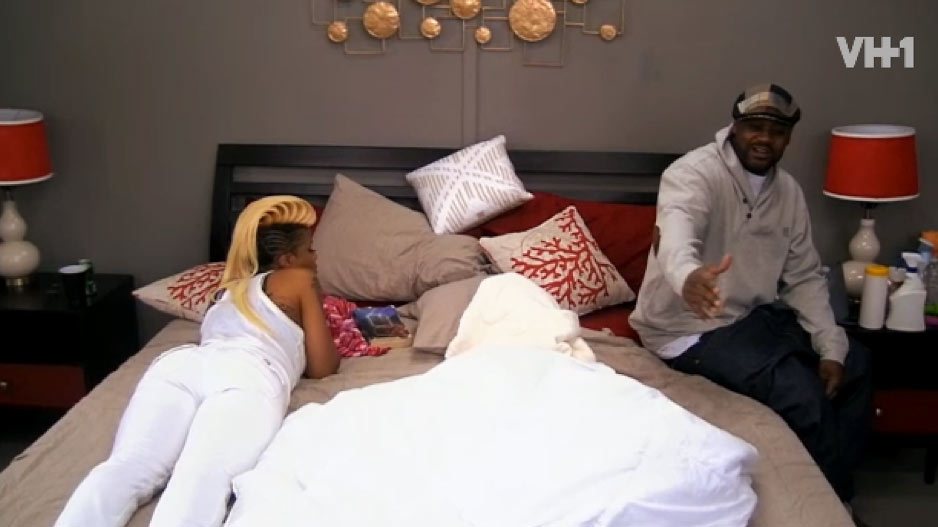 It is real, though. Too real. Wu-Tang Clan’s Ghostface Killah, one of the greatest rappers from the greatest rap group of all time, is on Couples Therapy alongside Jon Gosselin, Farrah the Sex Tape Chick from Teen Mom, and Taylor from The Real Housewives of Beverly Hills. It doesn’t make sense. I spent hours and hours wondering why one of the greatest poets and entertainers of our generation — not to mention a dude who can pull off any outfit — would be in relationship therapy on VH1 with a former stripper he’s been dating for only four months.

Because I care so much about his music, his career, and his well-being, I theorized and theorized. But I couldn’t figure it out. However, I do have five hypothetical scenarios that will be this week’s GTRFL Top Five. This week’s GRTFL Top Five is the Top Five Theories About Why Ghostface Killah Is on Couples Therapy, listed from “That can’t be true” to “Oh shit, I never thought of that”:

5. The theory: He legitimately wants to work on his relationship.

Debunked: Seriously, do I have to explain?

4. The theory: He needs the appearance money.

Debunked: I have no idea what Ghostface Killah’s finances are like. You could tell me he’s worth nine figures or you could tell me he’s broke and I would believe either. However, if you told me that going into nationally televised therapy with his new girlfriend was the best offer on the table, I just wouldn’t believe it. I mean, Love & Hip Hop is right there on the same network.

Debunked: When you’re a rapper named Ghostface Killah, going on Couples Therapy isn’t the best way to expand into new demos. This audience is not the fertile soil in which Ghostface should be sowing his seeds.

2. The theory: He thought this was a group-sex retreat show.

Debunked: Well, I have no proof otherwise.

1. The theory: He thought Dr. Drew would be there.

Debunked: This is actually the only thing that makes sense. I would do anything to spend four hours a day with Dr. Drew. I can only assume Ghostdini feels the same way.

Ghostface, we at Grantland love you. If you ever need to talk, just reach out.

If you’ve been watching Real World this season, you know who SmAshley is. If you haven’t, allow me to quickly explain. “SmAshley” is the alter ego of “Ashley,” a cast member on Real World: Ex-Plosion. Ashley is a chill, cute young lady with a sunny demeanor and empathy for those around her. SmAshley, the Hottest and Messiest of Hot Messes, is a nightclub-dwelling nocturnal creature spawned from plastic-bottle vodka, bad fashion, and desperation; she travels exclusively via simulated coitus, threatens to purchase her roommates’ families, and throws pans of burgers and burger grease into peoples’ faces for absolutely no reason. Alas, Ashley and SmAshley are no more. After an evening out, SmAshley disappeared for four days, and when she asked to come back, the roommates voted to keep her out of the house. It was probably the right call, but it was still somewhat disappointing, because she was truly fascinating to watch. SmAshley is a legend gone too soon, and we’ll always be left asking “What if?”

In honor of your legacy, SmAshley, I’d like to run back through a series of still frames of you doing what you did best, traveling via coitus: 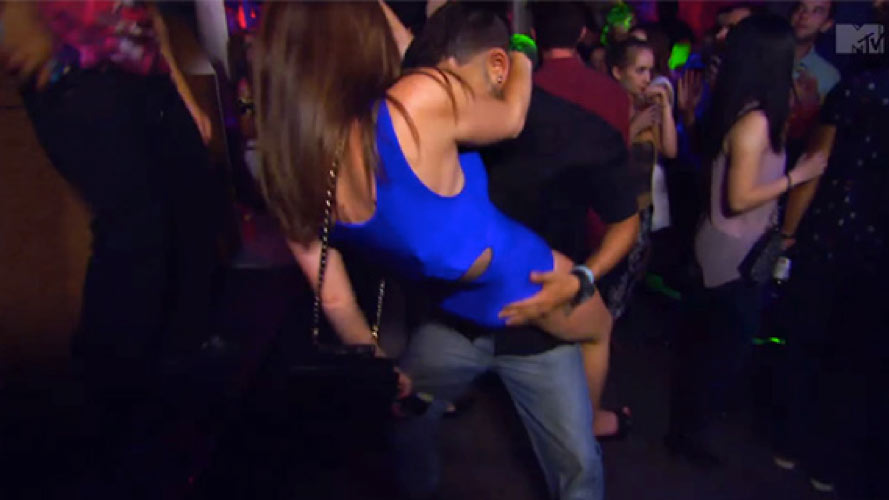 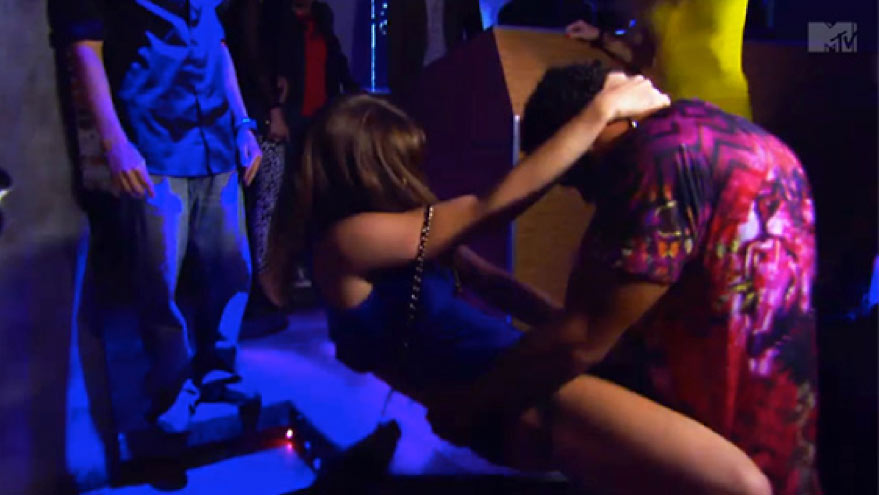 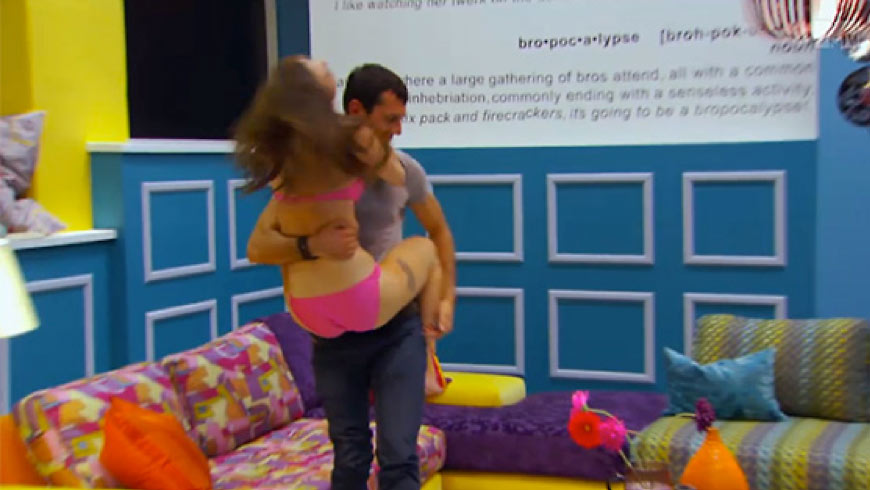 May you coitus off into the sunset atop the man of your dreams. Be well, my princess. (Also, shout-out to everyone on Twitter who gave me the nickname SmAshley.)

What EXACTLY Is Are You the One?

Here are the facts: There’a a new show on MTV called Are You the One? On this show, 10 men and 10 women live in a house in [Ma$e voice] H-a-w-a-i-I. Everyone has a “perfect match” in the house. Everything else is unclear, which is why Are You the One? is the GRTFL Questionable Moment of the Week:

How exactly did MTV determine each person’s perfect match? How will the contestants split the million-dollar prize? Is this all a science experiment cooked up by some evil genius trying to take over the world by creating a super STD? Where did MTV find this host? Did that one dude really respond to the chick who described herself as “an anomaly” by saying he’d describe her as “a black girl”? Why are there so many iPads? What does the laser scanner in “the truth booth” do? Can we just cancel this show and start over with a new show called Truth Booth? Am I just old, or is everyone under 24 an idiot? Does anyone understand the format of this show? Do people get voted off? Does that young man have a David Bowie tattoo? Do these people realize that splitting a million dollars will net them each, like, $30,000 a piece after taxes? Why am I going to watch every episode of this show anyway?

For GRTFL Super Scorer Caitlin Mangum, The Bachelor Is a Series of Worst-Case Date Scenarios

The Juan Pablo bigot thing bummed me out. Also, this season has been kind of boring, so I decided to scale back Bachelor coverage this week. But I never sent that memo to GRTFL Super Scorer Caitlin Mangum, so she sent in this hilarious write-up of her thoughts on the dates from the first three episodes:

Chelsie’s date this week, though, was the culmination of it all. Here are the Top Five Most Cringe-Worthy Moments listed from from “Eh, all first dates are a little awkward” to “Celibacy seems like a better option.”

5. Someone sings to me in the car, but I don’t know the words, so I can’t sing along. Thus, I’m resigned to awkward chair dancing and mumbling in (somewhat) harmony, all while looking like a complete idiot. There’s nothing worse. This must be how that third member of Destiny’s Child who no one knew felt for all those years.

4. Man wears clothes that don’t fit properly. Juan Pablo, why are you shopping for clothes at Gap Kids?

3. Crying on a first date. Right, wrong, or indifferent (probably right), women are already labeled as emotional and crazy. There’s no better way to underline that than by shedding some tears two hours into your first date.

2. Being told “just do it for me.” Self-explanatory.

1. Eating a bunch of unfamiliar fried food before hurtling off a large object. Brings back bad memories of an incident involving the lifeguard stand at summer camp in 1995.

But in the end, Chelsie and Juan Pabs took both the metaphorical and literal ABC-sanctioned leap of faith, capping it off with their best Spider-Man upside-down kiss impression (5 points) … which, by the way, I’m also adding to the list of my worst dating nightmares.

Here are the scores I tallied for this week, and I will add them every week if you have your own league at home:

Andi
5 points: Open-mouth kissing (making out in the concession stand)

Chelsea
5 points: Female crying (when she’s not sure if she’s going to jump off the bridge)
5 points: Open-mouth kissing (while hanging upside down)

Clare
5 points: Female crying (in the bathroom, about “fading into the background”)

Christy
5 points: Female crying (when she gets kicked off)

Lucy
5 points: Female crying (when she gets kicked off)

OK, it’s me again. I look forward to this column getting weirder and weirder in the coming weeks. Next week, I think I’ll dive into the Kendrick Lamar–like whiskey pool that is CMT’s Party Down South, and eventually I’m going to have to spend 6,000 words addressing the Paul George of GRTFL, Stassi from Vanderpump Rules. By the way, Vanderpump Rules is secretly one of the best pieces of art our species has ever created. If you aren’t watching it, catch up and check the column next week for more. Enjoy your weekend.

#Biebergate: Juxtaposition Is the Sincerest Form of Asshattery