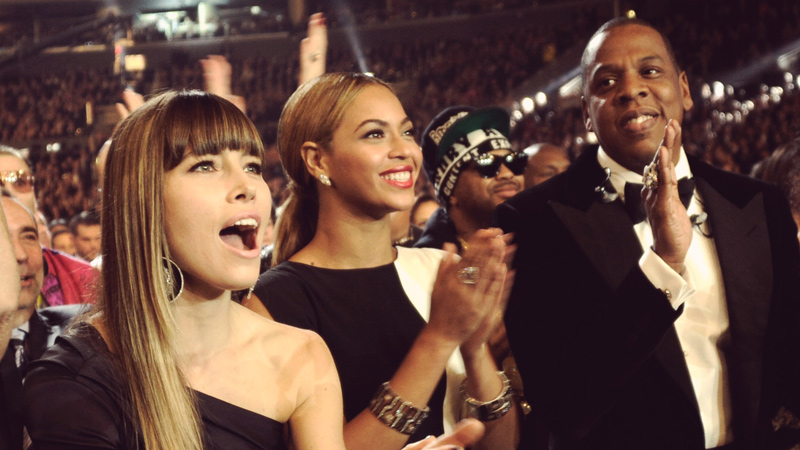 The Grammys are this Sunday, so it’s time to make all the important predictions. But before that, here’s an amazing thing that exists.

Just fantastic. It’s not presented as a simple search to see who’s nominated. It says “are YOU,” which is so much better. Imagine, at this point in the game, not knowing if you were up for a Grammy … but then finding out that there was an alert atop the Grammys homepage. And then actually clicking “here.”

And then clicking on the letter “J” and scrolling down:

And then seeing your name, exploding with joy, and then clicking it, to then learn you’ve been nominated for all of the Grammys.

And then, still in shock, deciding to provide your contact information, so as to avoid any future last-minute happenstance Grammy stumble-upons.

And then submitting the information to make it all official.

So, yes, just know that this exists. And it might be worth it to check for yourself. Who knows, maybe the audio to some Vine you posted ended up on Red. You never know.

24. He will call out Brad Paisley in the crowd and say “My man, what a year.” (Unconfirmed, but fingers crossed.)

22. Beyoncé will end the performance by rubbing her belly again. (Unconfirmed, but BLUE NEEDS A LITTLE BROTHER.)

20. Justin Bieber will come out during their performance of “Radioactive Money Trees” in a wheelchair and perform “Murder Was the Case.” (Unconfirmed, but someone is weighing the pros and cons of idea in #TeamFreeBieber.)

17. Because Macklemore has said that he shouldn’t win in some of the rap categories he’s nominated for, he will win two — if not all three — of the three rap categories (Best Rap Song, Best Rap Album, and Best Rap Performance). (Unconfirmed, but it’s how these things work, after all.)

12. Lorde will accept her Grammy for “Royals” with Rick Ross. (Unconfirmed.)

11. The Macklemore/Ryan Lewis performance will just be a retelling of the final scene in V for Vendetta. (Unconfirmed.)

10. Marc Anthony, Ginuwine, 2 Chainz, Jared Leto, and Chicago will be sitting very close to one another. (Confirmed.)

Grammys Seating Chart: Hey Marc Anthony, you're gonna have an Oscar nominee behind you! Say hi to @JaredLeto for us! @marcanthonypr #jaredleto #30secondstomars #marcanthony #grammys #grammyseatingchart

9. Leto will ask Ginuwine who is the first “T” in TGT. Ginuwine will pass him a note. It will say Tank. Leto will then tweet “just met TGT (Tank, Ginuwine, Tyrese) #brothers.” Tyrese will see the tweet and leave the Grammys. Ten minutes later, TGT will win the Grammy for Best R&B Album. Tank and Ginuwine will walk onstage and bring up new member Jared Leto. (Confirmed.)

8. If Kanye shows up at the Grammys, he will not win. If he skips them, he will win. It’s that simple. (Almost confirmed.)

6. People will talk about that. (Confirmed.)

5. Paul McCartney and Ringo Starr will sit next to each other and perform together. (Confirmed.)

Look who is sitting next to each other at the Grammys! We can't wait to see Ringo Starr and Paul McCartney perform! #grammys #thebeatles #ringostarr #paulmccartney #grammyseatingchart

4. Madonna will take a selfie with her neighbor Katy Perry. (Pretty confirmed.)

3. The caption will say: “With my girl Katy. Boo you better Roar. #disdarkhorseni**a.” (Unconfirmed, but highly probable.)

2. If so, she most certainly will not use asterisks. (Confirmed.)

1. Sara Bareilles will win Album of the Year, say in her speech that it’s a travesty Yeezus wasn’t nominated, dedicate her award to Kanye West, and all will suddenly be right in the world. (Unconfirmed.)