Good News for Us, Bad News for Drake: Kendrick Lamar Is Done F—ing Around 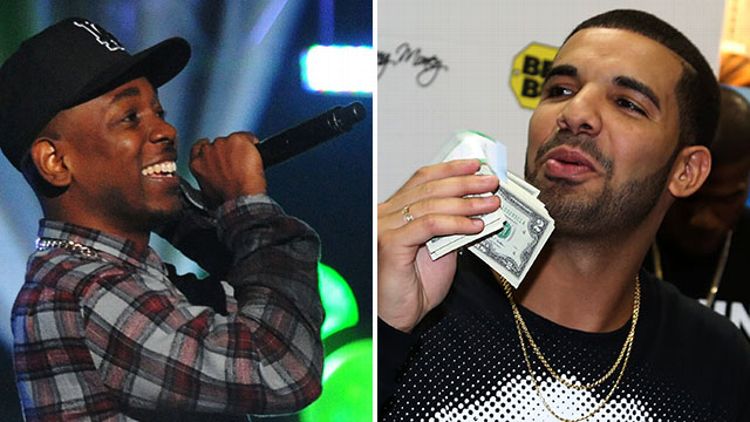 Kendrick’s “Control” verse unleashed a tidal wave of responses, but it was an inversely proportional kind of thing: Unlike the original shit-stirrin’ bars, most MCs’ retorts were bland and predictable and easily brushed off. You were either:

The one big, glaring exception in Kendrick’s roll call of death? Drizzy Drake.

In the last few weeks, Drake hasn’t shied away from batting down the verse. It hasn’t been out-and-out disrespect, really, but more of a clear-eyed assessment. He told Elliott Wilson that it was “all love,” and that he saw Kendrick five days after, at the VMAs, and that things were as peaceful as ever. But he did add: “Are you listening to it now? It was real cool for a couple of weeks but like if I asked you, for example, ‘How does that verse start?'”

And this, friends, was the right move. Of all the dudes on Kendrick’s kill list, Drake is the only one who is, at this point, unequivocally ahead. Which means he’s the only true target. And if you really are comfortable up there on the throne, you don’t get too salted at the rebellious villagers. You swat them away like an errant fly.

Later, with Angie Martinez, Drake went further: “You can’t just say that and then see me like, ‘Hey, man, what’s up?,’ pretending like nothing ever happened. That’s not real. To me, that’s not the nature of battling. There’s passion behind it. There’s anger behind it. I personally enjoy making great music and bodies of work over being the talk of Twitter for five days … In working your way up and sort of building relationships, I wouldn’t expect you to throw all the relationships out the door for the sake of being the talk of the Internet for 10 days. People don’t even care about it anymore.”

Well, now, hold that thought. The BET Awards were taped this weekend and, during the TDE cypher, Kendrick, presumably in response to Drake’s little media tour, fired off another bullet. “Control” was bold, but it was always couched in “friendly competition” vibes. This time? This time Kendrick is Not. Fucking. Around.

OK, sorry to get too hype about 15 seconds, but come on: “And nothing been the same since they dropped ‘Control’ / And tucked a sensitive rapper back in his pajama clothes / Ha ha, jokes on you / High five, I’m bulletproof / Your shit never penetrate / Pin the tail on the donkey, boy, you been a fake.” Sensitive rapper! Pajama clothes!

Maybe this was Kendrick’s plan all along: Kick it off with a technically buddy-buddy verse, wait till someone caught feelings, then unleash the real heat — knowing the whole time that he’s Kendrick Fucking Lamar and he can outrap anybody alive.

So what does Drake do now? Continue acting like he’s ignoring disrespectful serfs? Or get off the throne and take some shots? It might seem like a dastardly trap that Drizzy’s walking into (battle of words with Kendrick = land war in Asia). But, sensitive pajama clothes and all, the dude has been known to rap a little himself. And in this case, he’s got a more than worthy adversary on which to unleash the firepower of his fully armed and operational battle station.

Right now we’re in the inchoate stages, in the midst of the obscure little details that tend to get forgotten once the showdown blooms in full (years from now, there’ll be plenty of time to fully analyze Q and Kendrick’s awkward high five). But go ahead. Get psyched. We might just have a goddamn real rap beef on our hands.