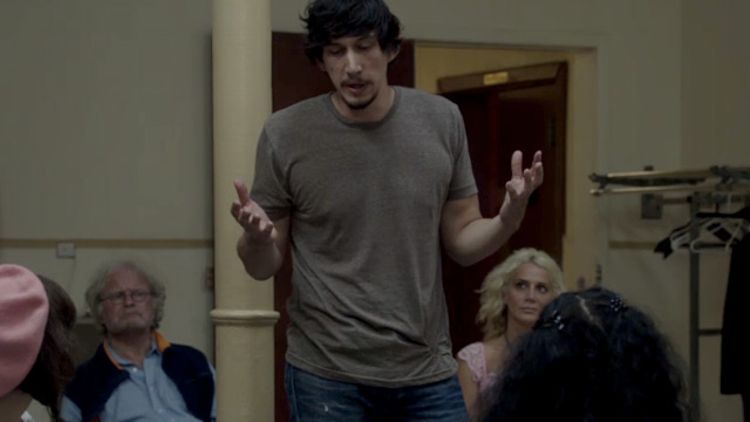 The girls of Girls like to try on new lifestyles the same way you would shop online; picking out items that look great on models in the carefully styled pictures posted on the site, then feeling stupid when it shows up as a physical package and doesn’t fit or look flattering at all. Maybe it’s cut for a different body type, maybe it’s way out of realistic price range, or maybe it’s just not made well and falls apart after a couple of wears. They keep shopping anyway, conveniently forgetting the past so they can pursue more fantasies of new personas they can try on, ignoring former magical items that ate holes in paychecks only to become bunched up dirty laundry on the floor, pretending not to remember how much they needed that wasted $50 to make rent. PVC dresses go from shiny to scratched to bottom-of-the-basket debris. Somehow, the lust to consume springs eternal.

Adam doesn’t shop; he scavenges. He makes things out of whatever he finds in the world outside. The streets of New York are filled with garbage just waiting to be repurposed into rustic furniture. If it doesn’t fit, it barely matters. It was free, and there’s more where that came from. Besides, he has tools. He can tailor practically anything to suit his needs with hammers, drills, and sandpaper. No matter what the original use or intention was, Adam will force it to fit. It can be a girl who just keeps showing up at his apartment until he feels conditioned to her presence there, or it can be some random chick suggested to him by a fellow AA pledge played by Carol Kane. His love is strange, but you can get it. Anyone else might duck out of the blind date with a stranger’s daughter, but Adam goes through with it and is rewarded with the real human connection he was looking for all along. Hannah’s OCD came back, which brought the return of her delightful parents, played by Becky Ann Baker and Peter Scolari. This time, all three were clothed, as Hannah dealt with her OCD, which involves counting to multiples of eight, and resembles Lena Dunham’s own number-focused OCD, which she opened up about in her Rolling Stone cover story. Although Hannah has mostly been able to control her obsessions before now, the groundwork for this revelation was laid last season when Marnie bluntly referred to Hannah’s youthful compulsive masturbation in their big blowout roommate breakup fight. This plot thread was uncomfortably painful for anyone who’s ever tried to publicly pretend they’re becoming an adult and then had to spend time with parents. Even though her OCD is so severe it threatens to limit the scope of her life and prevent Hannah from her goal of feeling everything, she hates thinking about and dealing with it because it makes her feel like a child. Being a grown-up then, is suffering silently and never speaking up about it, like the “suck it up and drink it off” philosophy of Don Draper (pre-Megan), or Tony Soprano before he starts going to see Dr. Melfi. But Hannah has neither omerta nor ’60s masculinity to contend with. The roadblocks here are Hannah’s enormous pride and her insatiable desire for control. A bubbly brunette with shiny Drybar hair, prone to wearing preppy modest dresses and talking solipsistically about men as she hunts New York think tanks for a startup billionaire to call her own. I couldn’t help but wonder: Is Marnie supposed to be Julia Allison, the Gawker-minted mini-celeb they blog-tortured for her spectacular public failures dating her way through New York’s many Mr. Big types? Or are Julia Allison and Marnie both just the same type of Jungian personality archetype as Charlotte York and Jackie Kennedy? Bloodthirsty for status and particularly wealth, but hiding it behind a veneer of pearls and broad ingratiating smiles. Is Taylor Swift a Marnie? Ambition only makes Marnie horny inasmuch as it pays off. She’d be equally happy with an heir who hasn’t had to work a day in his life. What she’s not interested in is being a loser by association, which to her seems to also mean working-class. The second Booth Jonathan’s reputation as an art star starts to downturn (and the prices drop along with it) she’ll decide she dodged a bullet. Now that Charlie can trade in his bus pass for town cars and cabs, Marnie suddenly wants to put it on his mustache again. Charlie is a fool but no idiot. He’ll pass. Plus after all her eye-rolling and negativity about Hannah’s desire for a creative prestige career, Marnie reveals that her private wish is to be a singer. She has a nice voice, but so do a lot of people. What she also has, that not everyone has, is the drive to rip out the throats of any other pretty girls with nice singing voices who get in her way. DAMN IT, SHOSH, YOU WERE THE ONLY UNCORRUPTED ONE. I was rooting for you! We were all rooting for you! The other least corruptible character was Ray, and now you’ve corrupted him. Let’s change the motto of Brooklyn from Eendraght Maeckt Maght (Dutch for “unity makes strength”) to NO ONE HERE GETS OUT ALIVE. Shoshanna has already realized that Ray’s not going to change for her and will never carry her purse at college dorm parties like she secretly wants him to. Rather than just dump him, she does the passive-aggressive thing and cheats on him with a random hot doorman and then hopes that either he’ll figure it out or her guilt will crush them both. What the fuck is going on with Shoshanna’s hair this season? I know it’s a fun joke to try out every dumb hair trend (blonde extensions, Heidi braids, donut bun, etc.), but doesn’t she ever have to do homework? Ugh, I’m a dork for wondering when she goes to class. I’m such a Lisa Simpson. The newly sexually active Shoshanna secretly wants to go out there and get her sea legs, even though the process of getting her sea legs will probably end with her wishing for another boyfriend as loving and annoying in a predictable way as Ray already is. However … college. Charlie sold an app! He sold an app to the product development branch of Slugline! Wait, Charlie makes apps? Since when does Charlie code? Well, you better lawyer up, asshole. The makers of Call Control are coming for your head. Your silly, fuzzy, beardy head, so full of dreams and ugly memories of how Marnie rejected you a billion times until you magically got successful overnight in a plot turn no one saw coming. Maybe most millennials have a few app ideas idly kicking around, but Charlie seems like the kind of guy who would work really hard on an app, watch it fail, and then never try to make one again. Instead, he ridiculously lucked out into a brick-and-wood, hashtag-pad workspace in Chelsea, which lacked the casual beanbag chairs that all fictional start-ups are required to have by Internet law. What it lacked in beanbags, it made up for in babely software designers and (ugh) lip dubs. This was possibly an inside joke about how Allison Williams, who plays Marnie, dates Ricky Van Veen, who co-founded College Humor and Connected Ventures. Ohhhhhh, Ray. You’re turning out to be the secret hero of Girls, the least-awful awful person. I wasn’t sure exactly why Shosh had to point out that Radhika is “the richest Hindi” she knows except to be weird and tacky, but it’s because she was trying to explain to Ray that there would be food at the party. Like, lots of food. Towers piled high with White Castle hamburger sliders, all for you to eat while your girlfriend makes vocal-fried small talk with other ethnic-American princesses. Radhika seems like a future Millionaire Matchmaker millionairess.

Maturity Level: Pour It Up He was fine. No, I mean, like, he was fine. What if we give him a spinoff with Bob Balaban? Call it Bob Balaban and a Hot Doorman.

Maturity Level: Not Good at Being a Doorman Come back whenever you like, Carol Kane. We love you. Why did you turn off Allison Portchnik, Alvy? You already know the answer: self-sabotage. Judy Blue Eyes! What it do?