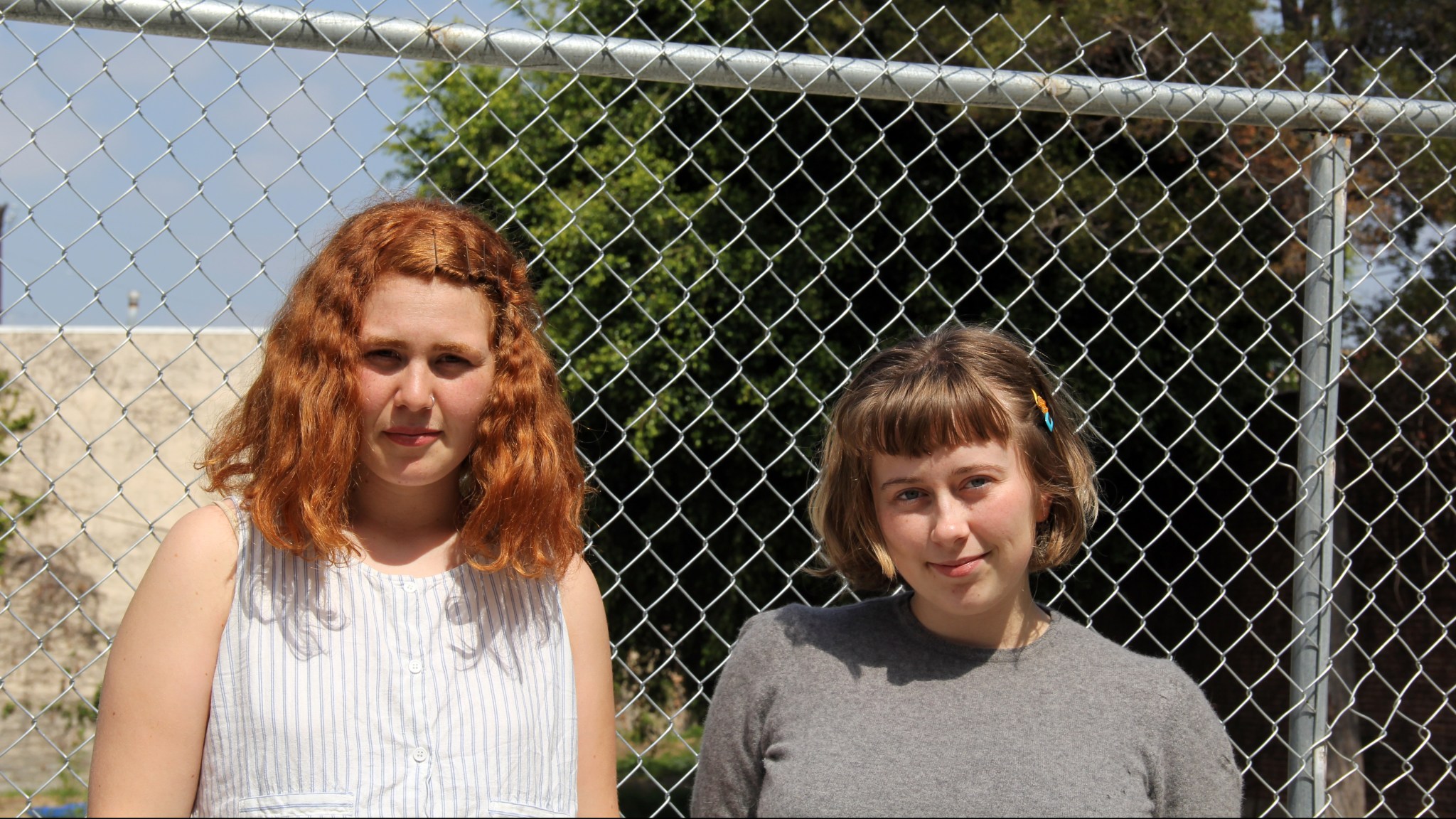 Twenty minutes before I was scheduled to meet the Los Angeles–born, Philadelphia-based teenage two-piece rock outfit that is Girlpool, bassist Harmony Tividad and guitarist Cleo Tucker were already awaiting my arrival. Sitting in a café across the street from the Church of Scientology Celebrity Centre, I found them dryly laughing over a headline Cleo had found in that morning’s Los Angeles Times. “Young people face a bleak future,” the headline read. “Since when is that news?” I asked. “I know, right?” Cleo replied, smirking.

I first encountered Girlpool two months ago; we were all booked on the same show at a Glassell Park house party. After my stand-up set, Harmony came outside and presented her phone. “This is what’s going on in Baltimore right now,” she said while showing me a video her friend had just shot of cops tear-gassing protesters. “I thought you’d understand.” When it was their turn to perform, they did so sitting down, singing micless on the floor in front of a couch filled with people who also understood. Harmony asked the crowd to take a moment to keep the people of Baltimore in their thoughts; we complied.

Girlpool is the band you wish you started in high school. If you did start a band in high school, it wasn’t as good as Girlpool. This is an irrefutable fact. Because Girlpool is better than any band composed of teenagers that has ever existed, a real-life the Stains from Ladies and Gentlemen, the Fabulous Stains. The rawness and vulnerability of their lyrics, combined with their social and political consciousness, both transcend and reflect their youth.

When asked to describe their music, Harmony says they write songs “about the self, and the environment, and how the environment interrelates to the self. We really enjoy thinking about, and exploring, how we feel in different environments. And in the bigger scheme of the environment, in the smaller scheme, in personal relationships, within the political structure of the world.” “Yeah,” Cleo nods in agreement, “it zooms out and zooms in.” When you talk to the two of them, you notice the frequency with which they back up each other’s points — conversation bleeds from one woman to another, flowing back and forth. They intermingle conversationally the same way they do sonically. The ease of their rapport comes through in their songs. “Even just the sounds are very conversational musically,” Cleo says.

The band’s lyrics, delivered via gripping vocal harmonies layered over stripped-down instrumentation, lament the end of youth and the beginning of new, oft-terrifying investigations into the self. On the last track of their new album, Before the World Was Big, they sing, “My mind is almost 19 / and I still feel angry / I’m searching for the reason.” The blunt authenticity of their lyrics lies in stark contrast to the saccharinely nostalgic musical lamentations about the death of adolescence that middle-aged men in blue jeans write. This makes complete sense — after all, Cleo and Harmony are still young (18 and 19, respectively). They write about their feelings as they process them; they write about the world they see as it spins around them. “I was taught what to believe,” Harmony sings on “Ideal World,” the album’s first track. “Now I’m only certain that no one is free.”

No, they don’t have a drummer, and yes, they’re tired of being asked why this is the case. “‘Will you ever expand your sound?’ is the new way of saying it,” Harmony says. “It used to be, ‘Why don’t you have a drummer?’ and now it’s, like” — Cleo’s voice joins hers —“‘Will you ever expand your sound?’” They both laugh at the absurdity of the query. They don’t want a drummer. They don’t need one. Having another person join their tight partnership seems perverse at this point in the game; it would diffuse their connection.

Cleo and Harmony met a few years ago at The Smell, downtown L.A.’s all-ages punk venue; they possess a staunchly riot grrrl ethos, even though they were pre-fetal when riot grrrl was big in the early ’90s. Their work is profoundly, unashamedly feminist in nature; they don’t particularly give a shit about inhabiting traditional gender roles, realizing the futility of the lie that is conventional femininity. “I don’t really care about the clothes I wear / I don’t really care to brush my hair / I go to work every day / just to be slut-shamed one day,” they sing on “Slutmouth,” a song from their first EP.

They don’t really give a shit about the press, either, which has been courting them for a little over a year. “It’s hard to capture your identity in a piece,” Cleo says when asked to explain her reluctance to be interviewed. “It’s overwhelming to begin to explain all of you. We also want to stray as far as possible from idealization culture. It’s interesting how image is incorporated in playing music. It’s a mystery to me.”

“We don’t live to be media darlings,” Harmony continues. “We just care about making stuff that feels good.” Feeling good, for them, requires authenticity, normalcy. Cleo says that being put up on a pedestal by media coverage alienates the band from their fans because “websites and magazines have a lot of weight. They put your existence at a heavier weight [than the people reading them]. It just doesn’t feel real. It’s not real.”

That being said, she doesn’t inherently avoid coverage of other artists, but insists on taking it all with a grain of salt. “I enjoy reading pieces on artists that I like,” she says, “but I feel like there’s perspective to be aware of. There’s an equilibrium of people that I feel get lost in the distance, the unknown of how it all works and who gets picked to be spotlit.”

“Exactly,” Harmony concurs, “the hierarchy of it and the politics. I read articles on my friends a lot. But I’m not really interested in where they buy their face wash or whatever, you know? I just feel like that’s so far away from me. I don’t feel like that’s something I can resonate with.”

They choose to align themselves with publications, and with people, that reflect their own values — of which aesthetic perfection is not one. Neither wear makeup; they balk at magazines that are “heavily image oriented” and “reiterate idolization.” 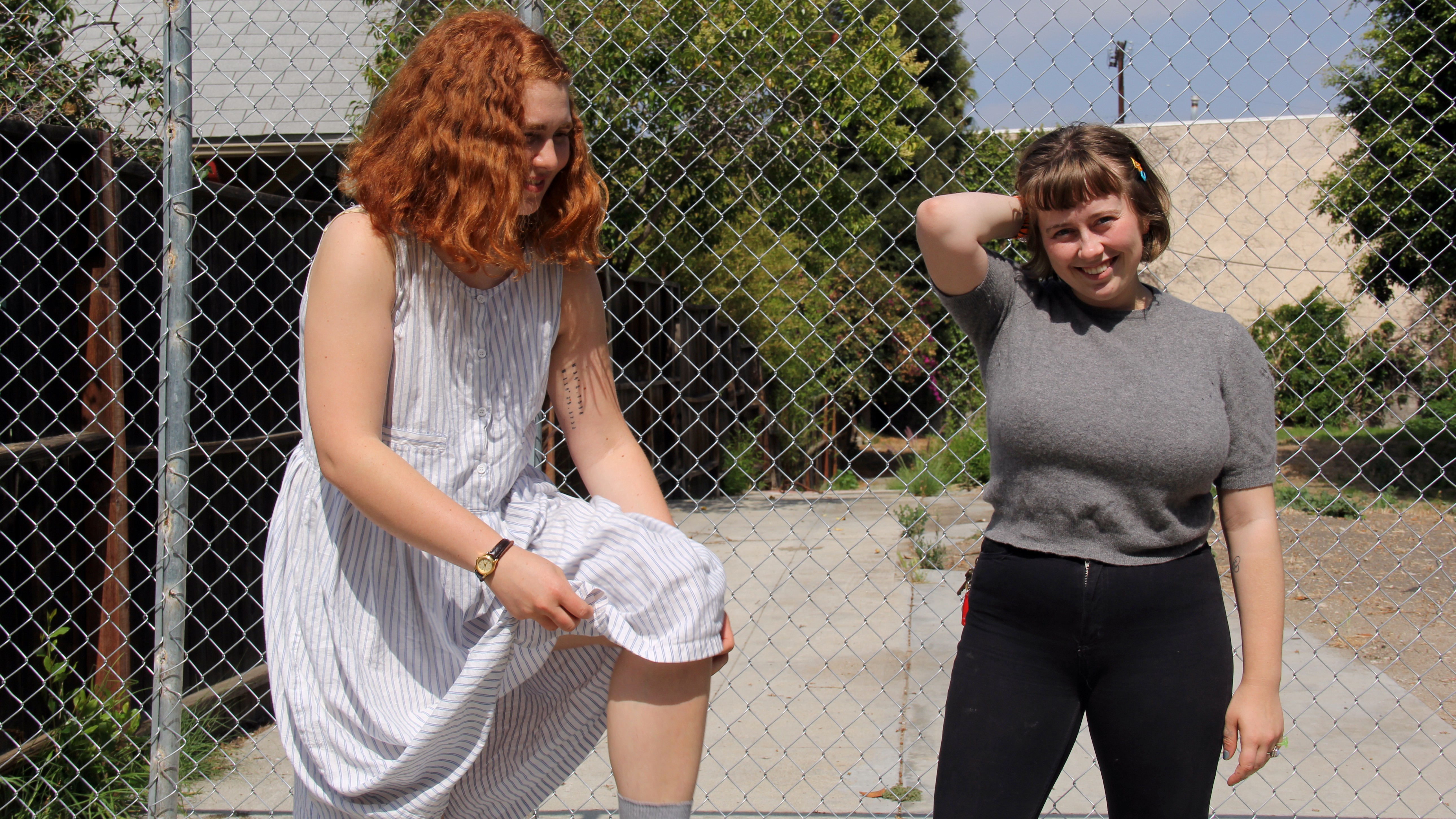 While image-oriented idolization culture surrounds them (they recently opened for Waxahatchee at the Roxy, a rock club smack dab in the middle of the appearance-obsessed Sunset Strip), they don’t feel the need to conform. “We grew up in L.A.,” Harmony says, “which is a place that is very centric to that feeling of — ‘be this idea,’ or whatever. There’s a lot of pressure to be different things here because there’s so much industry here. And I think because of that, we’ve grown and benefited from growing up here because we kind of can see what that is, and distance ourselves in a way that feels healthy and aware of ourselves and our context.”

“I feel like the music is an emulation of the conversation, of our words,” Cleo says. “And the words are an emulation of the conversation of our music, our playing.” “They’re mutually benefiting,” Harmony pipes in, “and that’s probably why we feel really intense about what press stuff we do and don’t do, because we feel so affected by everything we do. We don’t want to misassociate what connects. We feel connected in all these areas; why would we want to do something that would make us feel disconnected as a whole?”

“If we’re not feeling completely present and inside of something,” Harmony says, “it’s just aggravating. Because it’s like wasting an opportunity to be inside the feeling.” Cleo, nodding, agrees. “I think we just feel better, and feel good, when we’re intentional. And so, when we’re not thinking or aren’t aware of our intention, what’s the point?”

When asked if the image-driven nature of L.A. was why they decided to move to Philadelphia, they concur that it was definitely a factor. They have no time for pointlessness, claiming they “feel frustrated if [they’re] not intense.” In lieu of face creams, they prefer talking about concepts and ideas. “Discussing ideas is my favorite part about interviews, I think,” says Harmony.

Voracious thinkers, observers, and writers, they fill journals with stream-of-consciousness poetry and prose inspired by their environments. “Taking things in as deeply as you can and spitting them back out, all the time,” according to Harmony, is their creative goal. Inspiration, often the byproduct of each woman’s racing thoughts, can come from anything: “This morning — here, right before I came in — I was in the car,” Cleo excitedly says, folding her knees under her, “and I got really hot all of a sudden. It’s only, like, 70 degrees. And I was, like, ‘Why am I getting really hot?’ and then I started thinking, ‘One day, I’m gonna have hot flashes.’ That’s really crazy! One day this is gonna be a thing that happens. And then I was like, ‘Whoa. Aging.’ And then I was thinking about aging for, like, a really long time. I kinda wanted to sit and write about it,” she laughs. “I like that,” Harmony tells her, smiling.

What would they be doing now if not playing music? Cleo would be in school, she guesses — that’s what she planned on doing before they started the band. Harmony wouldn’t. To her, the idea of not being in Girlpool is so foreign, so beyond the realm of comprehension, that she can’t even put herself into that headspace. They plan on staying together “until the feeling,” Harmony starts, “is somewhere else,” Cleo finishes.

And thank god for it, as they are, in a literal sense, the future of rock and roll — a band so fantastic from the jump (their first, self-titled EP came out only seven months ago) that time will only increase their powers. When asked if their music will continue to evolve because they, as women, will continue to evolve, they answer in unison, “Yes.” No matter how powerful they get as people and musicians, though, they won’t give a damn. Because they’re people first, musicians second. And is there anything more refreshing than an egoless rock star?

As our conversation wraps up, Harmony looks at her phone, her face contorting into a look of shock. “Yung Lean’s dead,” she tells Cleo. Cleo’s first, knee-jerk reaction is of equal shock. “Are you serious?” she asks incredulously. After scrolling further through her phone, Harmony discovers it was just a rumor. Cleo, her voice filled with slight disgust, shakes her head. “I’ve never even listened to Yung Lean. Why do I care at all?”

Megan Koester (@bornferal) is a stand-up comic and writer who lives in Los Angeles. She was named one of L.A. Weekly’s “Top 10 Comics to Watch in 2015.”

Filed Under: Music, Girlpool, Los Angeles, Megan Koester, The Smell, Before the World Was Big, Waxahatchee