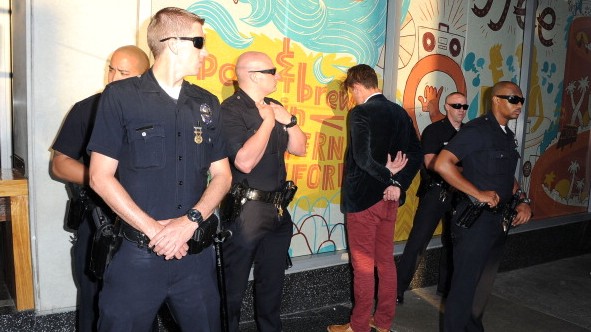 On Wednesday, at the L.A. premiere of Angelina Jolie’s Maleficent, Vitalii Sediuk — the red carpet troublemaker who’s nearly kissed Will Smith and successfully crotch-hugged both Leo and Bradley Cooper — struck again. According to the New York Times, “While Mr. Pitt was signing, and Ms. Jolie was posing for photographs, [Sediuk] jumped over a metal barrier and took a swing at Mr. Pitt, striking him in the face.” It doesn’t appear that Pitt was hurt: as Sediuk was hauled off in handcuffs, he went back about his business. And considering that the whole thing was a very confusing few seconds, and that this dude’s MO in general leans toward the nonviolent, it’s quite likely Sediuk was attempting some kind of light-slap/cheek-pinch situation rather than an actual face-smash. But still! That’s scary and extremely invasive. Worst of all: According to TMZ, the dude “lunged at Pitt … hitting him in the face and breaking the designer sunglasses he was wearing.” Designer. Sunglasses. Designer sunglasses. BROKEN. Sediuk!!!

So what the hell was the point? Who the hell knows! Failed gags are actually Sediuk’s thing. The 25-year-old works for a Ukrainian channel called 1+1, and so he is technically a journalist, although him being identified as one in reports seems to have rankled some folks in the biz. Personally, I’m more offended anyone is actually giving him the honor of being called a “prankster.” Because he is the worst. At pranking.

Here he is crotch-hugging Bradley Cooper, who is an extremely good sport about the whole thing, even though it must be a little scary to have a stranger grab you that strongly:

Here he is pulling the same shtick on DiCaprio, who is also, actually, totally calm about everything. I guess movie stars are used to getting their crotches hugged?

Here he is trying to work in for the smooch on Will Smith, who reacts with a shove and a slap-back. Perhaps Will would have been gentler with a female pulling the same stunt? Quite possibly so. But look at how Sediuk wraps his arm around Will’s neck and pulls him in. That is truly uncomfortable. I thereby decree Mr. Smith faultless in this situation.

At the Grammys, Sediuk successfully crashed the stage right before Adele came up to accept her award — but then just mumbled, and was briskly shooed away by J.Lo? Look at this: Adele doesn’t even notice he’s there. Soy Bomb is rolling his eyes so hard right now.

And then it gets worse! At Cannes, which just wrapped up, Sediuk crawled under America Ferrera’s dress.

So, how are you doing? That was one of the weirdest things that’s ever happened to anyone on a Cannes red carpet.
Of all of the things I prepared myself for, that was not one of them. [Laughs.]

It seemed kind of violating.
I agree with that statement.

The point being: pranks, at the very least, should be funny, to someone. They also shouldn’t, ideally, bum out the person being pranked, or make that person feel violated. In conclusion: Sediuk is a terrible prankster. He should stop doing pranks.

See all Know Your Creeps

Q&A: Norman Greenbaum Explains Why You’ll Never Stop Hearing His Song 'Spirit in the Sky' in Trailers Like 'Guardians of the Galaxy'