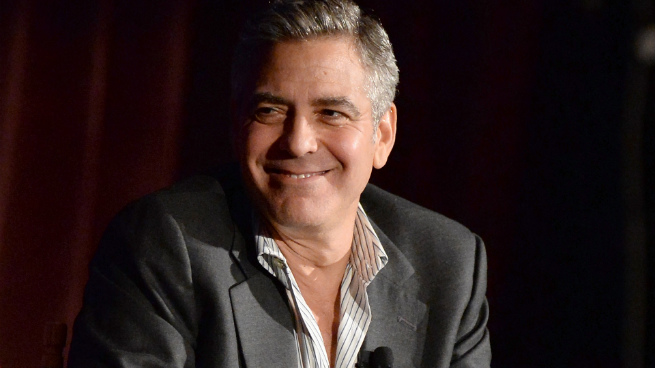 George Clooney’s fifth directorial effort is due this weekend, and if The Monuments Men manages to outearn The Lego Movie’s debut, Cloonz should be thanking his film’s marquee faces rather than its semi-dense premise (WWII intellectuals steal European art back from the Nazis). In order to wrangle his potentially thankable friends in the first place, though, Clooney had to be lucky enough to find all those big names willing to work for one-tenth or one-15th of their usual salaries, an amount the lord of Italian lakeside celeb-retreats calls “super cheap, like crazy cheap.” And who were these “one for them, one for Clooney” types? Cate Blanchett, Bill Murray, John Goodman, Matt Damon, and The Artist’s Jean Dujardin.

“If you pay everybody a full boatload, it’s a $150 million film,” Clooney tells Variety in a new cover story. Taking a page from Steven Soderbergh’s Ocean’s book, where name-brand actors were paid about a quarter of their usual salaries, Clooney kept The Monuments Men below its $70 million budget. The stars will get a nice part of the back end if the movie is successful. Jonah Hill recently took a big pay hit in order to work with Martin Scorsese on The Wolf of Wall Street. Hill reportedly worked for the Screen Actors Guild’s daily minimum, netting him $60,000 while Leonardo DiCaprio was said to have a $10 million contract. I don’t even know how to calculate how small of a fraction that is.

But wait, what was it like for Clooney to make his starriest movie yet? (OK, you wanna stump for The Ides of March as the starriest? That’s acceptable, too. Arguments can always be structured around films containing both the late Philip Seymour Hoffman and Ryan Gosling.) Well, one day it started snowing. “You couldn’t get fucked worse,” Clooney tells Variety, certainly all hunkered-down and Clooney-ish as he says it. And then those big expensive celebrities started actually helping out like they were just making a home movie with their pal George! “There’s John Goodman and Bill Murray and Matt Damon all picking up camera boxes and carrying them down this hill with the crew,” Clooney says. “Bill and John would come to the set when they weren’t even in scenes. It was really sweet.” I’m getting a strong sense that human altruism peaked with the production of The Monuments Men, like if I don’t see it then I don’t really appreciate everything Bill and John did for me or something. I mean, I’m thankful for you guys! I just really want to see those Legos jump and fly and be voiced by Morgan Freeman and Elizabeth Banks and Chris Pratt!

And while we’re sort of discussing why Blanchett and Damon and everyone did the movie for so cheap, can we talk about why they did it for so cheap? Is it because George Clooney really is as lovable and friendly with everyone in Hollywood as he seems and actors are falling over themselves to work with him even though he’s still way more of an actor than a director? (The Hill/Scorsese thing, for example, isn’t happening with any actor + George Clooney, Director.) Is it because The Monuments Men, which looks pretty good, has a really good script and is secretly going to be amazing? Or is it — CONSPIRACY THEORISTS, GATHER HERE — that The Monuments Men was supposed to premiere in December, in the thick eggnog of awards season, and the one-tenth-scale paycheck was a justifiable trade-off since it meant a good shot at an award nomination/career booster? And if so, how do the actors feel now? Because we all know how first-quarter prestige-tinted films fare in the following year’s award season, when people are going, “The … the what? The Monuments Men? The one about … wait, what the hell was that movie, seriously? I’m voting for the Daniel Day-Lewis thing that came out on Christmas and calling it a day.”

'The Bachelor,' Week 5: How to Decide Whether or Not to Have Sex in the Ocean