G.I. Joe: Retaliation: Why Was It Really Delayed? 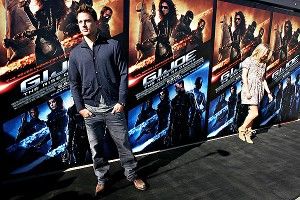 No one you know was more upset about G.I. Joe: Retaliation getting bumped from opening June 29 of this year to March 29 of next year than I was. I mean, by the time those Cobra banners unfurl on the White House, I could be dead! When Paramount announced the move last week, the reasons seemed sketchy: Really, converting it to 3-D? This is a good business decision five weeks out from its scheduled release date? Sure enough, now this cover story is starting to show its holes.

According to The Hollywood Reporter, a number of factors contributed to Paramount’s cold feet.

The last of these seems to be the biggest concern. (Warning: Spoilers follow.) The Retaliation trailer makes it fairly clear that Tatum’s Duke doesn’t survive past the movie’s first few scenes. That might have been fine had Retaliation — effectively a reboot that quickly dispenses with the characters no one cared about in the 2009 original — come out in 2011, when Tatum was the poor man’s Chris Evans. But 2012 Tatum has already had a couple of big films in The Vow and 21 Jump Street, so killing him off in Retaliation would be a bad strategic move for the franchise. The original Retaliation release date also would have put a dead Tatum opposite a live, lap-dancing Tatum in Magic Mike, so Paramount would have sacrificed its potential female/gay male audience, too.

Paramount’s move may be defensible from a business standpoint, but none of that mitigates the emotional toll it has taken on me. Do I care whether I see more of the charisma vacuum that is Channing Tatum? Not really. I want to see Bruce Willis pop out of a car trunk and start WASTING DUDES LIKE WHOOOOOOOOOA! The studio better hope that my blood lust holds steady for the next 10 months.

Requiem for a Ween