Fruitvale Station’s Michael B. Jordan on Tears, Impending Stardom, and Being the Object of Spider-Man’s Unrequited Affections 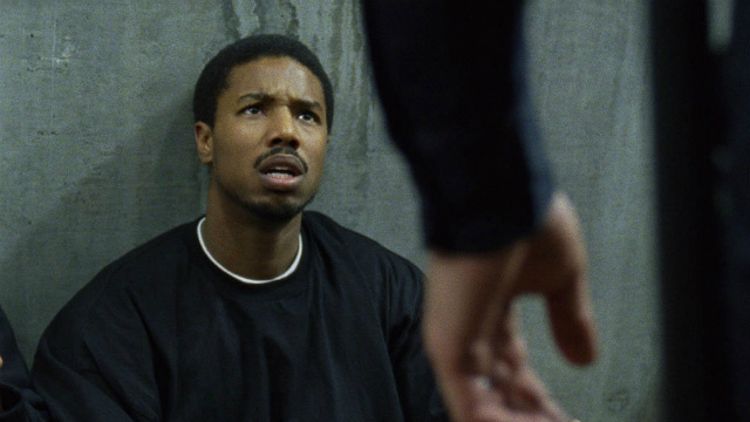 Michael B. Jordan first made you cry as Wallace, the doomed corner boy with the heart of gold from the first season of The Wire. Years later he showed up on Friday Night Lights, bigger and badder as East Dillon Lions star QB Vince Howard, but no less able to, yep, make you cry. (FNL showrunner Jason Katims was so enamored with the young man’s work, he briefly made him part of the continuing contingent of FNL-to-Parenthood exiles.) There were ascendant film roles, first in George Lucas’s Tuskegee Airmen drama Red Tails, then the nifty lo-fi sci-fi hit Chronicle. And now here comes his biggest role to date: Fruitvale Station, in selected theaters today, stars MBJ as Oscar Grant, the 22-year-old Bay Area man tragically killed by BART Police in the early morning hours of New Year’s Day, 2009. The film traces the mundane events of the day in Oscar’s life before the killing, doing its best to calmly and carefully ground the inflammatory, heartbreaking incident. And Jordan is on fire throughout the movie, swinging deftly, often within scenes, from oodles of pathos to nearly unbridled rage. And oh, goddamn, he’ll make you cry. Grantland spoke with Michael on the phone earlier this week.

We were supposed to meet in New York, but you had to go to the doctor about a broken hand. Hope everything’s OK?
Yeah, I had to throw my hand in the cast real quick. I broke it that morning but I didn’t have a chance to get it looked at, so I needed to get it checked out. I’m good now. The rest and the painkillers definitely help.

So as you’ve probably heard, Andrew Garfield more or less nominated you to be Spider-Man’s “interracial bisexual” boyfriend.
[Laughs.] You had to kick it off with that one?! Look, I didn’t take it any type of way. I laughed. I’m a huge fan of Andrew, he’s extremely talented, and I really would love to work with him. If it’d be under those circumstances, well … he said it in a joking way, I‘m not sure if he was dead serious. It’s cool of him looking out for me. I’m glad he has respect for my work.

You’re named after your dad, but you added your middle initial to separate from that other MJ. Did you ever consider a crazier stage name?
At one point I wanted to change it to my first and middle name, so it would have been Michael Bakari. But then I thought, I’m not changing my name — my father gave me that name, I’m gonna live up to it to the best of my ability. And hopefully, one day, they might consider me first before they think about His Airness.

It reminds me of that scene from Office Space, when Michael Bolton explains why he’s stuck to his guns: “Why should I change my name? He’s the one who sucks.”
[Laughs.] I can’t take any shots at Michael.

You’ve been on two Jason Katims shows now. Have you figured out what his secret is to making everyone weep uncontrollably all the time?
Man, he just wants it to be as real as possible. He’s incredibly talented at writing families, he’s a big family man, and he can pick up on the nuances among those families. It’s the things that are said behind closed doors, the things that people aren’t as open about — Jason gives you a sneak peek, to be inside those little microcosms. He writes good characters, he puts them in real situations, and he trusts you to bring them to the table. Usually the actors have room to create and play. The liberty to make some choices on our own, that’s the fun part, that’s one of the funnest parts of working on his shows. He trusts us to make the right choice, and it pays off.

Do have a favorite scene, either on FNL or Parenthood, where you got to ad-lib a bit?
Probably the episode where my dad came back. The first football game where he saw me play. Coming home after the game, he’s packing up his stuff — that scene, the subtleties of that was kind of on the fly, and it turned out to be something nice. It made me feel good, the choices that we made, on the fly. It mattered. Somebody noticed it.

The move to East Dillon was such an audacious move, and paid off so well. Were you familiar enough with the show beforehand to appreciate how crazy that was?
I’ve always been a fan of the underdog. I always root for the underdog. It was cool to break away from the fan favorites, the typical characters that people wanna see do well, and have the opportunity to put other people in the spotlight. I’m in it, so it’s hard to separate, even from the earlier seasons, as a fan. But you start to root for Landry, you root from him to get the girl, to shine on the field. I think there’s something cool about that.

I know people shout out “Where’s Wallace?” at you and things like that. But do people ever get angry at you about a decision that your character made?
I think that people are mostly content with the choices that [my characters] have made. But if there’s one, it’d have to be, “Why didn’t Wallace stay at his grandmother’s house?” That’s the one that people are still a little upset about. “Yo, you would have been good if you stayed at your grandmother’s house!” I’m like, “OK!”

You’ve worked for some of the best TV writers in the industry. Does that make you want to write TV yourself?
For sure. As far as taking a blank page and filling it up, I still aspire to do that. But it makes me want to contribute and be creative in television and film. I’m inspired by the way they write, the freedoms that they have, the complexities of the shows, the messages that you get without feeling like you’re being force-fed. The less-is-more approach is always so cool to me. Writing, down the line, that’s definitely something I wanna do.

A lot of people are looking at you as a breakout star. Do you get the sense that people are rooting for you, almost like a sports team?
[Laughs.] Um, yeah, everybody is asking me, “What’s next? What’s next?” I honestly don’t know. I just know one thing for sure: I wanna continue the work I have been doing, work I can hang my hat on and be proud of. I want a career like Leo. He hasn’t made any bad decisions. Gosling doesn’t have any blemishes on his record. Joseph Gordon-Levitt. Guys like that. I want that type of career. No matter what I do next, I want something with some heart, some integrity.

Your FNL co-star, Taylor Kitsch, was in a similar position after the show where he was scouted for stardom. And he’s really been knocked around for the choices he’s made.
I mean, that’s the thing: They love you one minute, they hate you the next. You can’t make decisions about what people are gonna think. You gotta go with what’s in your heart. And the one thing as an actor, you can’t stress over things you can’t control. It’s like going into an audition: Once you’re done, you throw your socks away. If it’s for you, it’s for you. You can’t do shit about it. And Kitsch is making the best decisions for him. You gotta look at the people behind those films. He worked with great filmmakers. Peter Berg, great filmmaker, I owe so much to that man. If he ever called me up to do a film, I’m gonna do it.

So if he called you to do Battleship 2, you’d say yes?
If he needed something, and it made sense for me, I’m in.

Your Bay Area accent in Fruitvale was great. Was there anyone in particular you were modeling that on?
You can’t imitate anybody. You have to be a representation of what Oscar was, what he stood for. When it came to the dialect stuff, anybody from up there, they all kind of sound the same. But specifically, me and [director] Ryan [Coogler] had code words. When my East Coast accent came out, I’d be like “water water water,” and he’d be like “WUTTER WUTTER WUTTER” — I’d get it, I would focus back in.

Ryan is so young, only 27. Was there any point at all during the shoot where you caught yourself wondering, Does he know what he’s doing?
None whatsoever. “First-time film director” and “Ryan Coogler” should not be in the same sentence. The guy’s a genius … have you talked to Ryan before?

I haven’t.
When you have a conversation with that man — within the first five minutes, I knew I wanted to do the movie. He knows exactly what he’s talking about, he’s passionate, and he’s no-bullshit. He had the eyes and ears of everyone on set, from the PAs to the lead actors to the catering. When he spoke, you listened. He’s extremely talented and I can’t wait to work with him again.

This is as angry as you’ve ever gotten onscreen, as far as I can remember. Did you find that it came natural? Was there a certain mind space you had to get into beforehand to get that angry?
Nah, man. It’s just acting. It’s just acting.

Video on Demand Report: Tina Fey and Paul Rudd Give You Another Chance to Get Into Admission

Trailers of the Week: Oldboy, The Canyons, Out of the Furnace, and More