Free iPads, Gigantic Mushrooms, and the Rise of the 'Buzzy Stunt': Is TV Advertising Getting Desperate? 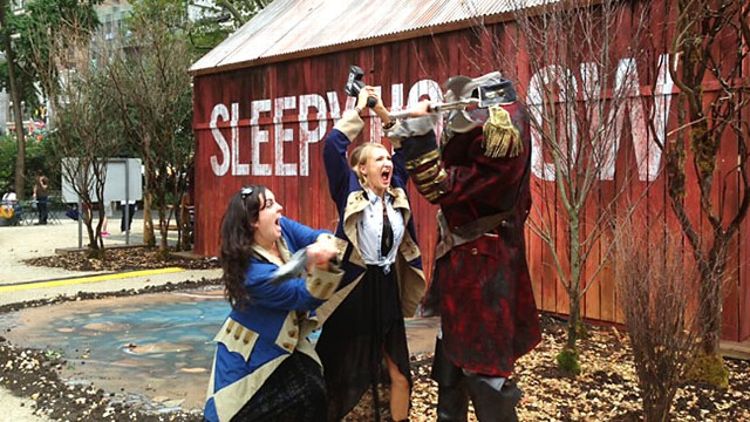 One of the most disconcerting things about being alive is how many interesting things happen every day that you never know about: the books you’d love but will never read; the movies that would change your life but somehow never make it onto your radar; the Internet that hangs on the vine, ripening, sweetening, and then eventually falling to the ground to rot, ignored by you accidentally forever. The YOLO and the FOMO, and if you want to go there, the PO-POMO: There is simply too much content sometimes.

The new generation of fall television seems to be gripped by a universal anxiety that you will ignore it, and, as The Hollywood Reporter detailed yesterday, the networks’ marketing and publicity departments are going all kinds of crazy in their isolated brainstorming chambers. It’s not that these “buzzy stunts” are all bad ideas — some of them are excellent ideas, involving $100,000 prizes (Lucky 7) and the placement of “eight giant mushrooms” along with “one life-sized rabbit” (Once Upon a Time in Wonderland) in various New York City locations — and everyone deserves points for getting creative and thinking outside the box (the head of CBS marketing told THR that “In [his] business, there is no more box”). However, it seems like the challenge the networks face in publicizing their shows this fall is not necessarily what they think it is.

Despite the oversaturated sprawling lawn of media, we’re still able to root out plenty of good stuff. Maybe this is because we can’t avoid it. If you want to feel like an alien, an outcast in your own feed wearing a burlap sack and a nasty note pinned to your back, try skipping all of your (and your friends’) favorite shows for a week. Endure the spoilers, miss the jokes, eat a bowl of pudding meant for four people and a bowl of spaghetti meant for 16 all mixed together, for you are clueless and alone. The social pull to become versed in “Ozymandias” and the Red Wedding is strong, and it can feel almost like your responsibility to dip a toe into the pool that your social network happily splashes around in weekly. Gimmicks are great when they ride in on glistening thoroughbreds — a barrel of Breaking Bad, the Bluths’ traveling banana stand — but in advance of the product, the gimmick can seem a little desperate. The Goldbergs may be great, or its pilot may contain, as IGN recalled, “too much yelling” to make you want to hang out in its version of the ’80s. You know what also seems like it’s yelling too much? The Goldbergs’ ad campaign: the website, the Tiffany concert, the iPad minis and Rubik’s Cubes mailed to thousands of people named Goldberg. What should be exciting (mysterious free iPad!) instead comes off as a little suspicious, too generous to be the anticipatory bugle before a great show. It seems like the prologue to a story in which a viewer gets called by a stranger who whispers into the phone, “Hey buddy, you watch The Goldbergs? You like it? You wanna blog that? You remember the iPad I sent you, right Goldberg? Yeah, yeah. You know Rotten Tomatoes does TV now, right? Yeah. You liked going backstage with Tiffany, right?” and so on, until the TV and laptops explode in simultaneous blasts of light and a voice screams out into the dark night, “NOOOOO!”

The weirder the tactics employed by these shows, their advertisers think, the better their odds of creating that elusive “social chatter” that is so very important to their program’s reception. It has been proven to be scientifically impossible not to Instagram yourself next to a giant mushroom in Tribeca, and if you happened to order The Originals’ vampire juice cleanse — sorry, “blood cleanse” — I’m guessing you’re planning to Tumblr that shit (otherwise, what are you doing with it? I hope not drinking it). The further you stray from your original material, though, the more you risk discrediting it. By the time the show debuts, it already feels oversold, and, perhaps even worse, it seems like it was shilled by a guy at a desk who still doesn’t quite get what you and your loony tunes buddies are up to late at night, spraying hashtags on the walls of revered old establishments. Advertising is a mirror that shows you how old you are, reflecting your demographic back at you as you shift from Peggy to Pete to Don to Roger to Bert. Often it’s an imperfect reflection, more like a caricature, which is why there’s still something so clumsy about a hashtag appearing on your TV when you’re watching MasterChef or The Bachelor. It’s like we currently exist in the gap between the existence of things like hashtags and their successful implementation within the broader cultural conversation. When they appear onscreen, it still feels like someone trying to make fetch happen. We’ll get there. We’re not there yet.

It will be interesting to see how the shows that have exerted the most effort in terms of publicity will fare. It could be that the most gimmicky of the bunch have the least to offer, and that the best indicator of a show’s quality will be whether it’s strategically leaked early or how its advertisers can manage to integrate genuine positive fan reactions into its platform — then again, maybe there’s something in that vampire blood cleanse that really gets you in the mood to obsess over a Vampire Diaries spinoff. Judging by the promotional plan of attack, this upcoming TV season may be one of the last of its era. The audience is one step ahead of the networks, because its attention, loyalty, and the reputation it risks when it recommends something without compensation is more valuable than even an iPad mini, and its worth only increases with each stunt aimed to capture it.

Grading the Top 10 Songs in … HEATSEEKERS!