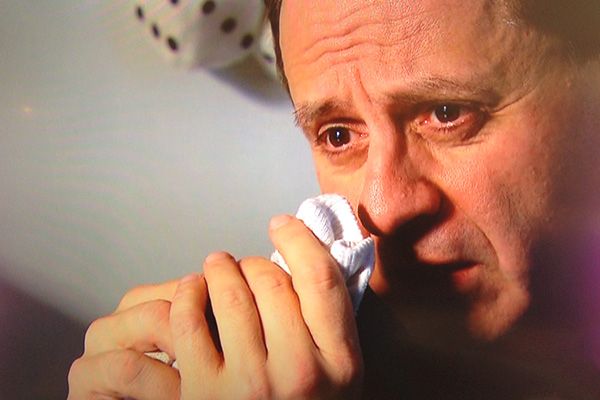 How Did He Get Here? Doug, who is gay, says he’s fetishized feet since before he was 4 years old.

What’s the Grossest Thing We See? It’s not the greatest to see Doug welcoming two male foot models to his house so that he can bring them to his makeshift foot-porn studio and film them — Guy No. 1 sitting in a chair, his legs wrapped around Guy No. 2’s shoulders, as Guy No. 2 rubs, smells, and kisses Guy No. 1’s feet. It’s also kind of off-putting to meet Roberto, a straight man Doug has enlisted to participate in Doug’s foot play for several years — while Roberto sits in a chair reading a magazine, Doug goes down on all fours to be Roberto’s human footstool; Doug lies on the floor and rolls back and forth as Roberto rests his feet on Doug’s face; Doug brings out a basin to wash and orally pleasure Roberto’s feet. But then we learn that Doug saves other men’s used socks in Ziploc bags, because he likes to put them in the microwave to reactivate their odors and have a nice long sniffing party.

What Have We Learned? As a straight man who is not into foot play himself, Roberto may be the world’s most charitable living person.

Who Is This Now? Courtney Stodden.

Why Are We Watching Her? She’s entered intensive inpatient therapy to help deal with some issues in her marriage.

How Did She Get Here? One might think the biggest problem she faces in her marriage to Doug Hutchison is that when they wed, he was 51 and she was 16. (At the time the show was taped, she was almost 18.) But according to Doug, the problem is that she dresses very provocatively and thus gets a lot of attention whenever they go out anywhere.

What’s the Grossest Thing We See? Courtney cheerfully says that she sometimes slips up and calls Doug “Dad,” and he concurs: “I’m raising my wife.” And he really does appear to be: As they walk up to the mansion where therapy will take place, he asks her, “You gotta go potty?” Also: It’s pretty ridiculous for Doug to complain that the public won’t leave him and Courtney alone when they are generally known to be publicity whores, but that’s not gross so much as just disingenuous.

What Have We Learned? Doug Hutchison and Courtney Stodden haven’t gotten any less revolting since you saw them last.

Who Is This Now? Margaret.

Why Are We Watching Her? We are initially led to believe it’s because she’s been experiencing headaches and nosebleeds due to a (literal) bug in her ear. But that’s only part of the story!

How Did She Get Here? In 1955, Margaret fell on a sharpened pencil that got lodged in her skull; she didn’t find this out until 10 years later, when she was hospitalized after being struck in the head with a large rock, and the foreign body appeared on the X-ray. The technology available to remove the pencil at the time — 1965 — would have left Margaret disfigured and possibly blind, so the doctor advised against it. But now, post-ear bug, Margaret can have the pencil removed.

What’s the Grossest Thing We See? As though it wasn’t bad enough for Margaret to be impaled with a pencil, bludgeoned with a rock, and then involved in a car accident during which blunt force trauma caused the pencil to break inside her skull, after all that Margaret also develops a pseudo-tumor around the larger pencil piece. And we get to watch actual footage as the doctor “shaves away the fibrous lump around the pencil.”

What Have We Learned? Margaret’s spectacularly bad luck should be studied by doctors.

Who Is This Now? Shanna.

Why Are We Watching Her? She’s hoarded so badly that the city is fining her $250 a day until she cleans it up; if she doesn’t pass inspection, she’ll lose the house.

How Did She Get Here? Thirteen years ago, she moved in with her hoarder mother. Now her mother has passed away and Shanna has continued to hoard on her own.

What’s the Grossest Thing We See? If you have a sensitive gag reflex, please stop reading now. I am very serious about this. If you continue reading past this point, you forfeit the right to get mad at me for whatever involuntary physical reaction you experience. And here we go … starting … now.

Shanna’s house has septic issues that need to be dealt with every four years. But her mother stopped addressing them and Shanna hasn’t picked it back up since her mother’s death. Her mother therefore had to move her bowels into bottles filled with dirty water. But since her mother also (for reasons that are never explained) “did away with garbage service,” all those bottles of waste are still in the house and out in the yard. As for Shanna’s toilet habits: She does her business in a large bucket. When that bucket fills up, it’s too heavy for her to lift, so she transfers some matter into a smaller bucket that she then chucks out into her front yard. (Matt also sees used tampons lying here and there on top of the standard hoarder’s garbage.) But wait! It gets worse! Questioned about her hygiene by Extreme Cleaning Specialist Matt Paxton, Shanna admits that she doesn’t wash her hands between handling her makeshift portable toilet and eating, so not only is all her food expired or moldy, but by Shanna’s own estimation, she’s “been eating poop for 12 years.” Shanna later tells Matt and therapist Dr. Robin Zasio that before cleanup is over, she wants to eat some of the contaminated food, as a last “blaze of glory,” like when addicts on Intervention have one last fix, but if Matt and Dr. Zasio allow this to occur, the show’s producers don’t show us.

What Have We Learned? Dr. Zasio has the power to cause people to be removed from their homes because they have shown themselves not to be responsible enough to live on their own, and yet somehow she does not exercise this power every week.

Watch the episode here (if this sounds like your kind of thing).

The jam-packed fall TV season has turned Tara Ariano into a “fibrous lump” on the couch.

Louie's Sitting Out a Year