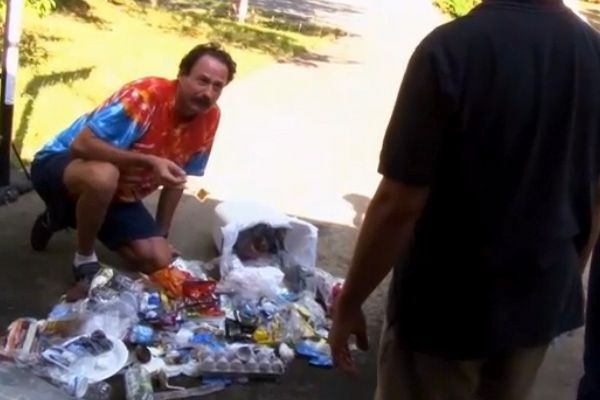 Why Are We Watching Him? He’s visiting friends and proving to be a kind of unconventional houseguest.

How Did He Get Here? Even though he’s in his 40s and obviously barely knows the Wilsons, he’s invited himself to stay with them, because he is extremely cheap.

What’s the Grossest Thing We See? To thank the Wilsons for letting him crash on their couch, he offers to make dinner, and we see every part of the process: haggling over the price of the salmon heads and carcasses he intends to serve; apparently overcooking the meat; turning what’s salvageable into “chowder” (milky fluid with something green and, apparently, some salmon bits in it). He also sets out the cooked heads on the table and encourages his hosts to dig in; the Wilson kids are not into it, and neither am I.

What Have We Learned? Sometimes it’s worth it to spend more than Jeff’s $1 a pound for the food you eat — and, more important, the food you intend to feed to others.

Why Are We Watching Her? She’s clashing with her couples’ therapist, Dr. Jenn Berman.

How Did She Get Here? Courtney’s inappropriately sexy wardrobe has been distracting to the other couples in therapy with her, so Dr. Jenn has instituted a dress code, which Courtney is openly defying.

What’s the Grossest Thing We See? Before Courtney decides to ignore Dr. Jenn’s guidelines with regard to her clothes, Courtney allows Dr. Jenn to take her shopping and returns to the house in a clingy (but not indecent) tank top and pretty-tight jeans. Fellow patient Nik notes the change in her look, and commends her — fairly sincerely — for what he terms her “sacrifice.” In response, Courtney squeezes her breasts together with her hands and simpers to Nik, “These clothes aren’t stuck on me. They come off.” In an interview, Nik shrugs: “I apologize, Doug, because I think your wife wants to f— me.” Courtney’s sex-kitten routine does seem like something she can’t turn off at this point, but still, I’m not sure Nik is wrong. Oh yeah — and later, defending her revealing costume to Dr. Jenn, Courtney calls herself a latter-day Erin Brockovich, standing firm on the comparison even after Dr. Jenn says that she knows Brockovich personally.

What Have We Learned? If you ever find yourself in group therapy with Courtney, you probably aren’t going to get a lot of good therapeutic work done.

Who Is This Now? Roosevelt.

Why Are We Watching Him? His parole officer has suspicions that he’s living somewhere he’s not supposed to.

How Did He Get Here? He was convicted of sexual misconduct with a teenage girl, for which he served two years in prison; he’s already violated his parole once by making contact with his victim.

What’s the Grossest Thing We See? Roosevelt is frustrated by the terms of his parole: He hasn’t been able to move back in with his wife because she lives within 1,000 feet of a school, which Roosevelt is prohibited from doing. But although the rules for his parole are very clear, Roosevelt keeps arguing with his parole officer, Gerald Carter, reiterating that he’s “not a violent predator.” (Gerald lets us know that, as far as the law is concerned, there’s no distinction between “violent” and “non-violent” sex offenders; what anyone could possibly qualify as a non-violent sex offense is beyond me, anyway.) Roosevelt can’t stop pushing his luck, finally confessing to having had dinner at his wife’s house, which he thinks is OK as long as he goes on a Friday night. “There’s no school going on on the weekend!”

What Have We Learned? Gerald probably should have had a GPS tracker on Roosevelt all along. Also, if you’re going to give your child a name as loaded as “Roosevelt Washington” — I swear that’s his full name — you should consider how ironic it will be if he grows up to be a sex offender.

Who Is This Now? Ashley.

Why Are We Watching Her? She’s scared to tell her mother and sisters that she’s pregnant for a third time.

How Did She Get Here? Her family already judges her for having her son Hayden less than a year after the birth of her daughter Avaia, who has cerebral palsy and, according to doctors, will never talk or walk and relies on her parents (mostly Ashley) for all her support. So Ashley fears further judgment when she has to announce that she’s having another baby.

What Have We Learned? DFH’s researchers are more diligent than I thought: Ashley and her family live in the relatively small Canadian city of St. Catharines, where I went to high school and college! I wish I could say I knew her.

Who Is This Now? Chris.

Why Are We Watching Him? He’s telling us about a medical calamity he survived.

How Did He Get Here? He accidentally swallowed the pull tab from a soda can. Two years later, all hell broke loose in his GI tract.

What’s the Grossest Thing We See? Apparently, what happened was that the jagged edges of the pull tab got stuck in his trachea, and the cuts to where the tab was lodged got infected. Over two years, the mucus and pus caused by Chris’s body’s detection of the foreign body just kept building up, until Chris just couldn’t stop trying to cough out whatever might be in his throat (the can tab having been ruled out as any kind of worry since it hadn’t shown up on any X-rays, so the assumption was that he’d passed it). Basically, Chris’s own immune system was strangling him … until one fateful night, when Chris coughed and felt something move. Long story short, Chris has to Heimlich himself, and “that blew everything out”: “And there it was, on the floor: pop can tab and tissue and blood and pus and crud.” What we see of this mélange is just something whipped up for the reenactment, but Chris’s description sells it so that it becomes very real and very gross.

What Have We Learned? Around a thousand people a year die of airway obstructions in this country, so if you’re planning on eating any peanuts, by God, be careful.

Tara Ariano will pass on the used fish, thanks.

Harrison Ford Is Interested in Reviving Han Solo — Possibly in Order to Kill Him?!