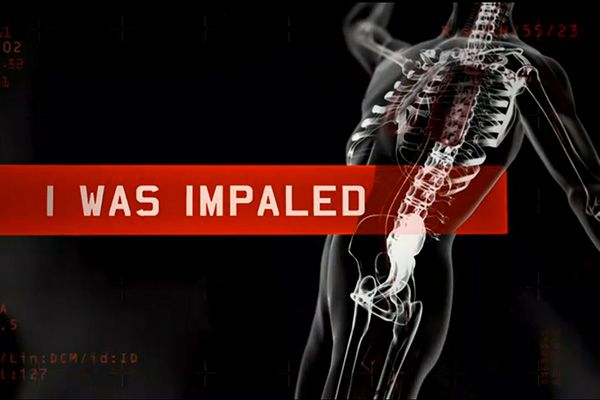 Who Is This Now? Chris.

Why Are We Watching Him? He’s telling the story of a traumatic injury he survived.

How Did He Get Here? He was helping a friend fix an old Rototiller when something hit him in the face (he thought it was a rock kicked up by the equipment) and his nose started bleeding profusely; an ER doctor diagnosed him with a cervical sprain. Several hours, more excruciating pain, and a CT scan later, the true culprit was identified: a three-inch pin had penetrated his face and ended up in his brain.

What’s the Grossest Thing We See? Eventually, Chris is moved from his small regional hospital to a facility in Denver, where a surgeon figures out why the pin isn’t where it appeared to be on Chris’s original CT: It’s FLOATING IN HIS CEREBROSPINAL FLUID.

What Have We Learned? Helping people will only end badly.

Who Is This Now? “Grandma” Duggar.

Why Are We Watching Her? Two of her many grandchildren are getting ready to take her out to a widows’ banquet at their local church.

How Did She Get Here? Several decades ago, she gave birth to a boy who would go on to father almost two dozen children, thus becoming the subject of a TLC reality show.

What’s the Grossest Thing We See? Following the death of her husband almost four years ago, Grandma Duggar moved in with her son and daughter-in-law, Jim Bob and Michelle, and since then has taken over doing the family’s laundry, of which she estimates there are some “70 or 80 loads” each week. You guys, that’s too much for anyone to do, never mind a nice old lady!

What Have We Learned? Though Grandma Duggar claims that her son’s family treats her with “a lot of respect,” her idea of respect does not include having anyone (either on camera or in the chyron department at TLC) use her first name.

Who Is This Now? Justin.

Why Are We Watching Him? He’s getting ready for his mother, Tammy, to return home (where he still also lives) after a week’s departure.

How Did He Get Here? As part of a social experiment, his mother and all the other adult women of Yemassee, S.C., have abandoned the town for a week, leaving the men to fend for themselves.

What’s the Grossest Thing We See? Even narrator Jeff Foxworthy knows that the dynamic between Justin and Tammy is unhealthy; though Justin had proposed to his girlfriend, Amy, just before she left town, Foxworthy’s voice-over refers to Tammy as “the love of [Justin’s] life.” Clearly, Justin is the love of Tammy’s life: When Amy gets off the train and races to Justin so that she can hug him before Tammy can, Tammy complains, “I don’t like to see Justin and Amy affectionate like that because Justin is mine.” To reiterate: (1) It’s just a hug, and (2) TAMMY IS JUSTIN’S MOTHER.

What Have We Learned? Though one would think the purpose of the “social experiment” was to educate the men of Yemassee about how much work the women in their lives do — work that they take for granted — the lesson was lost on Justin, who just dumps all the housework on his teenage sister Courtney. So as if Amy won’t have a crappy enough time in her marriage having to navigate Justin’s addiction to his mother (“I’m never letting my mom go away for a week again,” he tells the camera, with Amy standing right beside him, unacknowledged), she also shouldn’t count on him ever doing any housework at all.

Why Are We Watching Him? He’s hoarded his house so badly that it’s at risk of being condemned.

How Did He Get Here? Several years ago, Doug was in a terrible ATV accident; he was in a coma for 12 days, and when he woke up, he had total amnesia. Now Doug collects objects because he fears forgetting his new experiences.

What Have We Learned? Digging through trash — as Doug does — to find discarded lottery scratch tickets on the theory that they might be winners thrown away in error is not a great use of one’s time or source of income.

Tara Ariano does seven or eight loads of laundry a month.

Filed Under: 19 Kids and Counting, Hoarders, I Was Impaled, Reality TV, The Lunatic Channels, TLC

Q&A: Tom Scharpling on His Directing Career, His New Videos for Aimee Mann, and Working With Jon Hamm and Laura Linney