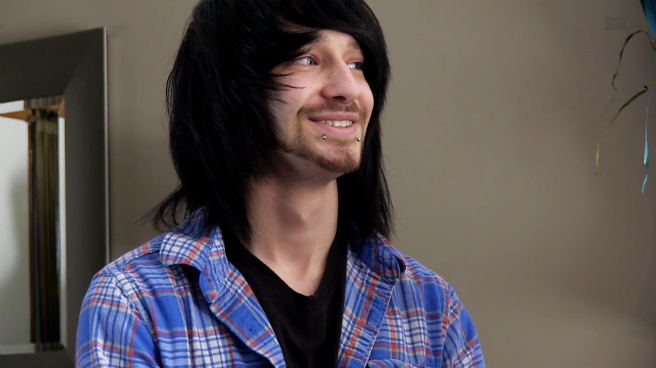 Who Is This Now? Elijah.

Why Are We Watching Him? Solana, an online friend he’s never met, has sought him out to see if she should try to start things up with him or stay with her current boyfriend.

How Did He Get Here? Elijah and Solana met six years earlier and struck up a friendship through Myspace, until one day he disappeared and she never knew why. He reconnected with her through Facebook, but she was never sure if he was the same guy from her youth.

What’s the Grossest Thing We See? I’m not going to act like Elijah’s hair is acceptable, because it’s stupid. It’s so stupid, in fact, that when we saw his brother go down to the basement to fetch him and then Elijah appeared, I wasn’t sure it wasn’t the brother in a new outfit and wig. But I had the decency just to think my mean thoughts about Elijah in the privacy of my home and also to post them on Twitter. Catfish hosts Nev Schulman and Max Joseph wait for their after-show, Chatfish, to make Elijah sit through a “hilarious” bit in which they’ve Photoshopped his hair onto various celebrities’ heads. A cut back to Elijah’s impassive face is accidentally the funniest moment in the whole 90 minutes.

What Have We Learned? Neither Max nor Nev has a future in live TV. Or (intentional) comedy.

Who Is This Now? Traci.

Why Are We Watching Her? She’s working on her marriage to Kevin in an inpatient couples’ therapy situation.

How Did She Get Here? When WeTV was putting together a “reality stars” season of Marriage Boot Camp, it decided to pull someone from Braxton Family Values and they went with Traci (sister to Toni).

What’s the Grossest Thing We See? Each boot camper has to go through an exercise in which they pretend they’ve survived a chemical attack: There are only three gas masks to go around, and one by one, they must decide which of the 10 boot campers gets them; they must also tell the people who didn’t make the cut why they’ve each been deemed unworthy of living. Traci is really not a good enough performer to be convincing as she tries to approximate anguish over the boot campers she’d leave to die if this scenario were real, making a big production of gasping and sobbing without actually seeming to muster much in the way of wet tears.

What Have We Learned? Firefighter Ryan (husband to Trista, the first Bachelorette) is generally agreed to have intrinsic value in an apocalyptic situation, and everyone else on this show will probably die horribly and quickly.

Who Is This Now? Kate.

Why Are We Watching Her? The sextuplets with whom she used to costar on Jon & Kate Plus 8 (she also has 13-year-old twins … and had a husband for a while) are about to celebrate their 10th birthday, so TLC is going back to the well for a check-in special.

How Did She Get Here? Fertility treatments.

What’s the Grossest Thing We See? In what is otherwise a pretty innocuous affair, Kate delivers a sly slam at her ex-husband by saying in an interview that the reason they still have chickens is that taking care of them constitutes the only “man chores” her three male sextuplets ever have to do, now that they no longer live with their father. I mean, is it really necessary for them to do anything with “man” in front of it? Because they’re 10. In fact, they’re not even 10 yet.

What Have We Learned? The Gosselin kids are lucky to have each other, because neither of their parents is worth a damn.