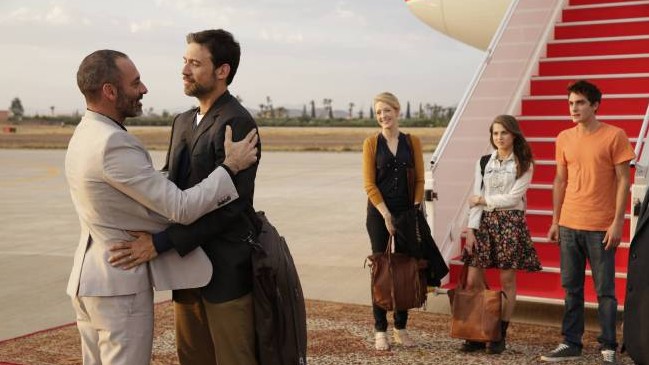 Tyrant, which premieres tonight at 10 p.m. ET on FX, has a backstory almost as dramatic as its premise. The idea for relocating The Godfather to an authoritarian Middle Eastern state was initially dreamed up by Gideon Raff, creator of the original, Israeli version of Homeland. After he brought the concept to Howard Gordon, the Saul Berenson of twisty American spy dramas (24, Homeland, TNT’s upcoming Legends), the two quickly sketched out a series about Bassam “Barry” Al Fayeed, the wayward second son of the unelected ruler of the fictional Gulf nation of Abbudin. Disgusted by the corruption and violence of his family, Barry fled Abbudin 20 years earlier and made a new life for himself as a pediatrician and family man in California. Tyrant would begin with Barry’s return home and gradually chronicle his reckoning with his country and his legacy. By the end of 2012, with the particulars planned out, the project ignited a bidding war among cable networks eager to land the next big thing. FX won out — apparently outmaneuvering HBO, FX president John Landgraf’s white whale, in the process — and quickly secured the services of Oscar winner Ang Lee to direct the pilot. The Emmys were practically winning themselves.

And then the bottom fell out. As explained in this firecracker of an article by The Hollywood Reporter’s Lacey Rose, Tyrant spent the past two years in more or less a perpetual state of putsch. First Lee bailed and then, after a falling-out with Gordon, Raff did too. Casting proved an enormous challenge, as did filming on location, first in Morocco and then in Israel. There were massive reshoots, both with and without Harry Potter helmer David Yates, whose cinematic shooting style apparently clashed with the demands of episodic TV. Gradually, it became apparent that no matter how grand a project is in ambition or reach, it still has to be squeezed into the same, hypercompetitive television window as everything else. Money and prestige can buy you plenty of attention, but not necessarily the kind that translates into ratings.

Still, it’s possible to catch glimpses of the world-beating show Raff and FX were imagining in the pilot that airs tonight. The opening scenes, in which Barry, played by English actor Adam Rayner, goes for a jog and shares breakfast with his cereal box–worthy family, do a fine job establishing the parameters of his carefully constructed life just before it comes crashing down. Not that he has anyone to blame for that but himself. For reasons that remain frustratingly inexplicable, Barry has decided to pack up his wife, Molly (Jennifer Finnigan), and two kids, Sammy (Noah Silver) and Emma (Anne Winters), and return to Abbudin for the first time in 20 years to attend the wedding of his nephew. They say you can’t go home again. Sometimes they ought to say it more loudly.

And so, before you can say “inciting incident,” the very American Al Fayeeds are winging their way to the other side of the planet on an otherwise empty 747 — all the seats were purchased in advance by Barry’s meddling father, Khaled. The hollow opulence of the unoccupied plane and the establishing shots of Abbudin that follow — juxtaposing the gilded insanity of royal life with the dusty reality of the city streets — serve as clever commentary on the broken nature of the country. (When Sammy marvels over the lack of traffic, the camera helpfully pans to the parking lot of commuters being held in place by armed guards until the family convoy passes.) If only the rest of the hour lived up to that promise.

Judging Tyrant solely on the strengths and far more abundant weaknesses of the pilot is essentially unfair — I understand that. (FX provided only one episode ahead of my deadline for this piece.) Many great series take three or four episodes to find their legs; others require an entire season. But in many ways the problems evident in this single hour are representative of TV’s growing movie problem: when the expositional gymnastics required to establish a hooky premise are so exhausting that they render the entire enterprise unappealing. (Think of the way superhero films now use two and a half hours to tell an origin story — often for the second time! — all in the service of setting up the sequel.) The story that Gordon is desperate to tell in Tyrant thrums in the background like a drum: He wants to return Barry to Abbudin, to establish him as the conflicted leader of a country wracked by conflict, and to put him on a bloody collision course with his hotheaded, Sonny-esque brother Jamal (Ashraf Barhom). But to get there, so many implausible or outright ridiculous things need to happen that it’s tough to imagine sticking around to see them pan out.

As played by the wooden Rayner, Barry is a uncharismatic cipher: We know he’s a good man because he cares for children; we know he’s capable of evil because, in a moment of weakness, he strikes his son. But this feels like heavy-handed nurture, not nature. Barry’s family is so strangely credulous of Abbudin high society, so uncurious about the country’s history of turmoil and strife and Barry’s own involvement in it, that it beggars belief. If my father-in-law were more or less Moammar Gadhafi, I would be considerably less inclined to suggest some old-fashioned American talk therapy as a way to heal old resentments. (If that weren’t enough, one glimpse of the cartoonishly thuggish Jamal — in a single hour he manages multiple rapes and the most violent nude-sauna fight since Viggo Mortensen sweated it out in Eastern Promises — would have me booking a return flight to the Great Satan pronto.) But that’s exactly the attitude of Finnigan’s dimly needling Molly. She’s the sort of half-imagined TV wife who waits until the apex of an international incident to announce that she’s having doubts about her 19-year marriage. And you’d think Gordon would have learned his lessons from the kids on Homeland, but the younger Al Fayeeds make me long for the depth of Chris “Late for Karate Practice” Brody. Emma has little to do but roll her eyes — this codes as “girl” in TV shorthand — so the lion’s share of the annoyance falls to Silver’s Sammy. Any wisp of interest — he’s an openly gay lax bro suddenly transported to a fundamentalist country — is airmailed out the window once he starts whining about being forced to get out of the palace pool.

FX deserves real credit for attempting to stage a drama in such unfamiliar settings: This is a show featuring a predominantly Arab cast, set in a part of the world that is generally seen only through the lens of a war reporter’s camera — or worse. But so far at least, the gulf between intention and execution is wider than the Dead Sea. Stuffed to the gills with soapy family psychodrama and syrupy political intrigue, Tyrant simply has no room for the detail and care necessary to get a story like this right. There are no specifics that suggest Abbudin is a real place with a real history, no idiosyncrasies that turn mechanized plot advancers into characters. In lieu of nuance, we get an old journalist friend of Barry’s revealing his torture scars and Justin Kirk, oozing smarm as an American diplomat, crowing, “In Syria and Egypt, there are firefights. Here? Fireworks!” The truth is, Tyrant’s pilot suggests a show less interested in exploring an unfamiliar region than it is in unspooling a very familiar story, especially on cable TV, about an otherwise decent man’s descent into violence and sin. And there’s certainly no need to fly halfway around the world for that.