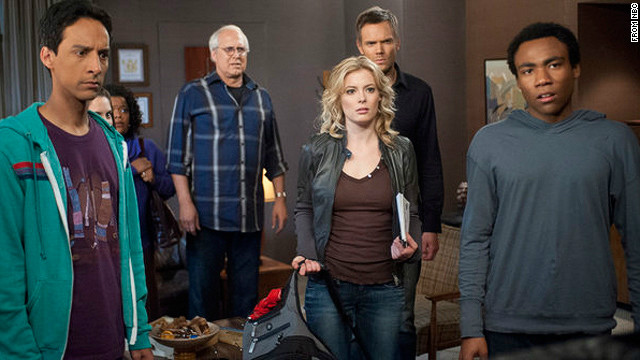 Community died today as it lived: frenetically and suddenly. The culty show that had improbably survived for five seasons, borne aloft by the impassioned frenzy of its tweeting fans, will now be buried with a 21-hashtag salute. Barring a miracle, there will be no sixth season. Barring an enormous lapse in judgment, there will be no movie.

Though I am not surprised, I am sympathetic. I completely understand the need to mourn the show’s passing. If you are among the many (but, clearly, not enough) 18-to-49-year-olds gutted by this decision, it makes sense to take some time to process your loss, to gnash your teeth and pray to the dread god Sarandos for a second — no, third — no, fourth chance. For you, today truly is the Britta of days. But when you’re ready to come out of the Dreamatorium, it’s useful to remember one thing: You already won.

That’s right, Community won. Eventually, even the most devoted Human Being will be able to acknowledge this. Consider: Community was a show that was practically doomed from the start. It was the cracked passion project of a deeply broken man, a malleable receptacle into which Dan Harmon was able to dump a lifetime’s worth of jokes, therapy, and pop culture damage. In its first three seasons, Community Trojan-horsed the most outrageous things imaginable into the heart of NBC’s once-proud Thursday night. There were extended riffs on action movies and art house obscurities, detours into Claymation, loving tributes to nerd culture, and unblinking examinations of heartbreak. Community mined its comedy from the unlikeliest of sources: autism, alternate realities, failure, and catastrophic failure. (In one memorable episode, it didn’t even try for comedy at all). Community was always clever, often funny, and occasionally infuriating. But it was never anything less than inspired. Even as it resolutely marched up its own ass, the show never failed to find something worth sharing along the way.

That version of Community died two years ago when Harmon was unceremoniously fired for what is generally understood to be “unprofessional” behavior behind the scenes — as if Community had ever been a beacon of decorum in front of them. The season that followed was fascinating the way zombies are fascinating. It was a rare opportunity to watch a chicken flail around with its head cut off for 13 excruciating weeks. So when NBC and Sony shocked the world by bringing Harmon back for an unexpected fifth season, there was every reason to celebrate. It was the sort of resurrection that simply doesn’t happen in TV — or, I should add, with chickens. It gave Community’s creator a chance to put his toys neatly back on the shelf and its fans the opportunity to forget about the “gas leak year” they had just endured. Nobody likes it when their precious memories are tampered with, least of all the types of obsessives drawn to Community in the first place. (This guy knows what I’m talking about.)

It’s important to remember that much of the goodwill surrounding Community emerged from its constant state of distress. Those who loved the show were bound together in a blanket fort of their own making, united against the uncaring cruelty of an industry that neither understood nor cared for them. But Community’s survival was always a factor of economics, not imagination. It stayed on Thursdays for three years because NBC, enduring its version of the Darkest Timeline, didn’t have any other options. And Harmon was brought back not in recognition of his genius but in pursuit of profits. Sony (the studio) wanted more episodes for future syndication dollars and NBC (the network) wanted something that could hold the ratings Maginot line (1.0 in the demo!) it had established as the distinction between acceptable and catastrophic. The fifth season didn’t need to be good. It just needed to exist.

So it was surprising when the first half-dozen episodes soared like a KFC-sponsored rocket. Dan Harmon treated the wreckage left for him by the replacement showrunners as stepping stones, not obstacles. (It helps that, like a vodka-sozzled Bane, Harmon was born in chaos like this, molded by it.) With key cast members vanishing, Harmon reinvented his own wheel in the smartest possible way: adding Jonathan Banks and amping up the presence of Jim Rash, John Oliver, and Ken Jeong. The new status quo rolled for a while: Somewhere between Troy leaving on a lake of lava and Jeff hallucinating himself into a GI Joe cartoon, Community reclaimed its mantle as the most inventive show on network television as well as the one most contemptuous of its rules.

But eventually there was simply too much entropy to overcome. By the time the final two episodes aired — one of which was built around the idea of nothing happening at all — it was hard to avoid the sense that Community was out of gas. The finale, “Basic Sandwich,” wasn’t just lousy, it was exhausted. Sentiment aside, where could this show possibly go from here? Greendale has been saved, Jeff and Britta separated, and a deadly meteor could strike at any time. This feels right. Believe me, I understand the desire to pound on Community’s chest in hopes of a miracle, but sometimes it’s best to give the dead some dignity.

One of the recurring themes of Community was the way reality would press uncomfortably down on Abed’s pop cultural cocoon. No matter how much Community indulged him — and between the Inspector Spacetime convention and the second Dungeons & Dragons episode, the show really indulged him — it ultimately circled back to its often uncomfortable core beliefs: Lousy things happen, no one owes you anything, people who seem perfect for each other very often aren’t, and even if you win the biggest pillow fight in history, a large portion of the world will still look at you like a loser. No amount of secret handshakes or MeowMeowBeenz or trending hashtags can change that. Community was an utterly unique, often joyful show about the inevitability of disappointment. Which, in a way, makes today’s announcement the most Community thing of all.

Yes, Han Solo Will Be a Major Guy in ‘Episode VII’