Community Is Back. And So Is Dan Harmon. (Oh, Yeah, the Show’s Good Again.) 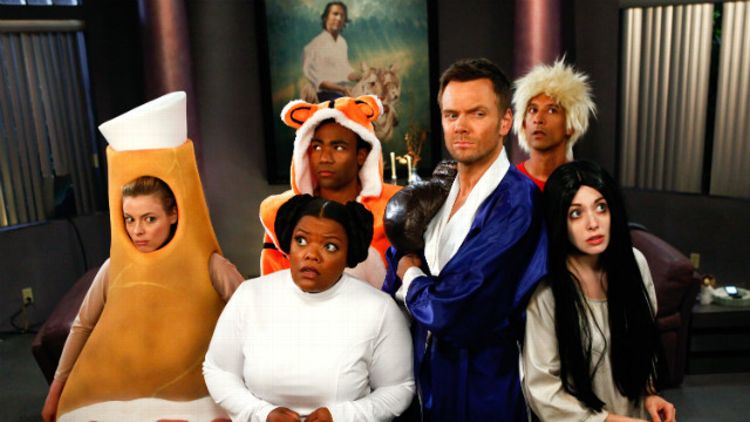 All long-running TV shows break bad eventually. It’s the nature of the beast: Fuel for the relentless story engine inevitably runs dry, complacency sets in, and the familiarity that was once so appealing slowly curdles into contempt. If you kick away the crutch of nostalgia, later seasons are almost never as enjoyable as the first. Even the most innovative shows eventually become the dinosaurs they once sought to replace.

This happened last year with NBC’s Community, a strange and prickly series that perpetually draws more hashtags than viewers. The sudden and drastic dip in quality wasn’t due to old age, however. It was unnatural selection. Creator Dan Harmon, an unexploded paintball of comedy and rage, had been fired at the end of the exceedingly dark third season, replaced at the helm by two amiable caretakers named Moses Port and David Guarascio. Though the fans howled — and believe me, no fan base howls as loudly as Community’s — the thinking behind the move was defensible, if cold: Harmon’s behavior, by his own admission, had become completely untenable; Sony (the studio) wanted to bring the series total as close to the magical syndication number of 100 as possible and NBC (the network) needed consistency in its comedy lineup, even if that consistency was low-rated. The resulting fourth season ticked the latter two boxes but did so with all the wit and personality of a census taker. Stripped of Harmon’s singular ability to frustrate and delight, Community was, quite literally, a shell of its former self. Everything external was exactly the same, from Abed’s metatextual musings to Jeff Winger’s fabulous abs, but there was nothing skittering beneath the surface. All of the clever touches that had worked so well as farce were dragged back as tragedies: the aforementioned paintball, alternate timelines, the limited returns mania of Ken Jeong’s Chang. Community’s fourth season was worse than depressing; it was pointless, a puppet version of itself in more ways than one.

Now, in a retcon too unlikely for even Abed to believe, Harmon is back, apparently unable to resist the chance to wrestle with a mess bigger than anything he could have managed on his own. (As for the corporate thinking behind the reprieve … who can say? The decision-making at the highest levels of media companies, as it is at air-conditioning repair trade schools, is essentially unknowable.) And to say Community has returned with him would be an understatement. The three installments that NBC made available from the 13-episode fifth season (the first two of which air tonight beginning at 8 p.m. ET) shudder and roar back to life like a drowning victim after movie CPR.

I’m not sure if this has ever happened before on television, an auteurist mastermind returning to his creation after a forced sabbatical. But after seeing the energized results I’m now convinced it ought to happen more often. Harmon has always worked best in crisis, and for once he’s confronting one not of his own making. Port and Guarascio had done their best to tie a bow around a show that wriggled and resisted tidiness as if it were a straitjacket. To be honest, I’m not sure if there was much life — or much upside — in a Harmon-led Community that went past the study group’s Greendale graduation. But a chance to muck around in the false hope and mangled good cheer of characters (and a series) that got worse the more they were straightened out? That’s catnip to a disaster-tabby like Harmon, and it shows.

With its creator back in control, Community is once again a sitcom in the same way that bearded guy in True Grit was a grizzly bear; it’s a recognizable skin thrown over something heavy and disturbing. Tonight’s “Repilot,” written by Harmon with fellow Lazarus Chris McKenna, thrusts the gang back together again in a clever manner that’s both familiar (Abed likens it to Season 9 of Scrubs) and cruel (says Jeff of Greendale: “This place ruins lives!”). The jokes are uniformly exceptional but shot through with a rueful ambivalence about the downsides of authority and the narcotizing upsides of conformity. And because this is once again Harmon’s Community, the subtext is the text. A furious Jeff Winger castigates all his friends for the ways they’ve changed since the beginning, how Britta went from anarchist to airhead and Troy from jock to sidekick (Jeff: “Your entire identity has been consumed by your relationship with another man.” Troy: “You found my Clive Owen Tumblr?!?”). Then, after dismissing recent events as a “gas leak” year, he goes in for the kill: “We went into [this] as real people and came out the other end as mixed-up cartoons.” (Says Abed: “Cool.”) This is a tension usually ignored by TV comedies, the best of which often bow at the altar of Cheers (“… and though I walk through the valley of the shadow of death I fear no evil for You, my motley assemblage of mismatched workmates/friends, are with me …”). Harmon isn’t a sitcom atheist, like the bottom-scrapers responsible for, say, Dads. Rather, he’s proudly agnostic. Harmon desperately wants to believe that fundamentally different people can come together to form a family. But he also can’t stop himself from picking at the perfection of that dream like a scab.

Future episodes expand the canvas slightly, introducing the sly Jonathan Banks (Mike from Breaking Bad) as a salty professor named Buzz Hickey (“I have seen human heads used for things other than heads!”) and dealing with the fallout from the offscreen death of Chevy Chase’s Pierce. (That Harmon handles this so deftly and then manages to link it to Donald Glover’s own upcoming departure in a way that feels natural suggests he’s secretly amazing at tying up loose ends when he’s not tripping over his own shoelaces.) But, as always, Community is really about Community itself: It’s a wobbly, probably unsustainable experiment concerning the limits of caring in an indifferent world. The next few weeks are full of Nicolas Cage impressions, surprise cameos, flying spaghetti, and full-scale riots but the stories always return to those same six weirdos crowded around that familiar wooden table. It’s no shock that the characters would be keen to plant themselves back there, year after year, nor that Community’s rabid fans are so eager to tune in to see them do it. What’s both surprising and invigorating is that Harmon, despite his own apparent salvation, will never stop asking if that sort of stasis is a good thing. Let’s enjoy his homecoming while it lasts.