The Winners’ History of Rock and Roll, Part 5: Metallica 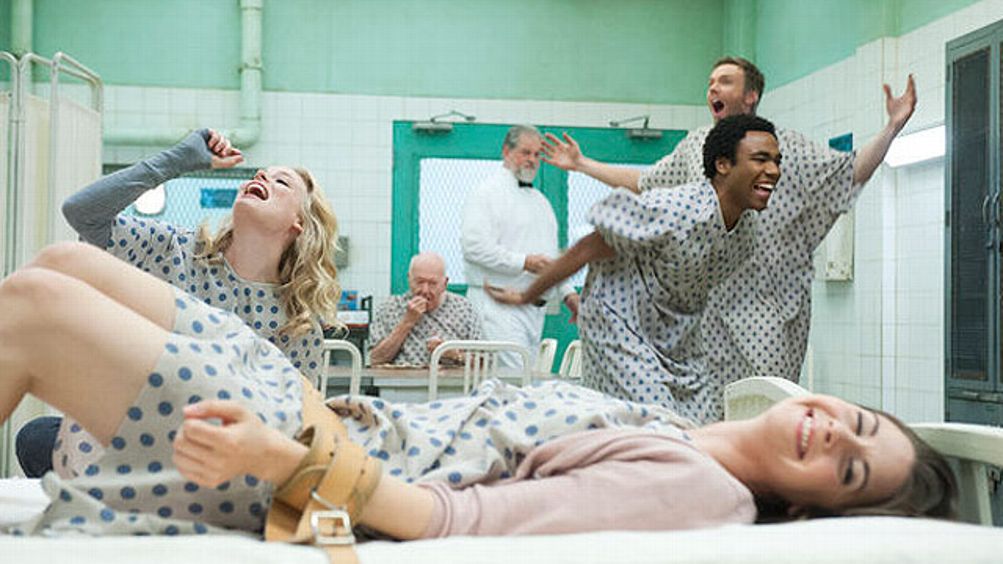 Community is an oddly welcoming name for what has always been a rather exclusionary show. Since debuting in the fall of 2009, NBC’s little comedy that couldn’t (but somehow did anyway) has lived and very nearly died by a creed popularized over a decade ago by urban streetwear companies: For Us By Us. Ostensibly the story of six nominally adult weirdos who form a study group at the country’s least rigorous community college, Community — which, after a nearly nine-month absence, finally returns for an abbreviated fourth season tomorrow at 8 p.m. EST — is really about a very specific sort of outsider’s revenge. For various reasons, Jeff Winger, Britta Perry, Annie Edison, and even Annie’s Boobs have all been rejected by the world at large. So, together, they make their own universe, an insulated, introverted playground where they can be action heroes or video game sprites or even gods.

It’s a familiar escape mechanism for anyone who’s ever been marginalized, and, to Community‘s great credit, it came with teeth. Despite the desperate dreams of NBC marketers, this was never a sitcom about “lovable weirdos.” At its best, Community bubbled with a particularly potent strain of nerd rage, cloaking the unfamiliar spike of adult emotions with metatextual trickery, pop culture references, and an often discomfitingly palpable sense of pain and resentment. Community‘s study group wasn’t a cuddly blanket fort, it was a full-on pillow fight. Safe in the self-made world of Greendale, our heroes didn’t just form a family, they recast themselves as the cool kids, throwing shade at the geekier and more downtrodden, building walls instead of tearing them down. For those on the inside of the joke, this was all hugely rewarding: While Community cratered in the ratings, it burned even brighter in the hopes and dreamatoriums of its frenzied, hashtagging fanatics. By the time it limped off the air last May, its final three (truly excellent!) episodes dumped like rumpled dollar bills in an unmemorable Nelly video, NBC had essentially thrown up its hands. Community had become the television equivalent of a sack of World of Warcraft gold: hugely valuable to a select, dedicated few but not in a way that could ever be transformed into, you know, actual money.

I don’t think Community creator Dan Harmon wanted it to go this way. But, if I’m being honest, I don’t think he didn’t want it, either. Comedy weirdos, frustrated dungeon masters, and Wallace Shawn stans weren’t the only ones seeking refuge in Community‘s clubhouse; Harmon was as well. A complicated perfectionist, prone to day-drinking during interviews and writing self-lacerating screeds on his Tumblr by night, the only thing Harmon seemed to loathe more than himself was the near-impossible task of realizing his vision. And the only thing he seemed to loathe more than that was the possibility of not realizing it.

And so he used his bullied-pulpit to get vengeance on everything that rankled him in real life: convention, authority, the smug hypocrisy of success. Every week, Harmon used his network-allotted 22 minutes as a cracked laboratory to test the limits of generations of established sitcom behavior: Jeff and Britta, his will-they-or-won’t-they couple, were revealed to have been doing it the whole time; a clip show was larded with brand-new manufactured memories; a 21st-birthday party at a bar was as funny as a punch to the liver. Harmon’s approach to shepherding a $45 million enterprise was no different from the one he adopted back when he was making zero-budget YouTube videos called “Laser Fart.” As someone who’d never played well with others (he was fired as co-executive producer of The Sarah Silverman Program before it aired), he was always going to make Community primarily for himself, which is also the only way he knew how to make it good. When NBC grumbled about “accessibility,” Harmon responded with an intricately choreographed song-and-dance number about how the characters were going to be “less crazy” and, as a result, the show was “gonna finally be fine.” They weren’t, and it wasn’t.

Harmon’s tone in his post-parting interviews was bitter. He sounded like a man who had just had all of his most firmly held beliefs about the world affirmed. It was the exhausted smile of the conspiracy theorist at the sight of his first black helicopter.

By all accounts, this was not a healthy way to conduct a business or live a life but, as Evil Abed put it so succinctly in the third-season finale, the word healthy “sounds so much better than boring.” And actually, if you watch it now, the last quarter of the season plays like Harmon writing his own epitaph. (He isn’t credited with writing any of it, of course. Harmon operated like the anti–Matt Weiner: Like Weiner, Harmon was a megalomaniac responsible for every frame of his show, but unlike the Mad Men boss, he almost never put his name on his scripts.) Greendale is co-opted by a fascistic dictator, the Dean replaced with a personality-free doppelgänger. The Study Group is led to believe that they’re the crazy ones — which is actually quite reasonable, considering some of the Claymation looniness in which they’ve indulged. But Evil Abed — that felt-goateed harbinger of doom — again knew what to make of all that: “When the world gets bad enough,” he told his double, “the good go crazy.” The season ended with a quasi-uplifting half-hour in which all of the characters rejected the strange orthodoxies of the greater world — Jeff turns his back on his law career, Troy denies his trade-school destiny — and clung to each other for happiness. When Harmon was fired from his own show just days later, he seemed unsurprised. In fact, he seemed almost relieved.

Of course, NBC’s odd, deeply cynical decision to continue Community without him may have had something to do with that. (The network’s comedy cupboard is unquestionably bare, but the move was more likely about dragging Community closer to a syndication-friendlier number of episodes.) Harmon’s tone in his post-parting interviews was bitter, sure. To me he sounded like a man who had just had all of his most firmly held beliefs about the world affirmed. It was the exhausted smile of the conspiracy theorist at the sight of his first black helicopter. Harmon realized his anxieties were valid, his fears rational. He could fight the good fight against the machine for a while, but he couldn’t win. And that acceptance had to be freeing. Better to have made three seasons of unfiltered strangeness than three — or two, or 11 — highly compromised ones. In the trenches of network television, the only difference between a revolutionary and a collaborator is whether they shoot you in the back or in the front.

I never thought I’d say this, but I’ve come around to Harmon’s way of thinking. Lost in the week-to-week scrum of recaps and instant opinions, I often found Community‘s jagged swerves from sarcasm to sentimentality to be off-putting, its stubborn refusal to conform to any storytelling rules except its own frustrating beyond belief. But with some time away, I’ve reconsidered. Complaining about Dan Harmon’s ability to steer Community is like going to a demolition derby and criticizing the drivers for not staying in their lanes. The extremes aren’t a failing of the show. They are the show. We’ve become more and more familiar with and accepting of TV drama as an auteurist medium — no one would ever think to replace Vince Gilligan on Breaking Bad or the gaggle of goth monkeys banging on typewriters on The Following — but network sitcoms are still considered a lesser art form, the product of shticky groupthink, not unyielding vision. And if Dan Harmon’s outrageously exacting tenure on Community suggested the alternative, his absence confirms it.

It’s not worth blaming new showrunners Moses Port and David Guarascio for the zombie show that staggers back tomorrow night with the first of 13 Harmon-free episodes. The two are, by all accounts, solid professionals, veterans of Mad About You and Happy Endings, and the jokes in “History 101” would be welcome in nearly any sitcom. But Community was never just any sitcom. That’s not meant as a comment on quality — it’s merely a statement of fact. Harmon graphed every plot, tinkered with every gag, and bled every hour in the editing bay. It was this maddening, exhilarating ego alone that elevated Community into something worth getting mad or exhilarated about in the first place. Port and Guarascio could and most likely should run any number of comedies. The problem — even with the continued presence of Harmon-era survivors Andy Bobrow and Megan Ganz — is asking them to run this one. They did their best, but it’s a fool’s errand and I suspect they themselves know it.

In the two new episodes made available to critics, the remarkable cast is as spry as ever, and they do their damnedest to sell the simplified scenarios. But there’s a Stepford quality to it all. Relationships that, in the past, jerked and swerved like Airdancers in front of auto dealerships now lie pliant and obvious: Annie daydreams about being Mrs. Winger, Britta and Troy cuddle much more than they fight. The few recurring gags that Harmon parceled out are now pounded like snare drums; that Jim Rash’s Dean Pelton has been given more to do seems less a nod to his wonderful performance than an acknowledgment that a cross-dressing weirdo in love with a main character is easy comedy; easier, anyway, than wringing laughs out of the Asperger’s loneliness of a deeply troubled savant or the sour racism of an unloved crank. The season premiere comes packed with occasionally clever attempts to blunt this inevitable criticism — there’s a recurring bit that plays nimbly off of Abed’s TV obsession and suggests what Community might have looked like had NBC really gotten its way — but even the meta-commentary, once Community‘s lifeblood, feels listless and cold. “I don’t know why I was so worried about change!” the Dean enthuses and, in the process, gives us plenty of reasons to do just that.

Earlier this week I rewatched “Remedial Chaos Theory,” the third-season episode in which the simple act of going downstairs for a pizza delivery creates multiple overlapping threads of reality. At the time I thought it was the best episode of Community ever made. Now I realize it’s something even grander. Like a painting on a grain of rice, it’s a hilarious and enduring monument to obsession and detail, a testament to disappearing up your own ass and somehow emerging with something worth sharing. It was the high-water mark of Dan Harmon’s singular achievement, though no more representative of his manic commitment than the ugly, off-key war criminal episode that aired just seven months earlier. If Seinfeld was a prickly show about nothing, Community is a defiant show about everything, the highs inextricably linked to the lows. Or rather, it was.

Now it’s a show about playing out the string and meeting corporate quotas. It’s decent ventriloquism; it’s passable karaoke. In its final — and they will be final — episodes, Community isn’t terrible. It’s just terribly pointless. It turns out the darkest timeline isn’t the one in which Pierce is shot or Jeff loses an arm. It’s the one in which nothing bad happens at all.