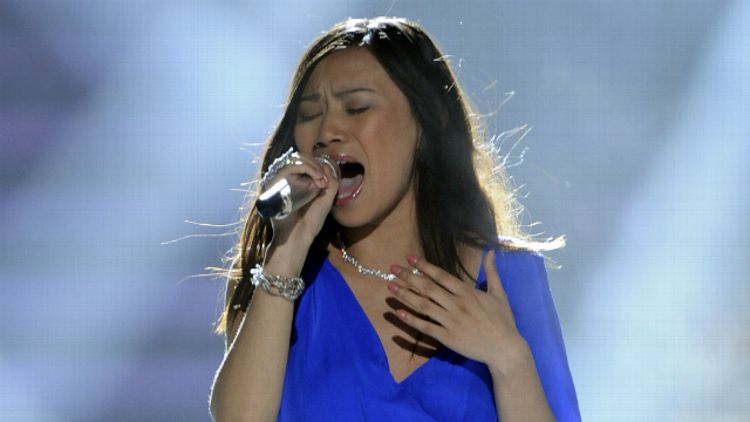 All season, Grantland Idol experts Jay Caspian Kang and Mark Lisanti will answer five very important questions after each performance episode. They can hardly believe the show’s been on for seven straight months, 10 hours per week; it’s really flown by.

OK, we’re finally at the Main Event. Thirteen left. Who was amazing?

Lisanti: I hate to come out of the gate so strong, but we’ve got to cut straight to J-Chez. Yesterday she was Mariah Chezzy. Today she’s Whitney Chezton. Season after season, “I Will Always Love You” is always held up by the panel of inevitably underwhelmed judges as The One You Don’t Dare Sing, the High-Grade Weaponized Whitney you just can’t let the kids fuck around with.

I’m sure that you will instantly follow this assertion with five counterexamples from previous years, but I can’t remember a better Idol version. (If you go to Jennifer Hudson at the Grammys, or bring up that weird Asian guy from YouTube again, this post is over and I’m throwing your MacBook off the ocean liner Chikezie sings on.) She was so good Randy was willing to call her “one of the best singers in this whole competition” (the whole competition!), Steven Tyler forgot to think up a “jail-bait safe” way to proposition her, and J.Lo made a frenzied call to Fox to beg them to pull her Kohl’s commercials from the West Coast rebroadcast so people wouldn’t associate what she does with what just happened onstage. She was so good that front-loading the first real night of competition with half a Whitney tribute didn’t feel exploitative. She was so good I’ve already forgotten how badly Shannon Magrane bombed.

Whew. OK. Now you can do this again with Joshua Ledet.

Kang: Ledet was clearly in rope-a-dope mode last night. Which is smart. If he went full-bore all the time, he’d be like a vending machine that serves Big Macs all day long. You appreciate the deliciousness at first, but after a few days, you can’t really stare at yourself in the mirror anymore. If Ledet’s smart, he’ll mail in next week as well and coast until he finds himself in the Bottom Three. That’s when he breaks out Sam Cooke’s “Bring It on Home to Me.”

I also was impressed by Jessica Sanchez, but she messed up the second most important part of THE BIG SONG. When you sing “BUTUH-BOVE-ALL-THIS,” you need to clearly punctuate each syllable and let that momentum carry you through “I wish you luuuuuuh-huh-uuuuuh-uvvvv,” and then slingshot yourself straight into the BIG NOTE. Jessica Sanchez rushed all that, got a bit ahead of herself, and as such, the BIG NOTE didn’t hit home in the same way.

Skylar Laine finally showed a soft side and didn’t just jump up and down, pump her fist, and tell some dude to get back in his truck and get the hell off her property. She reminds me of the girl at my high school who would get drunk before class, but not in a sad sort of way, more in a “Hey, I’m too cool and mature to be sitting in trigonometry class, so how about I get a bit drunk and tell a bunch of stories about the time I farted in church?” I loved that girl and so will America. Also, fantastic hoop earrings there, Skylar.

Kang: Magrane Train blew out her voice a couple times and didn’t quite get where she needed to go, but she was far better than Jermaine Jones, who sucked all the life out of a great Stevie Wonder song and kind of monster-stomped around the stage with a “THIS SHIT IS SERIOUS” look on his face. When you sing, “Makes me weak and knocks me off of my feet,” you should put a bit of joy in it. Don’t sound like what would happen if Darth Vader found a Groupon for opera singing lessons. He’s quickly been downgraded from “the lisping, marginally talented version of Peabo Bryson” to “the Idol contestant next pegged to play the Cowardly Lion in the silliest production of Wicked ever.”

Lisanti: It’s hard for me to express how disappointed I was in Shannon last night. She wasn’t terrible. She wasn’t. But I think you nailed it: She didn’t quite get where she needed to go. She never nailed the Big Moment. Greatness always felt within reach during her performance, but she never grabbed it. Haters can be all, “She Got Nothing,” but it wasn’t about shitting the musical bed, it was more like having a terrible night of sleep.

Musical sleep? Ugh, “musical bed-shitting metaphor” greatness was within my reach, but I just couldn’t grab it. See how that works?

Three
Mary J. Blige has to be the best guest coach ever, right?

Lisanti: Maybe I don’t pay enough attention to them, but I can’t remember ever being impressed with any of the celebrity guest coaches before; they’ve all just seemed nice and boring and blandly supportive. But Mary J. seemed to vastly improve the contestants’ performances by getting them to fine-tune their phrasing, turn the Hysterical Melisma knob down to a manageable 3, and generally think about and feel what they were singing. And when her tips paid immediate dividends, she clapped and gasped and cheered. Great coaching! She should immediately open a Diva Academy and prepare the next generation of stars for enduring careers like hers. My one question: Why couldn’t she help Shannon Magrane? Did she think she’s too tall to enroll in Professor MJB’s School for Vocally Gifted Youngsters?

Kang: That was the second-best Diva performance of the year, to date. (J-Hud at the Grammys still holds strong at no. 1.) But should we really be surprised? Uplift is Mary’s whole thing. If you stick with her through trials and tribulations, you know everything’s going to be all right. I can’t think of a single person outside of Oprah who is better at making people just feel good about themselves. How many women got over bad breakups by listening to “No More Drama”? How about “Take Me As I Am”? She shouldn’t just open a Diva Academy, she should really just open a Life Academy where she teaches “bloggers” how to become functional human beings with active social lives. How great would that be?

ME: “Mary, I watched six episodes of Storage Wars, tried to lure my cat into the dryer because I remembered a funny Far Side cartoon, and then drove to Del Taco at 11:35 p.m. and ordered nachos and two chicken tacos. To be fair, I only ate half the nachos. The other half is still in my car.”

Have we dangerously underestimated Hollie Cavanagh?

Lisanti: That was pretty mind-blowing, right? It’s as if God drove over to the Voice set, reached down Christina Aguilera’s throat, pulled out the waify, belting 16-year-old version, and deposited that superior being onto the Idol stage. And then made her look exactly like Kristen Bell. There’s a lot going on here; it’s a little tough to process. Like, why is God driving? Because he wants to “seem L.A.”? Would He drive a Prius to further blend in, or go Range Rover and completely subvert our expectations? And why would He allow J-Chez to own the night after he went through all that trouble? Life is a mystery, everyone must stand alone. Wow, I really need to talk to Mary J. right now. I’m losing it.

We’ve got to do predictions, we just have to. Who’s the Bottom Three, and who’s going home?

Lisanti: Bottom Three: Elise Testone, DeAndre Brackensick, and …
… and …
… Shannon Magrane. Guh. I seem to remember someone, no more than 24 hours ago, declaring her your Next! American! Idol! Oh, what innocent, wonderful times! Now, if that exuberant Magrane booster were to have suffered through a really mediocre performance tonight, he might be tempted to walk back that prediction. Or he might DOUBLE DOWN ON SHANNON MAGRANE TO WIN IT ALL.* You know, if she isn’t voted off tomorrow. (She won’t be; Elise Testone is Elise Tes-toast.)

[*A prediction of Idol victory in no way diminishes his support for J-Chez, who’s far more talented, but will never be able to tap into the Aspirational BFF Phenomenon that will power the Magrane Train to victory. If she’s not shitcanned immediately.]

Kang: I can’t believe how quickly you hopped off the Magrane Train. She just needs to listen to me and never, ever sing “I Have Nothing.” Especially when you’re a very tall 16-year-old girl who, by all accounts, has pretty much everything. But there’s no need to get your creepy old-guy nerves out of whack. Magrane Train’s not going to be in the Bottom Three tonight. That’ll be Jermaine Jones and the Golden Girls, Elise Testone and Erika Van Pelt.

Jay Caspian Kang overcompensates for his uncomfortable feelings about Shannon Magrane.
Mark Lisanti is a licensed psychoanalyst, but an amateur theologian.

Sandra Bullock Is Apparently Boning Brett Ratner (Eeew) ... and Other Horror Stories From This Week's Tabloids