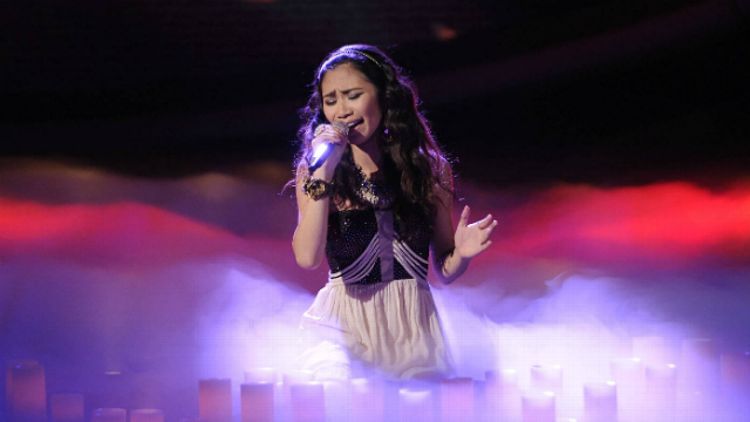 All season long, Grantland Idol experts Mark Lisanti and Jay Caspian Kang will answer five very important questions after each performance episode. They will then sit silently in a dark room for an hour, contemplating the poor life choices that got them to this point.

It’s almost laughable how much better J-Chez and Joshua are than the other three contestants. It’s a sick joke on music, on television, on America. So who was better last night?

Lisanti: I’m a Joshua fan. I am. But as good as he is, we’ve seen that one thing he does exceedingly well over and over again, and there’s no more possibility of surprise. Really, there have been no surprises from him since about the third week. He turns on the blasters, lets it rip, and three minutes later the judges are picking up the table he blew over. We know this. We’re OK with this. But he’s taken his thing as far it can go here.

While Joshua’s neck veins pull taut and his eyeballs strain against their sockets as he unleashes his weekly soul-tornado, J-Chez makes it all look so easy. She ripped up “Proud Mary” without breaking a sweat, she plopped herself down on the stage and “Somewhere Over the Rainbow”-ed Joe Cocker (this is a compliment — I know you hate Kat McPhee, but that was a big moment on this show), she made Little Steven’s nipples tear through that purple blazer. She’s the Greatest Idol Contestant of All Time, and it isn’t close. I know I say it every week, but she’s the only person worth watching, except for maybe the inevitable Phillip Phillips thing that drives me into an insane rage. (More on that later!) I’m fully aware that I’m repeating myself. I’m the Joshua Ledet of American Idol blogging like that. (I would also recoil in disgust if Phillip Phillips tried to put an arm around me.)

Kang: As per our office conversation yesterday, in which I was covertly trying to avoid dripping about a half pound of Skoal Straight juice onto your desk, I don’t know if J-Chez’s talents, which are considerable, really resonate with the audience. Because I am growing increasingly old and cranky, I initially blamed this on “the kids,” specifically the pubescent texting addicts who in three weeks’ time will be crowning Phillip Phillips as the latest in the line of dull, unthreatening white dudes who sound exactly like some other dull, unthreatening white dude who already has a recording contract. But after watching Jessica do Whitney impression after Mariah impression after Celine impression after Tina impression, I’ve grown a bit tired of her weekly karaoke tour. As Ice Cold said in the great film Fear of a Black Hat, you have to “per-form up in this motherfucker.”

Joshua performs. After watching him sing “You Don’t Know What It’s Like,” last night, I realized that he’s been rope-a-doping us for the last five weeks. When I was singing his praises earlier this year, I said that he should go into the tank until he’s really in trouble and then bust out some well-known ballad. Who knew that was going to be a Bee Gees song?

It’s all a bit confusing, honestly. When you hear Joshua sing, you would expect him to be able to murder Sam Cooke and David Ruffin. But he’s done “Change Gonna Come” and “Ain’t Too Proud to Beg,” and underwhelmed both times. His best two performances to date have been a Patty Griffin song and last night’s tribute to Robin Gibb.

Here’s my verdict on Joshua: He’s my favorite contestant in years, but he can’t quite stank out a really stanky song. What he can do is stank out a thoroughly unstanky song. Does that make sense?

Now that you’ve watched that, answer me this question: WHY WOULD YOU EVER HAVE TWO TEENAGERS IMPERSONATE THAT? It’s arguably OK to change up a Tina song and “make it your own,” but it’s quite another to do a note-for-note, spangle-for-spangle, shake-for-shake impression of one of the greatest live performers of all time. My stomach was turning watching Hollie Cavanagh trip and stumble her way through “River Deep Mountain High.” Yes, she might have been doing the Celine version, but doesn’t that kind of make it worse? And although I certainly appreciate Jessica Sanchez, I don’t need to see her trying to shake it like Tina Turner.

Idol, please know your limitations. If you want to do a Tina performance justice, you need (a) a great singer, (b) a great live band, and (c) the sexiest backup singers in the game. Anything less is an insult. To put the performance in the hands of two teenagers, one of whom has no business still being on the show, was, well, disgraceful.

What’s worse, Tina wasn’t the only great act who got defiled last night. I’ve been conducting the Laine Train for the past three weeks, but even I couldn’t stomach watching my favorite stomping machine twang and nasal her way through John Fogerty and Dusty Springfield. And did we really need to drag Joe Cocker into the Jessica Sanchez covers-a-thon?

One last thing about Jessica Sanchez: Someone pointed out to me last night that she seems to be aging in reverse. When we first really saw her onstage with DeAndre Brackensick, she looked like she could be anywhere between the ages of 18 and 25. That range has been shifted back to “anywhere between 10 and 13.” This might be contributing to some of her problems — it’s just weird to watch a girl who looks like she’s 13 strut onstage like Tina Turner.

Lisanti: Let me blow your mind: Yes. Emphatically yes. At this point, he’s just a jam band Sanjaya. He’s abandoned an already razor-thin pretense of artistry in going Full Dave the last couple of weeks. Dave Matthews didn’t exist in the ’60s? Great, he’ll take a Box Tops song and do the DMB version no one asked for. A Righteous Brothers duet? No problem, weren’t their names David and Matthews? I’m not even going to bother looking up what PP2’s instantly forgotten second solo performance was to Rule of Three this one out. Instead, I’m going to have an aneurysm recounting how Randy Jackson said “at least he strives to be original” with a straight face. He actually said that, I died, and I came back from the dead just long enough to type those words, commit seppuku with a tuning fork, and twirl my exposed intestines around like a fleshy lasso while I bleed out. Oh, hey, died again. Your turn.

Kang: Let’s not forget Jasmine Trias, who finished third. Nor should we forget Diana DeGarmo, who made it all the way to the finale. But even though I didn’t think those two should have made it as far as they did, I don’t remember hating them. Suffice it to say, I feel differently about Phillip Phillips. I really, really hate him. And not because he sucks, which he does, but more because I think he honestly believes that he’s doing something very interesting up there onstage. I don’t buy the Sanjaya comparison — that phenomenon was more about hair and giggles. This one is about a bunch of tweens who control the future of the world and their collective belief that Phillip Phillips will be their Jordan Catalano.

Could Steve Van Zandt have given less of a flying fuck about being a coach, and was that not totally refreshing, once you get beyond the total confusion about why he would even bother with this show?

Kang: Who is that? I don’t speak your language: “Tri-State Bro Over the Age of 35 Who Doesn’t Know the Second Verse to ‘Doo-Rags.’” If you’re asking if I thought that Silvio from The Sopranos was a good coach, I’ll say yes, but I was confused as to (a) how he came back from the dead wearing a weird wrap around his head, (b) how he had managed to gain 80 pounds while in the grave, and (c) why he now sounded like Joe Piscopo after 200 whippets.

Lisanti: What’s “‘Doo-Rags”? Please supply a valid AltaVista search link with your presumably insulting cryptostank references. I’m not a Springsteen fan, so I’m not going to be offended by any of that, but you should probably be showing a little more reverence for Silvio Dante. Don’t be surprised if you roll over in bed tomorrow morning and find Big Pussy’s severed ass on the pillow next to you. BTW, we fed him a three-pound muffuletta a few hours before we broke out the cleavers — things are about to get messy for you.

In any case, his coaching was about as enjoyable overall as Mary J. Blige’s, even though they came at the gig from opposite directions. Hers was “I am going to improve you 400 percent with three simple changes to your performance,” while LSVZ was more from the “I could give a shit, you sing good, get out there and do your thing” school. That’s where we’re at this deep in the season; he was the perfect choice.

Lisanti: This is a playing-the-odds guess, but the Bottom Three will be Joshua, Hollie, and Skylar, with Hollie going home. She actually had a pretty good night, but we’re running out of virgins to throw into the karaoke volcano. She seems like she’d go without a fight.

Kang: Please send Hollie home. I can’t take any more. I’ll murder Jedward, thereby ending the dominion of British demon children on singing-competition TV if that’s what it takes to get rid of Hollie.

Jay Caspian Kang used the advance from his novel to buy Tina Turner’s Thunderdome costume, which he’s wearing right now. He looks, in a word, “fierce.”
Mark Lisanti plans to see a therapist to work through his Phillip Phillips issues.

Jody Hill Is Rebooting Dukes of Hazzard. Maybe. Well, Wait Till He Finishes Writing It and Then Ask