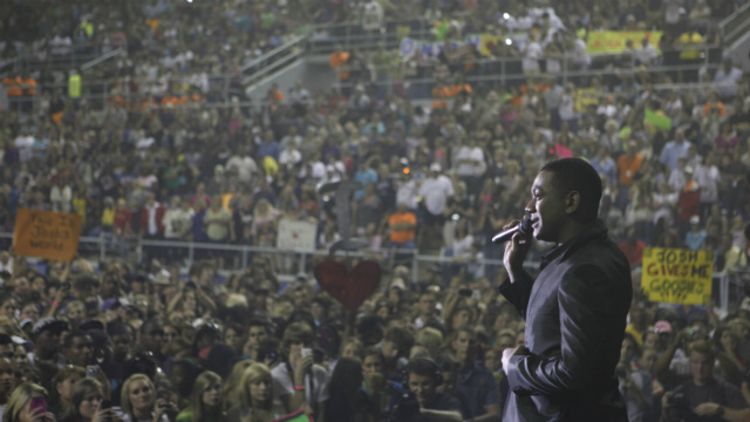 All season long, Grantland Idol experts Mark Lisanti and Jay Caspian Kang will answer five very important questions after each performance episode. Soon they shall toss a ring into a magic volcano and their journey will be complete.

What did you think of last night’s “One for the judges, one for themselves, and one for Jimmy” format, mixed in with the hometown concerts? Did it momentarily breathe life into the show, or was it just a different kind of two-hour trudge through the karaoke killing fields?

Lisanti: Do I dare say I enjoyed it overall? If you’re going to make us sit through two hours of this thing — and they’ve never taken the two-hour boot off our throats all season — it was nice to get three actual performances in there. Even the hometown concerts seemed to have a little more energy than those of recent years. Maybe that had something to do with the high quality of two of the three finalists, or maybe Chula Vista doesn’t usually see that much action, or maybe the Idol producers gave every kid in attendance a Four Loko the size of an oil barrel on the way into the arena while whispering, “Phillip just broke up with his girlfriend and he says he likes you the most” in their ears.

And the best thing about the format was giving J-Chez the ability to power-pander to Steven Tyler, after a full season of fearlessly attempting to slay every “don’t ever sing that” song:

Kang: I’m going with karaoke killing fields. Everyone got exposed last night. My opinion of everyone on the show — save Seacrest — took a sharp dive. When it came time for Jessica to turn her bag of tricks upside down and dump it all at the feet of Steven Tyler, she just kind of screeched and moaned her way through that awful song from Armageddon. Joshua just kind of floundered around in his world of maximum velocity and spangled leather. (I have no words for Phillip Phillips.) Nobody had a “moment,” nobody separated themselves from the pack, and because Diva Voltron couldn’t assemble her powers well enough to bang out an iconic performance, it really seems like we’re heading toward a Phillip Phillips–Joshua Ledet finale.

Last night Joshua Ledet sang Etta James and Mary J. Blige songs. Was this the Night of a Thousand Stank-Boners in the Kang household? Or was it more like a Kangsmas where you got everything you asked for, but after the wrapping paper was off the gifts, you quickly lost interest and wondered if you’d be happier if Santa had gone off-list? (This question is mostly for Kang.)

Kang: Nooooooo. I’m firmly back to my old position: Joshua Ledet can’t stank out a stanky song, but he can stank out a thoroughly unstanky song. He’s like a Neville brother. In fact, from here on to the end of the show, I’m going to just call him Joshua Neville. If you put him next to Linda Ronstadt and have him sing “Don’t Know Much,” he’s going to convince a bunch of white people that what he’s doing is soul music, but if you have him take on Etta, the result is going to always be underwhelming. The problem, really, is that Joshua Ledet does not sing. He makes melodic noises, sure, and he makes some of the most ear-splittingly awesome noises we’ve ever seen on the Idol stage. But none of those sounds ever really cohere into anything resembling an actual performance. If you’re going to take on “I’d Rather Go Blind,” you have to meter out and attack every note. You can’t do what Joshua does, which is just kind of skip around and wait for the big moment, so he can go ROAAWWWWR! YEAYEYAYEAYEAH! WHOAWHOAWHOAAAAAAAA! and forget that there’s a song going on.

Joshua, you did a perfectly fine impression of Mary J. Blige last night, and if you were wearing a wig and a white leather jumpsuit, I might have even paid money to go see your show. But it wasn’t anything other than a drag queen-y impression of Mary J. Blige. If you make it to the finale, here’s some advice: Do what Mary has done in recent years and take the whitest song imaginable and work it out in your own style. Might I suggest “Drops of Jupiter” or that Collective Soul song about heaven?

Lisanti: You could’ve just said, “He didn’t give me a stank-boner” instead of hurting the man-child. He’s very sensitive church folk; you have to put on the kid gloves before you bitch-slap him.

After Phillip Phillip the Phillips’s performance of Madcon’s version of “Beggin,'” Steven Tyler said that he “could be the new Springsteen.” I … but … hmmm … what … [seizure] … [second, more violent seizure] … [dies].

Lisanti: Honestly, that didn’t even bother me. I was too busy rampaging around my neighborhood, slashing wildly with a butter knife at people walking their dogs, muttering random lyrics from “Glory Days.” And I’m not even that big a Springsteen fan. My only explanation is that (a) Tyler was just mega-trolling Phillip, whom he quite obviously hates (every time he sings, ST follows with a hilariously underminey “You always take the melody and throw it out, you don’t need it, you’re just making it yours!” comment) or, (b) tonight all creatures big and small shall bathe together in Baal’s bloody hellstorm, as the darkened skies vomit forth the accurs’d entrails of a billion eviscerated cherubim. Pick one. I’m partial to the latter. It’ll save us from watching him in the finals next week.

Kang: Latter, too. But that’s because I’m still trying to figure out whether or not I’m going to buy Diablo III. If I do, you can sub in Fake Jay Kang for the rest of these recaps because I’ll be gone to the world.

There are reports that J.Lo might be leaving Idol after this season. Assuming this isn’t just a public negotiating tactic to ensure she gets more money than Britney on X Factor, is that a huge blow, or does it not matter at all?

Kang: Depends who they replace her with. We’re rapidly running out of train-wrecky, hot singers with cross-generational name recognition. Say they replace her with Lady Gaga. Would that really translate to Idol’s increasingly aging viewing demographic? If they brought in Shania Twain, would any tween really care? It’s a tough spot to be in, especially with Britney having gone off to the X Factor. It didn’t matter in the days of Simon, but J.Lo is the eye candy, the biggest star on the judging podium, AND the best judge. You can’t replace that. I say they offer her $20 million a year to stay.

Lisanti: I suspect that’s how it’s going to play out. First, we get the stories about how she’s “too busy” (ironic considering how Idol unexpectedly saved her career, which was so deep in the shitter that Marc Anthony — whom she swiftly kicked to the curb after things started going her way again — felt like the star of the marriage) to fit in another season. Then we start to hear about how they’re willing to “work around her schedule” to keep her. And then that magic $20 million number will materialize, which tells the world “She is the franchise now.” And then she comes back, because really, what’s she going to do? Another awful album? Poop out a rom-com with Bill the Tiny Vampire from True Blood? That stuff plays much better alongside the Idol gig than it does on its own.

I’d miss her if she left. She’s the best judge by far and so very, very shiny. Shiny shiny. But if she must go chase her dreams, well, just clean house and let the Suge Knight Era begin!

Who’s in the finals?

Lisanti: It feels like we’re in for another Adam Lambert vs. Kris Allen, Scary Talent vs. Nonthreatening Boyfriend Showdown between Joshua and Phillip. Is there any way we get the J-Chez vs. Josh mega-finish we’ve been not-so-secretly praying for? No. No, there is not. We all know how this plays out. I hope Phillip is ready for that record contract he loses after a year of fighting over whether his debut double-album of DMB covers can be called Brave Matthews.

Kang: Joshua and Phillip. Not a question. Brave Matthews sucks.