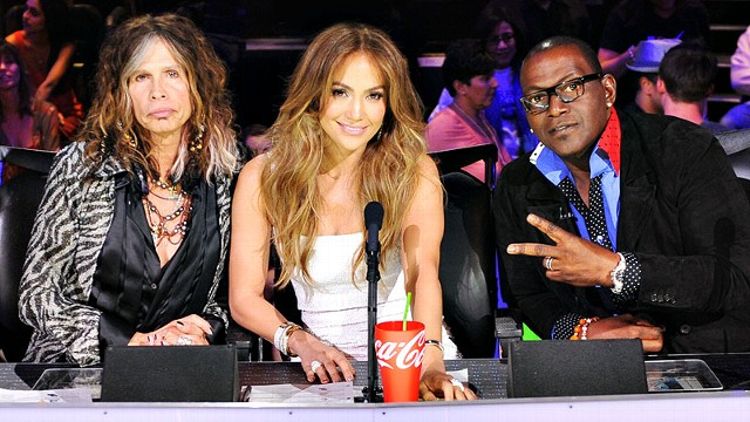 This is usually the spot where we ask about your favorite performer, but tonight any answer to that question that isn’t “Deandre Brackensick” or “Joshua Ledet” would be completely insane. So: Deandre or Joshua? (Note: If you pick Ledet, you have to attempt to top his “Mantasia” nickname.)

Lisanti: Since I know Kang’s already got a custom-made Fathead decal of Joshua Ledet belting an Aretha song static-clinging to the ceiling above his bed, I’m going to be the gracious one and take Deandre Brackensick. Not only is he physically mesmerizing because of his uncanny, unsettling resemblance to whatever the DNA-cocktail child of Jason Castro, Rob Pilatus, and Taylor Dayne inevitably would look like, he’s got the most interesting voice in the Top 24. Why? DYNAMICS. That’s right. Dynamics. One moment he’s all up here [waves hand three feet above head], the next he’s bouncing around in the “chest notes” (thanks, Randy Jackson, for saying something like that), and then he’s waayyyy down here [brings hand to the groin area to frame it with a dramatic flourish]. He’s falsetto and whatever the technical term for the opposite of falsetto is. (Bassitone, right?) He’s all those things, with the up and the down. So much upsy-downsy, but with a lion’s mane throw on top of it.

Granted, he really has no idea how to perform yet, but he’s not afraid up there. Performance will come. And no, he’s not as good as Ledet, who sings like a dozen angry Motown ghosts are trying to fly up his urethra and drive his diaphragm with otherworldly power 10 seconds into any song. But Josh’s hair is not that great. It’s a push.

Kang: Mantasia works on five or six different levels and so it’s pretty difficult to top. First, Joshua Ledet, like Fantasia before him, stands so far ahead of the competition that the finale (barring insanity and/or the “sensitivity” that put Fantasia, La Toya London, and Jennifer Hudson in the bottom three during Elton John Week) already seems predetermined. Second, like Fantasia, Mantasia’s a 19-year-old who sings way beyond his years, and, if I can get a bit music “journalist” here, “infuses his rasp with a Bayou yearning that plumbs a straight line back to Leadbelly.” Blergh. Third, he has stolen Fantasia’s “Yeah yeah yeahhhh,” which she featured both in her iconic performance of “Summertime” and at that Awards Show where she made Elton John cry.

More similarities? He might be another in a long line of church singing prodigies, but like Fantasia, you don’t just want to root for him to win Idol, you want him to have a career that will last for years. Most importantly, the young man Joshua Ledet, a.k.a. Mantasia a.k.a., The Rugged Child, takes you on a motherfucking Emotional Journey. I can’t tell you anything anyone sang last night because after Joshua Ledet sang, I was flying over my emotions like Princess Jasmine on that carpet with Aladdin and that monkey.

Fantasia was my favorite Idol contestant of all time. I’ve been waiting for someone who could challenge her throne. Ledet hasn’t reached the palace gate yet, but he’s coming. And he’s revitalized this season. Let’s just hope this isn’t a first-week premature ejaculation, a la LaKisha Jones waaaay back when.

Has any once-promising contestant you can remember ever turned in a worse performance than Eben Franckewitz’s unconscionable slaughter of that Adele song?

Kang: John Stevens singing “Crocodile Rock.” Maybe Camile Velasco murdering “Goodbye Yellow Brick Road.” But at least those two were trying and hadn’t just supplanted David Leathers AND Jairon Jackson for a spot in the Final 24. I hope everyone in America noticed that Eben Franckewitz was wearing a T-shirt with “SWAG” written across the front. If we take the Silver Jews at their word and agree that punk rock died when the first kid said, “Punk’s not dead, punk’s not dead,” what the hell does it say about the whole Odd Future movement when Eben Franckewitz, floppy-haired castrato, reps Swag?

By the way, thank god Odd Future’s over.

Lisanti: I seem to remember Megan Joy’s “Rockin’ Robin” as an instant career killer, but (a) that was more a failure of song choice than vocal ability, (b) she had the benefit of being loony, tattooed, and hot, and (c) she did some insane “caw, caw!” thing at the end, which was batshit and endearing in equal measure. I miss Megan Joy. You keep going with this for a minute, I’m going to spend some quality time wandering around her YouTube archive.

Oh, in the meantime, here’s Franckewitz being so terrible that Adele’s going to write a song about how he wronged her:

Lisanti: I’m done with Adam Brock. The sentimental hanky, the Terrible Towel, the “white chocolate” nonsense, the “a large black woman is trapped in my body” awfulness is just too much to bear. His voice is merely “above-average karaoke DJ who sets himself up with a showcase song at the top of every hour” level, and that can’t carry that aforementioned insufferable bag of tricks.

Kang: I fast-forwarded through every judging moment. I did notice, however, that Randy was wearing a collared shirt that seemed to have two distinct tie patterns stapled onto either side of the massive, Bernoulli’s principle-inducing collar and another tie pattern stapled down the front of his “shirt.”

Lisanti: At this point, the most utility Randy can bring is if he keeps riffing on this “fashionable Dracula” motif in future episodes, allowing us to nickname him The Count and crack ourselves up in the office by reciting increasingly large imaginary percentages in a Transylvanian accent. “Eleventy billion percent, twelvety million billion percent, dawg, BWAAA AAA AHH AHHH.” See? Already hilarious. Meanwhile, J.Lo has been nothing but radiantly positive and Steven Tyler has been nothing but the world’s most supportive “cool aunt.” How is America supposed to know it’s time to get rid of Eben and Adam Brock?

The voting rounds are finally upon us! After this week, we’re going from 24 to 13 contestants, composed of five boys, five girls, and three judges’ wild cards. So: Which five boys are through on votes, and which one (or two) grab(s) a wild card?

Lisanti: Joshua Ledet, Deandre Brackensick, Heejun Han, Jeremy “Jer Bear” Rosado, and Eben Franckewitz. Wild card: Chase “Country Edward Cullen” Likens and Phillip Phillips Jr. (Who, I should mention, mixed it up *just enough* last night that I didn’t fly into an uncontrollable, spittle-flecked rage about the DMB stuff. I’m making progress as a human. We both are.) I could be wrong about where a couple of them slot in with votes vs. wild card, but these seven are going through. Yes, Eben’s staying — the tweens will give him another shot. It’s too early in the competition to eject their nonthreatening BiebFF for the relatively minor crime of not being able to sing.

Kang: You know, I completely agree with your list. I can’t even manufacture something “polarizing” to “move the needle.”

I’ll say this: I hated Creighton Fraker as much as the next rational person with ears, but he’d make a wonderful drag queen. He could start off as Miss D’Opportunities and give one of those long, funny monologues about the time he was on Idol and dish all sorts of dirt about Seacrest, J.Lo, Randy, etc. And then, as the lights went down, he could sing three or four Celine Dion songs. After a short break during which everyone in the audience just gets drunker, Miss D’Opportunities gets back up onstage and does the whole soundtrack to Hedwig and the Angry Inch. Who doesn’t watch that?

Jay Kang is wondering what happened to “Seacrest out!”
Mark Lisanti’s not gonna lie, he kind of liked Randy’s shirt.

How Much Should Host Lindsay Lohan Address Herself on Saturday Night Live?