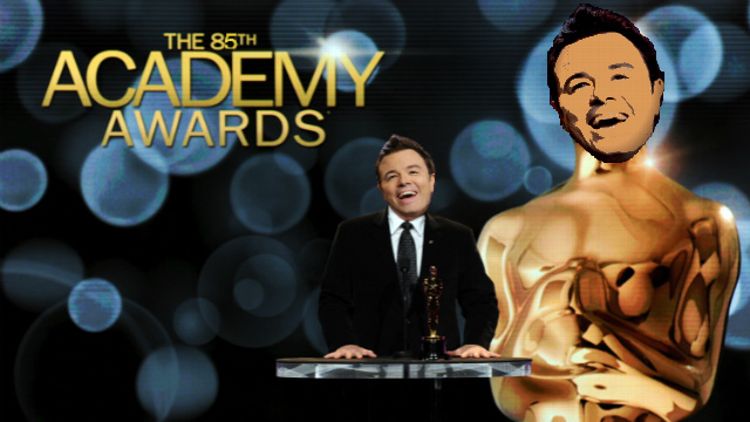 OK, now take a deep breath. In. Hold it. Hold it. Aaaand out.

Here’s why MacFarlane’s hiring isn’t all that confusing:

There’s also this: Last year, the Oscars were all set to embrace a populist, divisive figure. Then Brett Ratner pulled some next-level self-sabotage and had to resign as producer; quickly, his buddy and then-host Eddie Murphy dropped out too. Dazed and humbled and running out of time, the Oscars went crawling back to comically safe environs — they hired Billy fucking Crystal. Now it appears the powers-that-be are ready to try the divisive/populist thing one more time.

Not that any of that is going to convince you — you, you culturally well-rounded urbanite — that hiring MacFarlane was a good idea. OK, look — a few months back I wrote a post about how I liked Ted, and accidentally became Grantland’s Chief Seth MacFarlane Defender. [Editor’s note: Someone had to do it. Thanks, btw.] Now, I know, rationally, that hiring an endlessly hammy writer and TV voice actor to host the biggest night in movies is a crazy play. It’s a play that is partially treacherous, and it’s a play that is almost certainly doomed. Almost. See, I don’t take my (made-up-just-now) position as Grantland’s CSMD lightly. I, for one, believe there is hope. I believe there is always hope. So let’s see if we can’t just talk ourselves into this, OK?

1. The very reason you hate him might make him a good host.

Family Guy is a loosely stitched-together collection of quips and references, right? Hey, that’s what an awards show is, too! Watching his shows can feel like a bombardment, zinger after zinger. Taking a road trip with him, with all his antic energy and constant riffing, sounds nightmarish. But this is MacFarlane hopping up and down between awards for Best Sound Editing and Best Sound Mixing and Best Layering of Sound in a Highly Noisy Sound Situation. Isn’t MacFarlane the kind of talent that’s perfect for keeping things non-drowsy? Don’t we want to be yelled at during the Oscars, just a bit?

2. He hosted Saturday Night Live without dropping the ball.

It’s only fair to look at MacFarlane’s (well-rated, by the way) SNL hosting gig as a trial run. As our own Tess Lynch said, “MacFarlane was mostly smooth and unruffled, and did a pretty good job as the first host of a show that’s seen a few notable departures between last season and this one.” OK, and also: “And now I will crawl into my underground shelter, where the grenades you cast at me for saying so will bounce off the steel surface and land in my neighbor’s yard. And they have young children. So think twice, assholes.”

But, hey, this was one totally justified reluctantly positive appraisal! Watch this. It’s funny.

This, also, is funny.

After serving us all a glass of warm milk before putting us to bed last year, isn’t it admirable the Oscars wanted to get a little ballsier?

Probably, MacFarlane will at least say one wildly offensive thing: jokes about NAMBLA and celebrity deaths and embassy bombings are all in his wheelhouse. Hopefully, that wildly offensive thing will be funny. Either way, we won’t forget it five minutes after the broadcast ends. Ricky Gervais may have been irritatingly smug during his Golden Globe take-down routines, but at least he landed some solid head shots.

When Eddie Murphy got the Oscars gig, no one thought that was an unassailably great idea. But we at least were curious to see what would happen. Then Billy Crystal came aboard and all possible mystery was sucked right out of the proceedings. With MacFarlane, again, we’re dealing with the unknown. The dark, mysterious, ultra-sexy unknown.

4. This guy loves old-timey stuff and there is nothing old-timier than the Oscars.

Anything that involves wearing a tux and drinking a martini — that’s his thing. He is deeply devoted to the classic American songbook. In his spare time, he records albums that get nominated for “Best Traditional Pop Vocal Album” at the Grammys. He can, at the drop of a hat, provide you with a selection of deep cuts from the MGM musical library. He is an anachronistic wonder: a currently relevant pop-culture figure with a young audience who we also assume truly, deeply cares about the history of the Oscars. From that perspective, isn’t he almost a no-brainer for this kind of gig?

During Family Guy’s seventh season, a young woman began showing up at the office. Without explanation, she would wheel a large piece of equipment into a lavatory just off the writers’ room and wait there for MacFarlane, who would excuse himself and disappear into the bathroom. Several former staff members told me that although everyone could hear the whooshing sound of a spray-tan machine, no one dared make a joke about it when MacFarlane emerged, bronzed and burnished.

He has his own tanning machine! Think of all the money the AMPAS will save getting MacFarlane to provide for his own Oscar-night tanning.