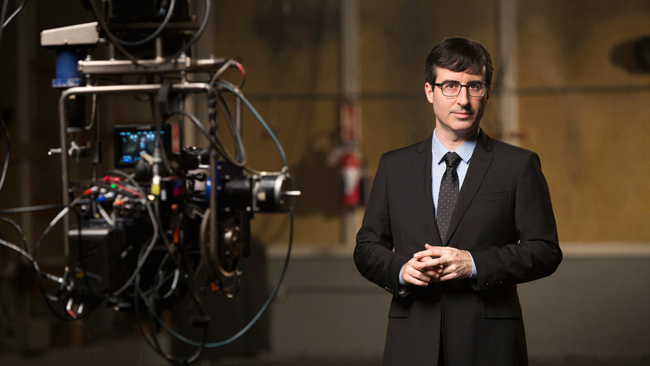 “Welcome to … whatever this is,” John Oliver said last night, kicking off the very first episode of his new HBO show, Last Week Tonight. And it was spot-on. Before Oliver’s fill-in stint at the Daily Show anchor desk had even wrapped up, there was a general assumption that #NothingWasTheSame: Somehow, some way, JohnO’s share of the pop-culture pie would expand. It was a rapid ascent, especially for a guy whose goofy charms had previously taken only him as far out of the Daily Show orbit as a recurring Community gig. But he was ready when called, and he put up the numbers. Because he believed in himself! Just like Troy Daniels!

Some guessed an expanded Daily Show role, maybe even a semiofficial assignation as show’s next-in-command, was in his future. That he would instead get his own program, and on HBO, seemed to make more sense: As good as Oliver was, Jon Stewart is that show, and there’s no perceivable workaround for that. And then we heard that Last Week Tonight was getting Daily Show headwriter Tim Carvell as showrunner. And then we saw the cheekily self-deprecating promos. (“Just like the nightly news. Only weeklier.”) And then we realized it was both quite promising, and only right, that John Oliver would get a full, proper shot at — well, at “whatever this is.”

So, at least after one night, what is it?

It is, to no one’s great surprise, a lot like The Daily Show. The fact that it’s weekly is certainly a big, fundamental difference. And this being fancy pay cable, of course, there are no commercial breaks. Instead, Oliver cut away twice, at roughly 14 and 21 minutes past, to interstitial sequences. (The first time it was John McCain telling the same joke six times in six different places; the second time it was a bit about the NFL’s mistreatment of its cheerleaders.) There was also a fake ad with Lisa Loeb, in which she showed up to quirkily bash twee ol’ Oregon, and an interview with ex-NSA boss Keith Alexander. But for the most part it was Oliver at a desk, rattling through news stories, with nothing but his wit, a pile of papers, and some beautifully lo-fi Photoshop pieces. And so the big question is, “Why should this exist if we already have The Daily Show?” And the answer, at least from last night, is “Why not have both!”

Getting granular, there was one more difference: Stewart uses expletives masterfully, seemingly always knowing when a solid “bleep” is needed; Oliver, however, can just go ahead and say “fuck.” And that he did. Oregon got the brunt of it, with Oliver explaining both “Your mountains are breathtaking, your coffee is fair trade and everywhere you go you hear the sound of fucking ukeleles” and “We flew in Lisa Loeb to tell you to go fuck yourself.”

And then the biggest, most important, most obvious difference: One Jo(h)n is not like another. Stewart has been doing his thing so well for so long that we forget how easy he makes a hard job look. His default setting is a kind of incredulous, kindly, winking exasperation. Oliver isn’t quite as seamless, and thankfully so: He seems to be taking more of a peppy attack-dog form, eager to chomp down on some of his targets rather than give them the rope to hang themselves. In his interview with Keith Alexander, in particular, he deviated from TDS form by avoiding a conceit, and actually trying to get the dude to answer the tough questions. He also suggested the NSA change its name to Mr. Tiggles, though, so, wins all around.

Really, all hangups on what this show is so far are secondary — not just because it’s been only one night, but also because it was pretty goddamn hilarious.

“Two at once,” Oliver cracked about the sainting action in Rome for Popes John Paul II and John XXIII. “That’s the papal sainthood equivalent of a KFC Double Down.” Then later, after taking the U.S. media to task for ignoring the election in India, he introduced us to the major candidates: Rahul Gandhi and Narendra Modi, who’s actually been campaigning via hologram. “Modi has gone Tupac at Coachella,” Oliver excitedly squealed. “And that is how you convince undecided voters — ‘[Modi] appeared to me in a hologram and told me he’d give me a toilet!’ That’s not just how you get elected — that’s how religions get started!”

And my favorite moment, which came after the showing of a Pop-Tarts ad purporting the product was actually good for children. “Fuck you,” he simply spurted, quite effectively, before going on to insist, with just the perfect illustrative hand gestures, that, no, Pop-Tarts won’t make your children healthy and happy, but will just cause them to “run around punching people in the dick before collapsing into a puddle of tears.” Bravo, sir. Bravo.

“Welcome to … whatever this is,” Oliver had said, promising a show still working on its evolution. Yes, the foundation is built on The Daily Show, but that doesn’t mean the time and the reps won’t take it somewhere else eventually. We’re setting out on a journey here, people. A hologram-filled, “fuck”-riddled, dick-punchy journey. Won’t you join?