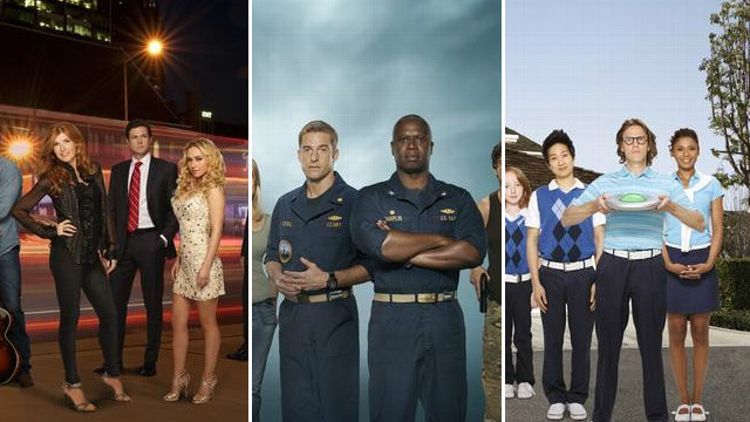 With Labor Day in the rearview mirror, it’s time to focus on the main business of the fall: school football television! All week, Grantland will be previewing the new TV season, one network at a time, and evaluating the first efforts of each incoming freshman. Next up: ABC.

Oh, ABC. Always the bridesmaid, never the bride. (Or, more accurately, always The Bachelorette.) Over the past few decades, the Alphabet has had good years and bad years, but has rarely risen to the dominant, zeitgeist-defining heights of NBC in the ’80s and ’90s. Then again, neither has it sunk to the squelchy bottom of, say, NBC not in the ’80s and ’90s. ABC — which, it must be noted, shares a corporate parent with Grantland (Disney) — often seems generally content, as the cliché goes, to stay in its lane: mixing broad, family-based comedies with a pert and glossy selection of what I prefer to call body washes. You know: like soaps, but classier. So it’s been a steady diet of sarcastic moms rolling their eyes at kids in the 8 p.m. hour and sexy doctors saving them at 10 p.m. It may not always be a world-beating strategy, but it’s a dependable one.

Still, there was one year that was different: 2004, ABC’s annus mirabilis. Coming out of a last-place stink-bomb, then-president Steve McPherson rolled the dice with two ballsy, boundary-breaking hours. Desperate Housewives and Lost weren’t just popular coming out of the chute, they were legit sensations, changing both the perception of the network and, in lasting ways, changing what audiences expected out of their serialized hours (bitchiness and polar bears, respectively). By the time November sweeps roll around, network heads would give up their executive washrooms for the emergence of a single potential tentpole. In 2004, ABC had two.

(Of course it wasn’t all roses and Rose and Bernard for McPherson that year. No one’s talking much about Kingdom Hospital or Life As We Know It. But in broadcast programming, just like a slots player in Vegas or a paparazzo driving near Amanda Bynes, you only have to hit once to be a millionaire. If Mario Mendoza had gone into television instead of baseball, he’d be a Hall of Famer.)

Why do I bring up the events of eight years ago — events that occurred six years before current ABC head Paul Lee was even promoted to his post? (McPherson stepped down in 2010 after a few too many duds like Eastwick and The Forgotten and one allegation of sexual harassment, which is, of course, one too many. He now makes wine.) Because even in 2012, the ghost of 2004 lingers for ABC. In May, Desperate Housewives went off the air, the last of the ’04 kids to bow out. (It turns out Wisteria Lane was purgatory the whole time!) All recent attempts to clone the success of those glory days, from secondhand smoke monsters like V and FlashForward, to sudsy slap-fests GCB and Marc Cherry’s sentenced-to-Lifetime Devious Maids, have fizzled. Despite a healthy crop of returning shows, ABC still finished last season in a very 2003-ish place: the basement. (Though, it’s worth noting, not in total viewers — just the hypervalued 18-49 demographic.) If Paul Lee hopes to challenge the polarized dominance of CBS (the olds) and Fox (the youngs), he’ll have to do it like a hungry vampire: on the strength of fresh blood.

But it’s not like the cupboard is completely bare. While the Shonda Rhimes Industrial Complex (Grey’s, Private Practice, Scandal) is running on fumes, Lee gained modest but extremely brand-friendly returns last year from Revenge and Once Upon a Time. And before hightailing it to Napa, McPherson handed Lee the keys to a Ferrari kitted out like a clown car. No network, not NBC or even surging Fox, has a comedy block like ABC’s Wednesday night, where Modern Family dominates, Suburgatory satisfies, and The Middle … well, The Middle is just fine. Unfortunately, the best sitcom on its air, Happy Endings, has been exiled to Tuesdays, where it will tussle with (and most likely be trampled by) its ideological ally New Girl. Look, I get why this had to happen: Phenomena like Modern Family can’t just excel in a vacuum, they have to be used to jump-start future hits as well. But in his two years at the top, Lee has proven his flair for the dramatic while being deeply suspect in the laughs department. The same man who tried to sell us on the cross-dressing disasterpiece Work It is also unnaturally high on The Neighbors, a lowbrow high-concept comedy about aliens, sitting pretty in the post-Modern time slot. It’s broadly bad in a way that would have better luck with audiences either a long, long time ago (1982) or in a galaxy far, far away (Melmac).

Still, even if no one’s laughing, Lee and ABC could still be heading to the bank this fall. For the first time since 2004, the Alphabet has what are without question the two finest new dramas of the season: the wonderfully familiar — yet still fresh — Nashville and the risky, adrenalized Last Resort. The shows are being debuted into a radically diminished marketplace, of course, with networks pulling in a much lower audience share and, along with it, much lower expectations. Still, it’s refreshing to see a network president taking a cue from Marcus Chaplin, the rogue hero of Last Resort, and bravely trying something bold in an attempt to get out of the bomb business.

As broadcast ratings fall and acclaim for cable rises, it’s very easy to forget just what the traditional Big Four networks excel at in the first place. It’s not just the casual viewer who does this, either — I know a guy who only last week wrote a starry-eyed encomium to big-picture thinking that envisioned ABC as little more than a content farm for future superhero movies. (What a dope!) And then comes a show like Nashville, an almost defiantly old-fashioned hour about family, politics, and music that sounds dull on the page, but is absolutely delightful in execution. Written by Thelma & Louise scribe Callie Khouri, the show — about the collision of a fading country star and a rising ingenue set against the twangy, tangled backdrop of Music City, USA — is big and brassy but gets all the little things right, from the casting of professional beef jerky Powers Boothe as an amoral tycoon to the depiction of the recording industry in all its treacherous, flailing, and occasionally inspiring faded glory. But what carries this show is the performance of Connie Britton as an over-the-hill Faith Hill. Friday Night Lights established Britton as a force of nature (not to mention nurture). As Rayna James, Britton is similarly y’all-inspiring, the rare performer able to make headlining the Grand Ole Opry appear as intimate and effortless as brushing her hair. Unlike any number of higher-stakes, critically acclaimed cable shows, Nashville will not surprise you. What’s surprising is how little that matters.

Over the course of his varied career, Shawn Ryan has proven himself a master of squeezing volatile ingredients into palatable entrées. The Shield was a cop show with a psychopath at its center, Terriers sneaked class commentary and genuine heartbreak into a buddy comedy, and The Unit put David Mamet into a situation where he had to behave himself in a room full of other people. (This is a skill sure to be put to the test in Ryan’s next project, too: Adapting an Eddie Murphy classic for CBS in Beverly Hills Cop.) The absurdly ambitious Last Resort, a political/war/utopian/societal/conspiracy-riddled action-romance-drama co-written with Karl Gajdusek, may be his biggest challenge yet. The pilot is packed with an almost absurd level of exposition: The USS Colorado, a naval nuclear submarine captained by Andre Braugher and heartthrobbed by Scott Speedman, defies sketchy war orders and is attacked by its own country. Insulted and enraged, Braugher’s Chaplin sets up his own nuke-waving paradise on a fictional island that looks suspiciously like the final resting place of Oceanic Flight 815. It’s rare to see a broadcast show tackling themes this weighty and budgets this big. It’s rarer still to see it scheduled at 8 p.m. on a Thursday. Chances are good something is going to explode.

UNSCIENTIFIC PREDICTION: Middling ratings and a dedicated fan base lead to a halfhearted full-season order. A spirited e-mail campaign to get Netflix interested starts in April. Interested in the plot but terrified of the cost, Netflix decides to stream Crimson Tide and Club Paradise instead.

Credit where it’s due: Slotting a spooky hour that mixes genre with aspirational glitz and the rising Once Upon a Time on Sunday nights is a smart programming play by Paul Lee. But that’s the lone sign of intelligence surrounding this unintentionally comedic clunker. Set in a haunted Upper East Side high-rise, 666 aims for the devilishness of Rosemary’s Baby, but swaps horror for hokum. Dave Annable (Brothers & Sisters) and Rachael Taylor are the pretty people who move in (as opposed to the pretty people who already live there), and Terry O’Quinn, still belching bits of evil black smoke, is that most familiar of creatures in Manhattan: the landlord from hell. Yes, there are secret frescoes in the basement and certainly there is a mystical ethnic girl who “sees things.” Which is exactly what I won’t be doing with 666 Park Avenue going forward.

“If you ain’t got nothing nice to say about something, well, sugar, I’m all ears.” This is just the sort of down-home hoo-ha I’d imagine Reba McEntire saying at some point during the lifespan of this canned-corn comedy. But I can’t confirm it because I didn’t make it 10 minutes into the pilot. I’m sorry! I tried! But this thing isn’t for me. It’s for people who find jokes about yokels licking pot lollipops hilarious and those who can handle seeing national treasure Lily Tomlin paycheck-scraping with an Irene Ryan imitation, not to mention the few hardy souls able to handle the lovely visage of McEntire looking disturbingly Malibu-like in its current, plasticky immobility. Now, if you’ll excuse me, I’ll be over here with my LaserDisc of Tremors.

UNSCIENTIFIC PREDICTION: Exactly 100 episodes or 12. Either.

As I said at the top, there’s a very good chance that Paul Lee, for all his virtues, simply has terrible taste in comedy. Yet while last year’s Work It was reprehensible on every level, The Neighbors — in which a stock sitcom family (mook dad, harried mom, appallingly precocious kids) discover aliens in the wilds of suburbia — is at least very professionally made nonsense. Written by Dan Fogelman, the guy responsible for uplifting cartoons like Cars and Crazy, Stupid, Love, Neighbors features admirably committed performances from Brits Simon Templeman and Toks Olagundoye as the incognito E.T.s who eat with their eyes and cry from their ears. But it also relies heavily on connecting with viewers who find the name Dick Butkus as hilarious in 2012 as it was when they were 11. There’s nothing inherently wrong with the tired premise or the desire for a goofy, mainstream satire, but Lee’s continual investment in this sort of middlebrow mediocrity seems more defiantly out of touch than the little green men he finds so uproarious.

UNSCIENTIFIC PREDICTION: The Neighbors are sent packing by Valentine’s Day.