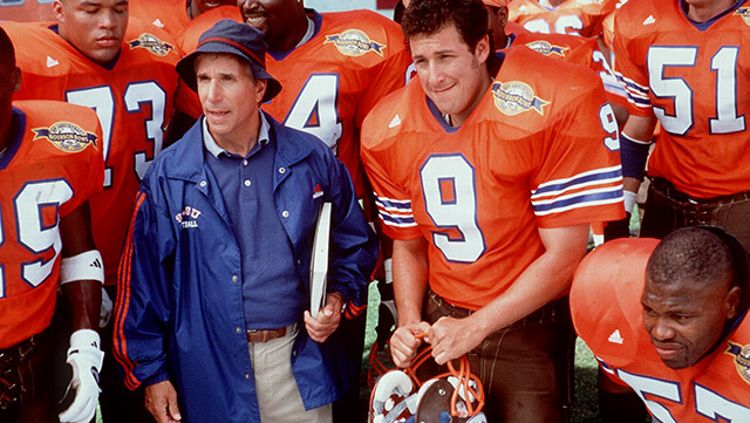 Editor’s note: Every once in a while, we here at the Hollywood Prospectus blog take a break from our back issues of Cahiers du Cinéma and Teen People to check in with the world of sport, and it has recently come to our attention that football season is indeed upon us. Now, if there’s one thing better than watching actual football, it’s watching actors pretend to play football in movies, complete with all the improbable passes, heartwarming speeches, and goofy hijinks usually missing from the real thing. Without further ado: The Grantland staff’s favorite football moments in film.

Rafe Bartholomew: In Manhattan, Woody Allen asks himself, “Why is life worth living?” and answers it with a list: Groucho Marx, Willie Mays, the second movement of the Jupiter Symphony, Louis Armstrong’s recording of “Potato Head Blues,” Swedish movies, Flaubert’s Sentimental Education, Marlon Brando, Frank Sinatra, Cezanne’s “incredible apples and pears,” the crabs at Sam Wo’s, and the face of the woman he loves.

For me, that list is much simpler: cheddar-cheese-and-pretzel Combos, San Miguel beer, and those incredible hits and tackles by Bobby Boucher.

David Jacoby: Bring it on, Bring It On! What these ladies lack in wardrobe, synchronization, and choreography they more than make up for with good old-fashioned gumption.

Tess Lynch: The song at the end of Wildcats won 15 Grammy awards. [Ed. note: Emphatically false.] If you set it on repeat and sync it up with Heaven Can Wait (1978) while chanting “Drew Brees” into the mirror of a dark bathroom, a pizza will arrive moments later with the name of the 2013 Super Bowl championship team spelled out in pepperoni on it. [Ed note: Debatable.]

Robert Mays: I’ve got a story that goes with this one. It’s one of my favorite stories, actually. And the best part about it is that the only people who’d want to hear it don’t have to. They’ve got their own. Simply put, for those of us who still think about high school football a little too much, it doesn’t get any better than these first 90 seconds.

1. The scene where young Knute shows up at dinner all scuffed up from having played football that afternoon and his father starts yapping at him in Norwegian about being late for supper, and Knute says, “Speak American, Papa. We’re Americans now.”

2. The scene in the Army game when Rockne and Gus Dorais use the forward pass for the first time and they cut away to the Army coaches.

No human being in the history of the world ever has talked like this.

Mark Lisanti: It has better wideout play than Jerry Maguire, more improbable last-second heroics than an entire season of Friday Night Lights, and a deeper well of cathartic tears than Brian’s Song. Still, for all of Air Bud: Golden Receiver’s gridiron magic, one thing chafes: Come the fuck on, that ball is totally deflated every time Bud touches it! There’s no way that’s regulation. What? No, YOU suspend your disbelief, asshole. I believe in movie magic, but there has to be a more stable baseline in the real. There’s nothing worse than standing up in your chair to cheer on the world’s greatest two-sport athlete as he sprints towards glory and being yanked back into reality by that kind of sloppiness. I dunno, get a Bud with a bigger jaw. CGI it up. Restore our faith in the giddy possibilities of a hero flanker dog who can actually carry a fully inflated ball. Do something.

The Simpsons — “Man Getting Hit by Football”

Dan Silver: Because it works on so many levels.

Steven Hyden: Robert Altman’s M*A*S*H is a movie so cynical, mean-spirited, anti-religion, and anti-military that it’s hard to imagine it getting made even as a low-budget indie today, much less by a major studio. Even the climactic football game — which leans on the solidly American “slobs vs. snobs” trope — is shockingly un-P.C., with Altman daring to make the key player an African American nicknamed “Spearchucker.” As if there weren’t already enough evidence, M*A*S*H reminds us just how much more interesting the mainstream of pop culture was in the ’70s.

Andy Greenwald: Like a third string quarterback, I was planning on sitting this week out — maybe making myself feel important with a clipboard and a tall cup of Gatorade. But then I heard that no one had picked this, the most definitive football-in-a-movie clip since Hyden stole my initial pick from M.A.S.H. It’s also one of the Tony Scott-iest (R.I.P.!) scenes of all time, with its slashing rain, adrenalized machismo and the sine qua non of gunshot-accentuated rueful zingers.

I always thought EA could make a killing if they built a secret Last Boy Scout mode into a version of Madden: triangle button to jump, circle button to spin, square button to stiff-arm and X button to dispense hot lead. But Roger Goodell would probably object on the grounds of it being entirely plausible. Whatever. NO FUN LEAGUE IS RIGHT.

“Sports Illustrated runs a cover story on Kane and declares him a Heisman Trophy candidate, but he has trouble with the pressure put upon him by the school and its campaign prepared for him, and drinks to deal with his stress. He meets a tennis player, Camille, (Swanson) and as their first date they go on a thrilling and scary motorcycle ride. They then develop a relationship … The film ends with Kane reuniting with Camille offering her another six pack ride (this time it’s Sprite instead of beer).”

Mike Philbrick: This movie really makes me excited for the future. I can’t tell if it’s because the Arena Football League clearly triumphed over what must have been a bloody civil war with the National Football League or that in the process the human race evolved into a super species capable of Matrix-style flips. The only sad part (besides the impending clash with a planet of giant bugs) has to be that HD is just a fad. Come on, Jerry Jones wouldn’t be caught dead using this scoreboard in his house.

Katie Baker: There’s a certain type of movie — Legends of the Fall, Speed, and Mallrats come to mind — that, if you come across it while channel surfing, you will ALWAYS stop to watch. Any Given Sunday is one of those films. I love everything about it, from L.T. chainsawing a Hummer in half to a drunken Ann-Margret crooning with a drunken Al Pacino; from Cameron Diaz’s pitch-perfectly bitchy Christina Pagniacci (the way she pronounces her last name is as crisp and curve-hugging as her hairstyle and wardrobe) and Jamie Foxx’s breakout performance as Steamin’ Willie Beamon (he’s got the ladies … well, you know.) Any movie that has a cast ranging from LL Cool J to Elizabeth Berkley to Charlton Heston is a movie I will gladly spend the rest of my afternoon watching.

My favorite thing about Any Given Sunday is how incredibly well it holds up; in fact, it may even be more relevant now than it was when it was first released. What may have come across a little bit like hyperbole in 1999 is, in 2012, practically an NFL Network documentary. In particular, one of the film’s big sub-plots deals with injuries, including concussions — a topic that is hotter now than it was when the movie was made.

Actually, no, I lied. My favorite thing about Any Given Sunday is Al Pacino’s “life is a game of inches” speech at the end. “BA-TWEEN WINNIN! AN LOSIN! BA-TWEEN LIVIN’ AN’ DYIN!!!!!!!!!!!!!!!!!!!!!!!!!!!!!!!” I watched it last night and then did seven hundred loads of laundry. I watched it this morning and then ran 50 miles, most of them right through brick walls. I don’t recommend watching this clip at the office, because you’re liable to rip your shirt off and then go kill a drifter. It’s pretty much bath salts in YouTube form.

Rembert Browne: Ending this music video with a shirtless Jamie Foxx staring into the camera, saying “IN-FLEX YO CHEST, GET MET-RX,” daintily taking a sip of his HGH-infused strawberry milkshake, and then cheesing back into the camera will never be topped. To quote top YouTube commenter “silentfrwy”: “after seeing this sequence in the movie, I was convinced that one day Jamie Foxx would win an oscar or golden globe, or something. just look at that smile at the end! That is the cheesiest fucking smile in the world. That takes talent.”