Fall Out Boy Returns, Trying to Save Rock and Roll 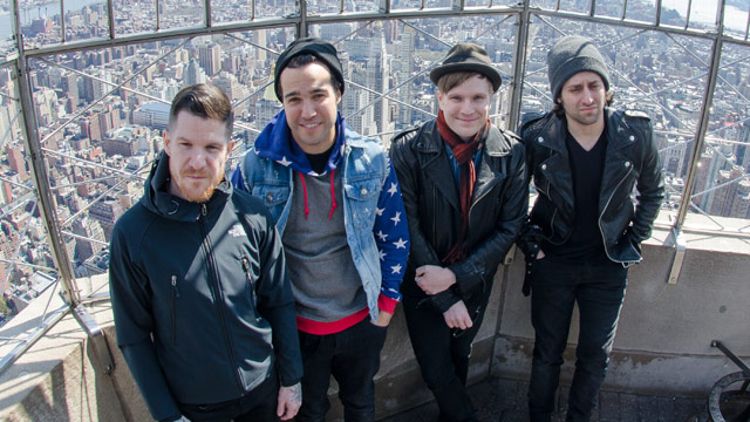 Fall Out Boy formed on the not-at-all-mean streets of Chicago’s North Shore, the same bucolic suburbs that birthed the late filmmaker John Hughes. Though separated by age, medium, and, blessedly, fashion sense, the band and the director were united by a shared respect for the outsize passions of adolescence, their songs and films always opting for the warm “we” over the harsh “you.” It’s a type of collectivism that resonates: Fall Out Boy brought the fractious, fractured punk scene from the basement to the arena, headlining the decade-long transformation of an arty, antagonistic subculture into a supportive Breakfast Club of occasionally heartbroken normals. Theirs was an all-inclusive iconoclasm. Fall Out Boy was punk the way Ferris Bueller, Hughes’s greatest creation, was punk: outsiders by choice, wearing weird vests and using charm and soft feelings to rail against hard truths. They weren’t bomb throwers; they threw parades instead. The only difference between Judd Nelson punching his fist into the air and an entire hockey stadium doing the same is a couple bad puns and a couple hundred decibels.

Eight years ago Fall Out Boy broke big with “Sugar We’re Going Down,” a rousing single that imagined teenage nookie as a full contact sport. Five years ago the band released their best album, Folie a Deux, a surprisingly mature Livejournal post about love, fame, addiction, and the teetering Jenga tower constructed when one tries to balance all three. Four years ago they broke up. Now they’re back as if no time has passed at all. Musically that’s a very good thing. Culturally? It remains to be seen.

Despite the name of the surprise comeback album released on Tuesday — recorded in secret, accidentally announced via Instagram — the return of Fall Out Boy isn’t likely to Save Rock and Roll. I wouldn’t even bet on it providing more than a few minutes of palliative care. But here’s a claim bolder than the record title: No band did more to keep rock and roll on life support during the last decade than these four mismatched doofs who named themselves after a minor Simpsons character. While mainstream guitar music spent the 2000s retiring to Wisconsin drinking cabins or up its own ass, all while giving technology the stink-eye like Harrison Ford at a replicant factory, Fall Out Boy wore the zeitgeist like a white belt. They released mixtapes and collaborated with R&B stars. They wrote metatextual megajams packed with elaborately winking hyperlinks. They wrote songs about themselves writing songs.

Even their organizational flowchart reads more like an Internet start-up than a rock band. In Fall Out Boy Inc., one guy was responsible for the content and the other, arguably more important guy took care of branding. (There were other guys, too, Joe Trohman and Andy Hurley, but they mostly took care of the guitars, drums, and beards.) It helped that the content guy, a shy belter named Patrick Stump, was a pan-genre polymath with a goalie’s physique and a diva’s pipes. Stump added both soul and pathos to Pete Wentz’s pages of tell-don’t-show lyrics. (“A loaded God complex / cock it and pull it” is the sort of thing that sounds good when scribbled in a Moleskine at three in the morning, but you try singing it.) And while Wentz’s angst could get plenty clever — I’m partial to “The Carpal Tunnel of Love” — his real talent lay in his relentless personality. He did everything a proper rock star ought to do in the 21st century, appearing on teen soap operas, starting a fashion line, and knocking up the bottle-blonde star of a reality show. His attitude was more than pop, it was populist. Armed with only a bass and a hair iron, he did his best to drag rock music out of the Dave Grohl Rest Home of Respectability and back into the national conversation.

The problem is, it was always more of a monologue. And while Save Rock and Roll picks up just where Folie à Deux left off, it feels more and more like a communiqué from an alternate universe, one where stomping glamazon singles like “My Songs Know What You Did in the Dark” have a chance of rubbing shoulders with 2 Chainz on the charts, not just in the video . Wentz always mythologized his band as a kind of emo army — see 2007’s “This Ain’t a Scene, It’s an Arms Race” — but now they’re the only superpower left standing. Still, one of the advantages of enormous ego is the ability to see enemies everywhere. Album opener “The Phoenix” rages against interlopers “wearing our vintage misery” (before adding, snottily, “No, I think it looked a little better on me”), and everything — guitars, hubris — is cranked up to Tufnellian levels of excess. On the strummy “Young Volcanoes,” the band are “the lions / free of the Coliseum” and, later, the foxes set free to hunt hounds. The announcement of Save Rock and Roll was greeted with rapturous ecstasy by Fall Out Boy fans and an encouraging shrug by the world at large. Sometime you have to ask someone why they’re only hitting themselves.

But even despite the abundance of buzz and bluster, the bad breakups and worse puns, Save Rock and Roll is more or less excellent. Stump’s tuxedo-wearing time in the solo trenches seems to have bolstered his ear for melody — “Alone Together” and “Miss Missing You” are skillful, skyscraping dance pop — and his eye for casting: “Rat a Tat Tat” finally hands Courtney Love the role she was born to play, that of Mark. E. Smith. (As for “The Mighty Fall,” a tepid collaboration with rapper Big Sean, well, there’s a case to be made for it on a conference call with investors but that doesn’t mean I have to listen in.) The production, by chart-whisperer Butch Walker, polishes everything until it’s in your face and gleaming: the apocalyptic strings of “The Phoenix,” the louche bottom-feeding of “Where Did the Party Go,” the Adele-aping intro of “Just One Yesterday.”

Wentz’s wordplay occasionally needs a timeout — “my heart is like a stallion / they love it more when it’s broken” is one clunker — but over the course of the album’s 11 tracks his unironic wistfulness strikes a chord. A decade ago, his Peter Pan–in-a-hoodie act seemed emotionally stunted but culturally attuned to the world at large. It was a time of big, dumb politics and big, scary events; naming albums after children’s books and writing children’s books named after Smiths songs seemed like a reasonable response for a generation that had plenty of reasons to avoid growing up. Now 33 years old, divorced, and the father of a young son, Wentz seems nostalgic for immaturity, not shackled by it. The album ends with the title track, a heavy-handed, heavy-hearted piano ballad featuring Elton John. Like this album, it’s the sort of thing that should tip over like a lead balloon, but instead it soars. “I need more dreams and less life,” Stump-as-Wentz sings, before claiming to be “the last kid kicking that still believes.” It’s a relatable sentiment for anyone who spent their youth without realizing it could never be paid back.

The New Man of Steel Trailer: The Birth of the Summer Tearbuster