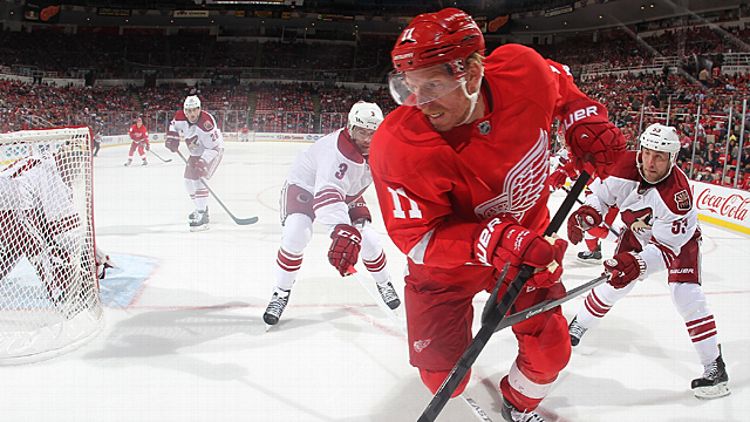 The biggest game on this week’s NHL schedule will be one of the last: Sunday night’s matchup between the Senators and Red Wings in Ottawa. While there will probably be better contests, there won’t be a more emotional one, as the game will mark the first time that longtime Senator captain Daniel Alfredsson will play in Ottawa since signing with Detroit in the offseason.

That signing was a shock at the time, and it has led to an ugly divorce between Alfredsson and the Senators, with both sides accusing the other of putting money ahead of loyalty. All of which leads to the inevitable question: What kind of reception will Alfredsson get from Ottawa fans?

In an era when fewer and fewer players spend their entire career with one team, Alfredsson’s situation is far from unique. In just the past decade alone, we’ve seen several high-profile stars return to the city where they made their name. Some got a hero’s welcome. Others got something very different.

What should Alfredsson expect? Let’s look at five possibilities, as helpfully demonstrated by other stars from recent years.

The backstory: Alfredsson won’t be the first player that Ottawa fans get to welcome back under less-than-ideal circumstances. Whether it’s Alexandre Daigle, Alexei Yashin, Marian Hossa, or Bryan Berard, there’s something about the Senators franchise that tends to lead to ugly breakups.

Heatley’s may have been the ugliest. He’d established himself as one of the best players in Senators history, recording back-to-back 50-goal seasons in the first two years after the lockout. But after the 2008-09 season, Heatley told the Senators that he wanted to be traded. To this day, he has never explained exactly why he wanted out, though a personality conflict with then-coach Cory Clouston is the main suspect.

To make matters worse, Heatley used his no-trade clause to block a deal to the Oilers that the Senators liked better than San Jose’s eventual offer — delaying a move long enough to force Ottawa to cough up a $4 million roster bonus.

The return: The Sharks weren’t scheduled to visit Ottawa during the 2009-10 season, so Heatley’s first game back didn’t come until well more than a year after the trade. If he was hoping that time would heal some wounds, he underestimated Senator fans.

The last laugh: At first, it seemed to be all Heatley’s. He played well in his first year in San Jose, while Clouston was out of the NHL by 2011. But Heatley’s play gradually dropped, and the Sharks dealt him to the Wild after only two seasons. These days, he’s been seeing fourth-line duty in Minnesota.

Meanwhile, the main piece the Senators got back in the trade — winger Milan Michalek — is still in the Ottawa lineup and has been more productive than Heatley since the deal.

Chances it happen to Alfredsson: Better than you’d think — there’s a surprisingly strong number of Sens fans who feel that their former captain stabbed them in the back, and who have no desire to forgive and forget. The “should Alfredsson get a ‘welcome back’ scoreboard video” debate has been going strong in Ottawa for weeks, and emotions are running so high this week that there have been reports of people getting their coworkers’ Tim Hortons order wrong without apologizing quite as profusely as normal.

The backstory: Modano had spent his entire 20-year career with the Stars organization (the team was based in Minnesota for the first four seasons) and was the franchise leader in just about every conceivable category. But when his contract expired in the 2010 offseason, the Stars weren’t interested in having him return.

The return: Modano received a hero’s welcome from Stars fans when he and the Wings took the ice. Midway through the first, the Stars posted a short “Thank you, Mike” message on the scoreboard, leading to another lengthy ovation from fans and players alike.

The last laugh: There really wasn’t one. Modano’s lone year in Detroit was a disappointment. He missed half the season to injury, managed just 15 points, and appeared in only two playoff games as the Wings were eliminated in the second round. He hung up his skates after the season, and the Stars have announced plans to retire his number in a ceremony next March.

Chances it happens to Alfredsson: Alfredsson played in Ottawa for 17 years, was captain for 13 of those, and was heavily involved in the community. Many Senator fans have already forgiven him, while others never blamed him in the first place, choosing to focus their wrath on tightfisted ownership instead. He’ll definitely hear some cheers. But will it be unanimous? Probably not.

Option 3: We can’t tell you how we feel because you’re not here (i.e., the Rick Nash)

The backstory: Nash stands as the most successful player in the 13-year history of the Columbus Blue Jackets, narrowly edging out that one guy who remembered to take his skate guards off before his first shift. He was a former first overall pick, the franchise leader in every major offensive category, and the team’s captain.

But after making it known in February 2012 that he wanted to be traded (and somewhat surprisingly not being moved at the deadline), he was sent to the Rangers that July in a multi-player deal.

The return: The Rangers and Blue Jackets didn’t play in 2012-13 because of the lockout. When the 2013-14 schedule was released, Columbus fans immediately circled November 7 — the day they’d get their first look at Nash wearing a visitors uniform.

But like everything Blue Jacket fans have ever been excited about, the return ended up being a dud. Nash suffered a head injury in October and missed 17 games, including the one in Columbus.

The last laugh: Still to be determined. The Rangers had hoped that Nash would be the final piece of a Stanley Cup puzzle, but while he’s been solid, the team as a whole has taken a step back. Meanwhile, the Blue Jackets have improved since the deal but are on track for yet another year of missing the playoffs.

And in case you’re wondering, the Rangers are scheduled to return to Columbus on March 21, 2014. More than two years after he told them he wanted out, Blue Jacket fans will finally get a chance to welcome Nash back to Columbus … we hope.

Chances it happen to Alfredsson: It was starting to look like a possibility. Alfredsson recently missed five straight games with a groin injury, but finally got the go-ahead to return to action Sunday. If he can make it through the Wings’ next two games, he’ll be in the lineup in Ottawa.

The backstory: Thornton was the first overall pick of the 1997 draft and seemed to be on track to become the Bruins’ franchise player. He’d played in three All-Star games, and had ranked third in scoring in 2002-03, thanks to a 101-point season.

But just 24 games into the 2005-06 season, the Bruins dealt Thornton to the Sharks for Marco Sturm, Wayne Primeau, and Brad Stuart. It was a puzzling deal at the time and despite occasional attempts to spin it otherwise, it remains so today. Thornton claimed he was “blindsided” by the move (he’d just signed an extension that summer) and seemed to criticize Bruins management on his way out.

The return: Thornton’s return to Boston two months later ended up being one of the strangest homecomings in NHL history. He received a largely mixed reaction from Bruins fans when he took the ice before the game, as well as on his first few shifts.

Then, five minutes into the game, this happened:

Thornton’s hit from behind on Hal Gill earned him a five-minute major and an early shower. The final tally on his big return: three shifts, 2:31 of ice time, no points, and 15 PIM.

The last laugh: Thornton’s first game back in Boston was one of the only ones all season in which he was held off the scoreboard. He’d go on to post a career-high 125 points to lead the NHL, and he became the first (and so far only) player to win the Hart Trophy as MVP for a season during which he was traded. These days, his returns to Boston are typically marked by a warm welcome.

Chances it happen to Alfredsson: None. According to every Sens fan I’ve ever known, Alfredsson never hits guys from behind.

Option 5: We are not sure how we feel right now (i.e., the Mats Sundin)

The backstory: By 2008, Sundin had spent 13 seasons in Toronto and made a strong case for himself as the best player in franchise history. But the Leafs were drifting badly in the salary-cap era, and when general manager John Ferguson Jr. was fired in February, it was clear that the team planned to hold a fire sale at the trade deadline.

Sundin was the most attractive trade chip the team had, but he (and just about everyone else in the lineup) had received a no-trade clause from Ferguson. Sundin decided not to waive his clause, the rest of the team followed suit, and the Leafs’ opportunity to jump-start their rebuild slipped away.

By the 2008 offseason, it was clear Sundin wasn’t coming back to Toronto (though which side made that decision is still a matter of some debate), and retirement seemed to loom. He eventually sat out the first half of the 2008-09 season before signing with the Vancouver Canucks in December.

The return: Leaf fans were largely split on Sundin. Some viewed him as a hero who’d merely exercised his contractual rights, refusing to quit on a team he was loyal to. Others saw him as a villain who refused to leave his comfort zone to chase a Cup like so many other veteran stars had done, then bolted for more money once free agency hit.

Needless to say, the reaction when he returned to Toronto was mixed, and he was met by a 50/50 split of cheers and boos when he stepped on to the ice. But a first-period scoreboard tribute was met with an emotional ovation that left Sundin fighting tears:

The last laugh: In the short term, it was all Sundin’s — the night of his comeback, he scored the dramatic shootout winner to beat his former team in storybook fashion. But his Vancouver comeback fizzled with lackluster numbers and a second-round exit, and he has since expressed some regret about leaving Toronto.

Chances it happen to Alfredsson: Get your shootout move ready, Daniel, because I think we’ve found our winner.