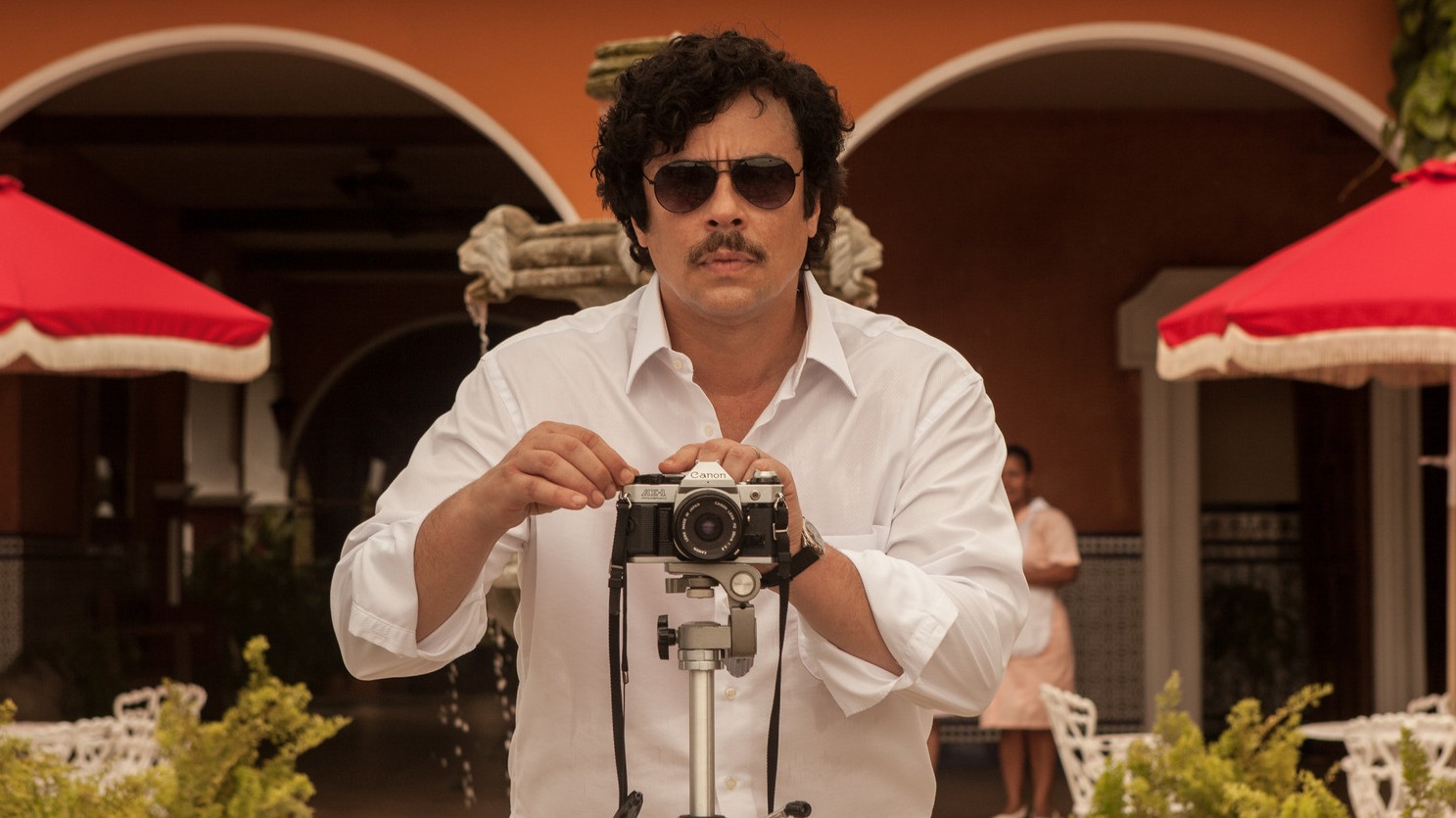 With all due respect to the great Super Mario, few portly, mustachioed men have ever captured our imagination quite like Pablo Escobar. For years, Escobar ran one of the largest drug-selling operations in history; operating out of his personal fiefdom in Medellín, he flooded the world with his high-grade Colombian cocaine. That he destroyed lives — both figuratively and literally, by his own hands — is undeniable. That he lived like a sickening cartoon character  is also not up for dispute. And still, his legacy, more than two decades since his grisly death, is complicated.

There are those who wept and gnashed their teeth when he passed, remembering him as a man who did what he did only for the betterment of his people. When you enter the realm of myth, things get messy.

This week, the movie Escobar: Paradise Lost becomes a new entry in the annals. The young Josh Hutcherson stars as an American in love with the niece of a powerful fellow; the great Benicio Del Toro stars as Escobar.1

This isn’t the first time Escobar has been represented in art, nor will it be the last. From aborted big-budget Hollywood projects to hip-hop alter egos to infamous movie-within-a-show productions, Escobar is a veritable chestnut of American media. Herewith, a brief examination of the varied pop culture history of El Patrón.

Onscreen portrayals of Escobar have been surrounded by deaths, just as he was in real life. Oliver Stone’s rumored Escobar project, Mi Hermano Pablo, never materialized, and neither has Antoine Fuqua’s take. Oscar Isaac was supposed to do one, too.

In 2013, Spanish director Enrique Urbizu was reported to have a project called Silver or Lead, a reference to Escobar’s famed policy toward his would-be enemies: plata o plomo. (More or less, you want the money or you want the bullets?) In 2014, a Variety headline declared, “John Leguizamo’s Pablo Escobar Project Headed for Puerto Rico Shoot.” Those have also yet to surface.

And before his Neeson vs. Wolf classic, The Grey, Joe Carnahan was sure he was doing Killing Pablo. “[The] script’s 100% greenlit and ready to go,” he told Collider in 2012. “I just have to go cast it. I have to decide when I wanna do it, which I’d love to do it in the fall. That’s assuming that The Grey doesn’t come out and fucking tank (laughs).” God is good, and so The Grey didn’t tank. Was it, then, pure hubris that sank Carnahan?

Of course, greater men than Carnahan have been nearly felled by Escobar. No less than Vincent Chase himself nearly lost his Hollywood career trying to stage the infamous Medellín.

These past few years, though, have actually been pretty good to Escobar-heads. In 2010, we got the 30 for 30 soccer doc The Two Escobars, a trailing of the twinning narratives of Pablo and the doomed defender Andrés Escobar. It was excellent, and I swear I’m not just saying that because the people who make those things sit down the hall. Following Paradise Lost in 2016 will be The Infiltrator, in which Bryan Cranston plays an undercover agent who dares impede Escobar’s business. And at Cannes, the announcement came down that power couple Javier Bardem and Penélope Cruz will soon have an Escobar of their own.

And before all of those films become cocaine-dusted reality, let’s remember Johnny Depp’s Blow, featuring the chameleonic Cliff Curtis2 taking on Escobar.

As you certainly will not be surprised to hear, rap music loves co-opting Escobar.

In 2014, Soulja Boy named a track “Pablo Escobar,” then mostly stayed on-brand by speaking volubly about his voluminous wealth. He did, however, at one point, state, “Money coming in, I feel like Pablo / Cheese coming like it is nacho.”

In 2006, on his breakout single “Hustlin’,” Rick Ross gave us this instant classic line: “I know Pablo / Noriega / The real Noriega he owe me a hundred favors.” Making it way, way better? For a little while, Ross attempted to back up his claim that he was familiar with the infamous men, and not just with the rappers who borrowed their names.3 “Noriega owe a hundred favors, you know what I’m sayin’?” Ross once told AllHipHop. “It’s just like, you know, I kick it with [Pablo] Escobar nephew. He live down here. That’s my n***as, you know what I’m sayin’?”

On the remix to the track, Young Jeezy tweaked Ross’s line to shout out the imprisoned head of Atlanta’s Black Mafia Family: “I know Big Meech, the real Big Meech / It’s over for you clowns soon as my n​-​-​-​- hit them streets.” Jeezy definitely does know Meech, and it probably is over for you clowns as soon as Meech hit them streets. Luckily for said clowns, as it currently stands, that won’t be until 2032.

In rap music, though, no one has done more co-opting of the Escobar name than, surprisingly enough, Nasir Jones. After his coming-of-age debut, Illmatic, became an instant classic, Nas went street dreams. Around that mid-’90s era — most explicitly with doomed supergroup the Firm — he would intermittently become Esco.

The identity wasn’t universally well received for the fans who loved him for his pensiveness, and on “The Takeover,” Jay Z would hammer him for it: “Went from Nasty Nas to Esco’s trash / Had a spark when you started but now you just garbage.” Eventually, Nas would abandon it altogether.4

But let’s not forget that when Nas was locked in — namely, for the five minutes and 18 seconds of the all-time manic freakout “Hate Me Now” — he did swaggering gangster braggadocio as well as anyone. “Nickname Esco, took this game to its threshold / Best flow, I bet the whole U.S. know,” let’s gooooo.

Were these rappers right to wanna be like Pablo? In the grander, ethical sense of the question — well, it’s art, so that question is complicated. But even practically speaking? Sort of. For a long, long time, Escobar did enjoy the fruits of his ill-gotten gains. But by the end, as he was on the run, things were dire.

As Mark Bowden writes in Killing Pablo, “The deaths of his cousins and brother-in-law, the surrenders of the Ochoas … his organization was falling apart. The man who just a year earlier had dozens of luxurious estates to choose from was now sleeping some nights in the woods in the mountains, running to stay ahead of his determined pursuers.”

For a full account of the tortuously complicated life and death of Pablo Escobar, you’d do well starting with Killing Pablo. It was published in 2001, and Carnahan’s aforementioned movie was to be based on the book. It tells the winding tale of how Colonel Hugo Martinez — and, dramatically enough, his maligned tech-head son, Hugo Jr. — eventually tracked Escobar down.

There were multimillion-dollar bribes, ruthless police assassinations, and then-groundbreaking technology. There was obsessiveness; as Bowden writes, “The colonel knew what kind of shoes Pablo wore (white Nikes), what kind of sheets he liked on his bed, the preferred age of his sexual partners (girls of 14 or 15, usually).” And there was a dramatic final shootout.

“[Pablo] stopped to kick off his flip-flops, then jumped down to the roof … he stayed close to one wall, where there was some protection. The shooter on the roof overhead could not get a clear shot directly down at him, so there was a break in the firing momentarily as Pablo quickly moved along the wall toward the back street. No one on the street had a clear shot at him yet. At the corner, Pablo made his break.

He went for the crest of the gently sloping roof, trying to make it to the other side. There was a thundering cascade of fire and Pablo fell near the crest. He sprawled forward, dislodging orange tiles.

The shooting continued … Everyone was shooting on automatic from below. Rounds chewed up the brick walls around the enclosed rooftop. It felt as if it took minutes for the shooting to die down, for the Search Bloc to realise they were the only ones shooting. Finally, it stopped. The shooter on the second-floor roof shouted, ‘It’s Pablo! It’s Pablo!’

The wide bearded face was swollen, bloody, and wreathed in long, blood-soaked black curls. The major grabbed a radio and spoke directly to Colonel Martinez, loudly enough for even the men on the street below to hear. ‘ Vivá Colombia! We have just killed Pablo Escobar!'”

For a gentleman to whom one could safely refer, truly with no malicious intent, as “schlubby,” Escobar has quite a history of visual depictions. Look around the Internet and you’ll find gorgeous portraits bordering on the abstract; you’ll find graphic-novel-esque renderings that make their politics quite clear; you’ll find at least one mural paying homage to Escobar alongside his fellow “original gangster,” Jigsaw from Saw. There’s also an image that seems to — but probably does not intend to — depict the man in the midst of an ’80s open-mic stand-up set. As with the other pop mediums, the visual arts just can’t help but lay their hands on the carcass of Pablo Escobar.

Most importantly: Please, someone buy this for me. It’s all the Escobar-related art anyone could ever need. 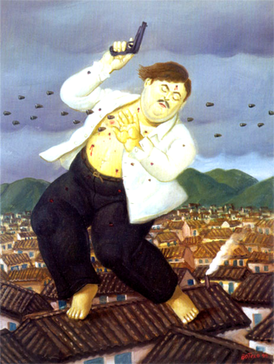