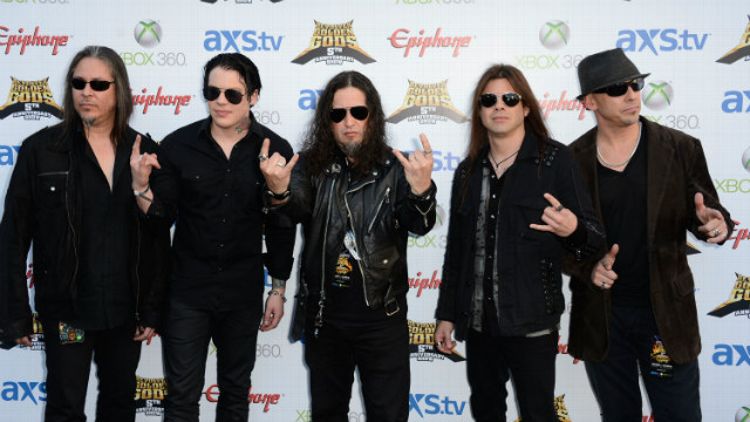 Welcome to Escape From Pop Purgatory, where we check out new music made by people who are more well known than 98 percent of the oppressively “cool” artists over whom the media obsesses, and yet are commonly perceived to be years past the point of their cultural relevance. (Pop Purgatory is fame plus time.) Because we’re unwilling to let albums released by established if unfashionable pop culture institutions come and go without a proper listen, we’re giving these damned souls a shot at redemption — or at least some much-needed publicity outside of their respective fan bubbles. In this installment, we look at the new, self-titled LP from one of the current incarnations of the prog-metal band Queensrÿche. (We’ll explain in a moment.)

Period of Peak Fame: 1988-90. A grandiose metal band in the vein of Iron Maiden and Judas Priest trapped in a dressed-down grunge town, Queensrÿche formed in Seattle in 1982 and subsisted as a perennial opening act until the release of the ambitious concept album Operation Mindcrime, which indulged the band’s pseudo-intellectual, Pink Floyd–inspired side. Mindcrime fortified Queensrÿche as a cult act for serious metalheads, and the next album, Empire, made them rock stars — it went triple platinum and outsold the band’s previous four records combined. The breakout song from Empire was the top-10 power ballad and early ’90s middle school dance staple “Silent Lucidity,” a defining song of a distant era where pompous songs by ponderous metal bands could actually pass as pop music.

What’s Happened Since: Queensrÿche toured for more than a year as world-conquering headliners behind Empire, which is partly responsible for the four-year wait for 1994’s Promised Land. You can probably guess what happened next: While Empire snuck in right before alternative music became the signature sound of mainstream rock, Promised Land was a frilly-shirted anachronism that was seriously out of place in a field of Green Days and Pearl Jams. A few years later, founding member and songwriter Chris DeGarmo departed to become a business jet pilot; worse, the group found itself under the heel of increasingly tyrannical lead singer Geoff Tate, who steered Queensrÿche away from its bedrock melodic metal sound. Tensions in the band came to a head in 2012 after the group’s core of original members decided to fire manager (and wife of Geoff) Susan Tate, prompting a series of onstage blow-ups by Geoff Tate (involving spitting and excessive “pussy” taunts) that necessitated his firing from Queensrÿche. Tate struck back by forming his own version of Queensrÿche with hired guns such as ex–Quiet Riot and Ozzy Osbourne bassist Rudy Sarzo and ex-AC/DC drummer Simon Wright, while the old (real?) Queensrÿche hired Crimson Glory’s Todd La Torre and continued touring and recording a new album.

Where Are They Now: In April, the Geoff Tate version of Queensrÿche released Frequency Unknown — if the album title is too subtle for you, the album cover spells it out with an angry fist wearing “F” and “U” rings. Tate’s aggressive petulance does Frequency Unknown no favors, nor do the rerecorded versions of Queensrÿche classics like “Silent Lucidity” and “Jet City Woman” that take up a quarter of the bloated tracklist. As for this Queensrÿche — the other Queensrÿche? The Queenrÿcheier Queensrÿche? — the band members have wiped Tate’s saliva off their brows, put the past behind them, and moved forward with dignity and confidence. Putting out a self-titled record more than 30 years into your career is a stock “we’re hitting the reset button” move, but Queensrÿche truly is a successful reboot.

The album works because Queensrÿche understands its audience better than Tate ever did. During a recent appearance on VH1’s That Metal Show — which is American Bandstand for prospective buyers of Queensrÿche records in 2013 — La Torre and drummer Scott Rockenfield essentially promised that their new album would sound exactly like the old stuff, with La Torre implying that he did a more than adequate Geoff Tate impression. And you know what? La Torre and Rockenfield weren’t lying. Queensrÿche is a consistently enjoyable delivery system for harmonized guitar leads, operatic vocals, anthemic melodies, and all the other characteristics of the band’s late ’80s prime. Even better, it’s extremely well edited — at 10 tracks and 35 minutes, Queensrÿche is tight, punchy, and surprisingly welcoming to repeat listens.

Representative Track: While this Queensrÿche has mostly taken the high road in its battle with that Queensrÿche, songs with titles like “Vindication” and “Don’t Look Back” make the band’s post-Tate intentions thunderously obvious. The best of these self-motivational tracks is “Redemption,” a relatively epic number on an otherwise brisk record (at 4:17, it’s nine seconds shorter than Queensrÿche’s longest song) about being “the change that you want to see.” It’s a lot classier than saying “Who’s the pussy now, asshole?” but it basically means the same thing in this context.

Escape from Pop Purgatory: Yes. You have distinguished yourself as the Queensrÿcheiest Queensrÿche, Queensrÿche.