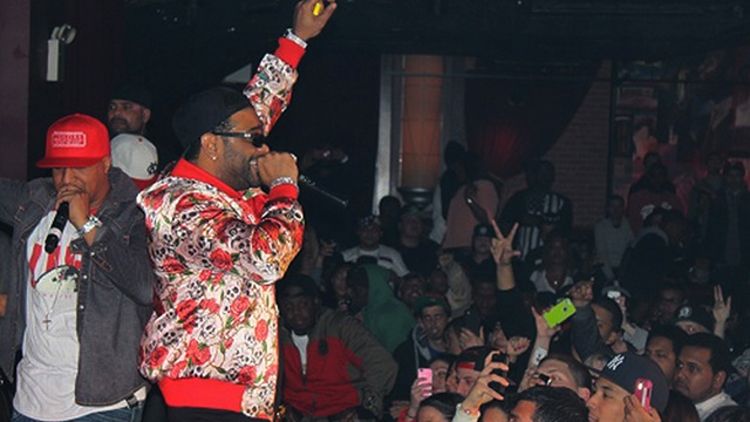 It was May 2004. My closest childhood friend was graduating from high school in Montclair, New Jersey, and my mother and I made the trip up from Atlanta to watch him walk across the stage. It was my first trip up north, and I was excited but nervous. After the ceremony, picture-taking, and some family time, it became clear I was tagging along with Dean, the graduate, for the requisite postgraduation party.

While no stranger to a high school Bacardi Limón grinding session, the scene at this Jersey rager was markedly different from the ones I’d grown accustomed to back home. It was spring 2004 after all, and in Atlanta that meant one thing: the all-out radio assault of singles from the legendary The King of Crunk & BME Recordings Present: Trillville & Lil Scrappy. Between the Trillville side (“Neva Eva,” “Get Some Crunk in Yo System,” “Some Cut”) and the Lil Scrappy side (“Head Bussa,” “No Problem,” “F.I.L.A. (Forever I Love Atlanta)”), one album managed to supply the entire soundtrack for the first quarter of the year.

These were not the songs played in Montclair that night.

Already feeling out of place, because I knew only one person in this crowded room filled with tall tees and Avirex jackets, the situation only worsened as the soundtrack became more and more foreign to my crunk-only ears, the tipping point being the song “Dipset Anthem.” I knew the song, but I didn’t know the song. When the first notes hit, it was that moment at every good party when you can see people prepping themselves for a move that will sweep through the entire room. I know that now, but at the time I wasn’t aware that with “Dipset Anthem” came “the Dipset Anthem dance.”

The moment was traumatic. I was the only one standing upright as the rest of the room dipped. I’d never felt as lame in my entire life. I walked out of the party. To this day, I don’t remember a single thing that happened for the remainder of that trip.

This was my real introduction to New York hip-hop. I knew the forefathers, was well-versed in my Biggie and Pun and Rakim and Wu-Tang, but when it came down to it, my appreciation for the city and its hip-hop will always come back to “Dipset Anthem.” And the Diplomats. And Diplomatic Immunity.

Everything about the album, released in March 2003, stood out from the pack. It’s a double album, but unlike most, it merited its two discs. The album cover isn’t just a photo, it’s a call to arms. And, if I may speak like Cam’ron for a second, for a remarkably gully album, the foundation of the work is extremely soulful. Sampling the Commodores, Jerry Butler, Marvin Gaye, the Delfonics, and three different O’Jays songs, it’s truly like nothing that came before it.

And, after all of that, it happens to be the home of the near-perfect rap song “I Really Mean It” (had Jim Jones not said “f—–” twice, it wouldn’t have a single flaw).

Few things can really date a 25-year-old, but this album turning 10 does the trick. But not in a bad way, rather in a way that transports me back to that murky room in Montclair, wondering why I couldn’t get a girl to give a young man in Old Navy Carpenters and a form-fitted, sky-blue Kobe Bryant Lakers jersey the time of day. I wanted that feeling again.

Luckily, Cam’ron, Juelz, Jim, and the gang made that a reality by putting on a 10th-aniversary show last night.

Nothing about this show made sense, which made it the perfect way to celebrate Dipset. For starters, the show was in Times Square, at B.B. King Blues Club & Grill, which is the appropriate size, but not a place that screams “Hell Rell.” Equally odd, the start time for the show was 11:30 p.m. On a Monday night. Perhaps this was a way to let people observe the first night of Passover and then come out and after-party, but when you see “11:30” and “Cam’ron,” you’re forced to assume it won’t be starting until 1 a.m.

I had three goals at this concert: blend in with the crowd while staying true to myself (always important), dip appropriately when “Dipset Anthem” came on, and not embarrass myself (with tears) when they play “I Really Mean It.” The first two were easy: I just threw on some Timberlands and made sure my shoulders were ready to lean back at a moment’s notice. But after the Dips began their set at 12:15 a.m., with each passing track (“Bout It Bout It … Part III,” “Get It in Ohio”) and “wow, I forgot you existed” guest (J.R. Writer), I could feel my emotions rising. “I Really Mean It” was not going to be pretty for me.

The show as a whole was everything you could have wanted. There were upwards of 50 people onstage, many of the lyrics were indecipherable, and everyone had gained a little weight. Jim walked around with a mic in one hand and a bottle of something in the other, Cam disappeared for about 20 minutes in the middle, and you were constantly reminded through the lyrics that this was, in fact, “powerful music.” And, no matter what shenanigans were happening onstage, the fact that Cam, Juelz, Jim, and Freekey had all shown up was phenomenal and not to be taken for granted.

When it was finally time for “Dipset Anthem,” I knew what to do. And I did it. My life had finally come full circle. Take that, Montclair. Sadly, the same can’t be said for “I Really Mean It,” because I couldn’t control myself. Weirdly enough, embarrassing myself to that song is part of staying true to myself. Perhaps, even almost nine years later, I still wasn’t ready to handle Dipset in public.

With that in mind: Here’s to another 10 years of listening to Diplomatic Immunity in the privacy of one’s home, with Tims on, weeping and acting as if you’re the champion of something. That’s what the Diplomats represent. That and, of course, powerful music.

Filed Under: Cam'ron, Hip Hop, We Went there