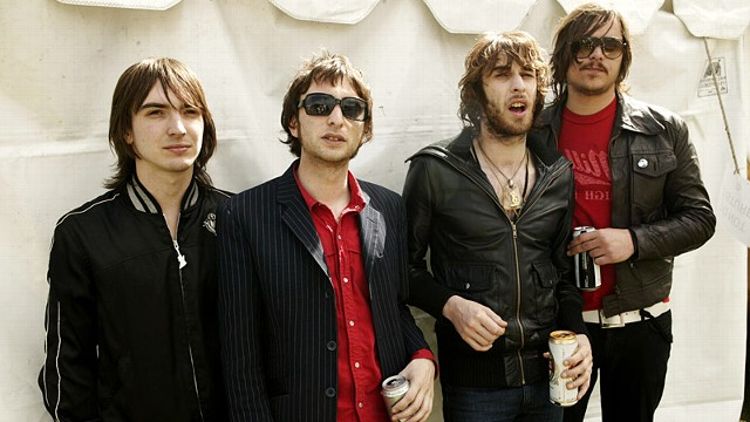 In the early ’00s, the Strokes (along with the White Stripes) helped to usher in a wave of sharp-dressed, retro-leaning “return of rock” bands that were supposed to wash out the nu-metal and post-grunge clogging up mainstream rock radio. While this wave wasn’t entirely successful in that regard, several of these bands have proved enduring, including Interpol, the Yeah Yeah Yeahs, the Killers, Kings of Leon, and the Black Keys. Many more bands were swept into the historical buzz bin. In honor of the Strokes’ new album, Comedown Machine, and with apologies to the Vines, French Kicks, Louis XIV, etc., here are 10 songs from the period’s lesser lights that I still put on personal playlists. And to listen to all of them, here is a handy Spotify link.

1. Longwave, “Wake Me When It’s Over”
I remember buying 2003’s The Strangest Things because I read that Longwave hung out with the Strokes, which I guess makes them the Rob Schneider of early ’00s NYC rock. Still, I love this song at least as much as any track on Room on Fire.

2. Jet, “Cold Hard Bitch”
Rolling Stone’s 2003 Strokes profile includes an oft-repeated anecdote in which Albert Hammond comes upon a Jet CD (presumably 2003’s Get Born) in a record store, and says, “They make me not want to play music.” You don’t have to be as cool as Albert Hammond in ’03 to shit on Jet, but “Cold Hard Bitch” (and “Are You Gonna Be My Girl”) prove (once again) that coolness can’t compete with Australians who either are AC/DC or sound like AC/DC.

4. The Hives, “Hate to Say I Told You So”
Like if the Strokes listened to more Buzzcocks.

5. Hot Hot Heat, “More for Show”
Like if the Strokes listened to more Cure.

6. Secret Machines, “The Road Leads Where It’s Led”
Like if the Strokes listened to more Pink Floyd.

7. The Darkness, “Love Is Only a Feeling”
Like if the Strokes listened to more Def Leppard.

8. The Stills, “Gender Bombs”
If the Strokes were a little more sensitive and a lot more Canadian, they would’ve sounded like the Stills. 2003’s Logic Will Break Your Heart doesn’t have an ounce of grimy sex appeal — there’s a song called “Allison Krausse” — but it is likable, melodic, and very, very nice.

9. The Von Bondies, “C’mon C’mon”
Jack White once punched out the lead singer of this band in a Detroit bar. This song and that factoid are the sum total of pertinent Von Bondies knowledge.