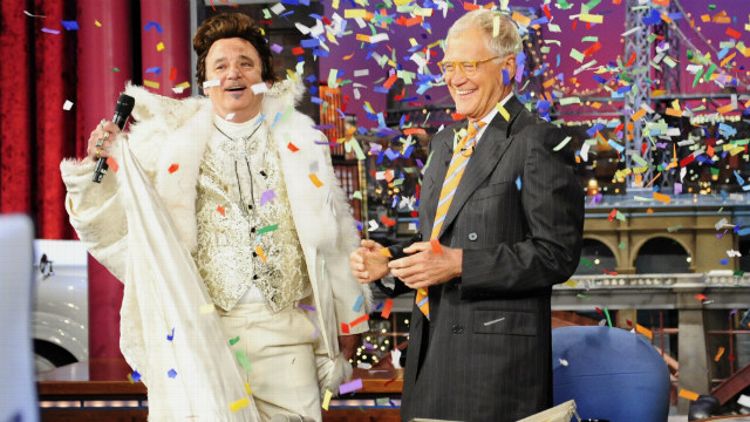 Last night marked David Letterman’s 20th anniversary behind the Late Show desk. (Well, technically tonight is the 20th anniversary, but everyone knows Dave doesn’t work on Fridays.) And Bill Murray was there to help him celebrate, just as he always seems to be when there are milestones to note. It was Murray who was Letterman’s first guest on Late Night 31 years ago, and he was the first guest on the Late Show in 1993. Murray and Letterman are old foils (and, one has to imagine, friends) and whenever they get together the air crackles with the sort of chummy camaraderie that only exists between people who respect each other — and who are used to being squeezed into professional situations where that’s not necessarily the case.

From answering OnStar calls live on air to Dumpster-diving in Times Square, the Bill and Dave show is always appointment viewing, mainly because Murray never arrives without some highly considered shtick. Last night was no exception: Murray swanned onto set dressed as Liberace, unveiled a Photoshopped mural of himself above the Ed Sullivan Theater, and serenaded the host with a seizurey rendition of “I Will Always Love You.” But the best parts between these two aren’t so much the big concepts as they are the smaller moments. Last night, I loved the way each man repeatedly had to pause to allow for genuine laughter to subside, the way the mere presence of the other reduced two 60-year-old professionals to twentysomethings trying to impress each other in their first improv class. Yet as wonderful as it all was — “My heart has now taken flight,” deadpanned Dave — the bit also felt a little autumnal. Twenty years of talk show hosting used to be a bigger deal — prime-time tributes have been cobbled together for less — but this winking, low-key reunion felt apt. Aside from the occasional special guest or sex scandal, Letterman has been on autopilot for years now, his trademark sarcasm occasionally curdling into misanthropy or just wifting away into outright boredom. His legacy is secure: Other than Carson, he’s still the best to have ever done it. It’s just that he barely does it at all anymore.

Letterman is widely presumed to be stepping down at the end of his contract in 2014, the same year that Jimmy Fallon will finally slay the Gorgon of Burbank and ascend to the Tonight Show throne. With Jimmy Kimmel a few months into his head start, the long-promised sea change at 11:30 is almost upon us. After last night, I realized that what I’ll miss most after Letterman’s retirement isn’t the Top Ten lists or the pencil throwing or, to be honest, very much of Dave’s familiar shtick. What I’ll miss is the history. All the greats not only had their favorite guests, they had years and years of backstory and back-and-forthing with them. Watching Johnny chat with Albert Brooks or Joan Rivers (before the falling-out) felt nothing at all like promotion. It was like watching a single dinner conversation play out over a lifetime. And, like a polite person invited to dinner, these upper-echelon guests never arrived empty-handed or unprepared.

These days, Letterman has Murray and, to a lesser extent, people like Tina Fey and Julia Roberts and Howard Stern — intelligent humans who get Dave to drop the mask, toss away the note cards, and welcome someone else into his joke. Conan O’Brien has a comparable sort of escalating, Jenga-game rapport with Will Ferrell and Tracy Morgan, and Kimmel is cultivating a similar thing with his nemesis, Matt Damon. (Jay Leno is basically Leno to everyone. Has anyone ever been on our televisions longer and shared less of himself in the process?) But will any one of the next generation of hosts still be seated behind desks in 20 years? How about 10? The contemporary trend in network talk shows is to put an emphasis on the show at the expense of the talk. (Interesting people discussing smart things — or vice versa — has now been banished to the nichier margins of cable like Bill Maher or Stephen Colbert.)

Fallon’s brand of crowd-hyping razzle-dazzle has the perfect counterpart in Justin Timberlake — but those two visibly sweat for every ounce of joy they create. What happens when they can no longer do the hustle and are forced to just riff instead? I like Fallon a lot, and no one tries harder. But watching Letterman’s low-key goofing with Murray last night was a reminder that for the true greats — be they late night hosts or Jedi masters — there’s no need for trying. There’s only doing. And there are only a few months of that mastery still to come.