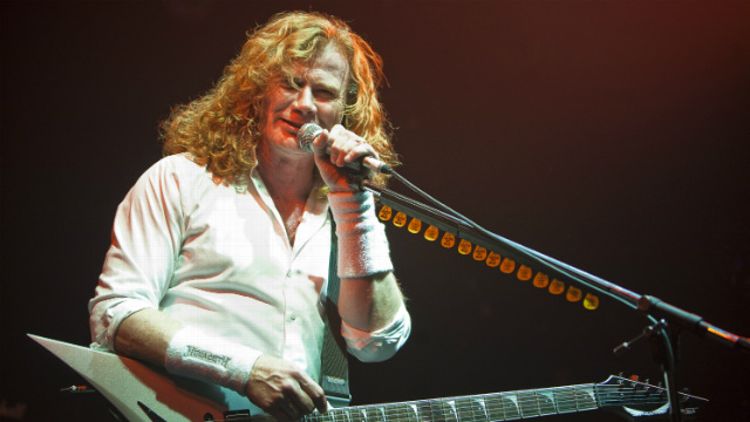 In music history, Megadeth front man Dave Mustaine will go down as one of the founding legends of thrash metal; in pop-culture history, he’ll be remembered for writing “Peace Sells … But Who’s Buying?,” whose knotty bass-solo intro served as the bumper music for MTV News throughout the ’80s and ’90s, and for his sad-sack cameo in Some Kind of Monster, in which he accuses his “little Danish friend” Lars Ulrich of ruining his life in 1982 by kicking him out of Metallica for drinking too much.

But on August 7, onstage in Singapore, he added a new wrinkle to his legacy. In a video shot and posted to YouTube by a fan (“Dave Rules! Sorry for this shaky video”) that was picked up a week later by the metal news site Blabbermouth.net, Mustaine pauses between songs to chastise a fan for chucking a Chuck Taylor in his general direction (“This stage is holy, what’s wrong with you?”), talks a little bit about the weather, then accuses the President of the United States of masterminding recent massacres at a movie theater in Aurora, Colorado, and a Sikh temple in Oak Creek, Wisconsin.

“My President” — here he mimes making himself barf, like all serious speakers-of-truth-to-power do from time to time — “is trying to pass a gun ban, so he’s staging all of these murders, like the Fast and Furious thing down at the border, and Aurora, Colorado, all the people that were killed there. And now, the beautiful people at the Sikh temple. [pause] God … I don’t know where I’m going to live if America keeps going the way it’s going because it looks like it’s turning into Nazi America.”

Anyway, Singapore, are you ready to rock?

Mustaine has lately become tight bros with right-wing conspiracy-theorist radio host Alex Jones; in an interview posted on Jones’s website in July, he described himself as “disgusted” with Obama, while Jones described his friend Mustaine as “quite literally the kind of guy who opens doors for old ladies.”

Blabbermouth.net has a partial transcript, although the full version is worth a listen, if only so you can hear how audibly aflutter Jones becomes in Mustaine’s presence. It’s a real lovefest, except for the part that’s a hatefest. Here’s Dave, to Jones, regarding Obama: “Why hasn’t somebody moved to impeach this man? With all of the proof about his birth certificate being fake. And you see the signs in Kenya that say, ‘The birthplace of Barack Obama.’ Hello?! C’mon, guys. How stupid are we right now?”

Seriously, people. Open your eyes and look at these signs that Dave Mustaine says are there!

And here’s Dave on Michelle Obama’s inauguration-day outfit: “[S]he had a black dress on with two red triangles, so she looked like a black widow turned upside down. So there’s gotta be some symbology there. You just don’t wear something like that to some event like that without there being some kind of future message being told.” (Some kind of message to Dave Mustaine, anyway.)

Megadeth were always more “political” than their fellow headbangers, albeit in a fairly abstract, anti-authoritarian/Chaotic Neutral kind of way; they wrote songs like “Holy Wars … the Punishment Due” and “Foreclosure of a Dream” and included Lloyd Bentsen’s infamous debate-stage smackdown of Dan Quayle (“You’re no Jack Kennedy!”) as a between-songs sound bite on 2004’s The System Has Failed. Mustaine even covered the 1992 Democratic Convention for MTV; he’d later tell the American Spectator that during that assignment, he got condescending looks from people like John Kerry and Oliver Stone, even though he “walked around like a respectable American who happens to be in the music business instead of like one of those idiots in a T-shirt that says ‘F–k Our President.'”

But the fact that Mustaine is now kinda-sorta wearing a ‘F–k Our President’ T-shirt (made of words) isn’t a surprise if you’ve been following either his work or his interviews over the last decade or so. On 2007’s United Abombinations, Mustaine laid into Kojo Annan and the U.N.’s controversial oil-for-food program; he’d later explain that as a born-again Christian, he believes the U.N. must fall in order to bring about the events foretold in the Book of Revelation. Oh, and the title track of 2009’s Endgame was inspired by Endgame: Blueprint for Global Enslavement, a 2007 documentary about the Bilderberg Group directed by (everything is connected!) Alex Jones.

Earlier this year, after Mustaine seemingly endorsed Rick Santorum for president in an interview with MusicRadar.com, The Village Voice‘s Michael Tedder compiled a list of Mustaine’s past forays into conservative punditry; the one-world-government-loving pinkos at UltimateGuitar.com put together a similar rundown in April, although their list included a few not-strictly-speaking-political Mustaine-isms, like the time he suggested that starvation in Africa wouldn’t be a problem if African women would just “put a plug in it” and stop having children.

And here the obvious temptation is to suggest that Mustaine, too, should put a plug in it, even if the First and Second Amendments guarantee him the right to continue shooting himself in the foot. But honestly, having actually listened to that Jones interview, I feel bad for him. When he’s not critiquing Michelle Obama’s color story or talking about Megadeth like it’s a small business or a family farm before noting that they’re now represented by “the prestigious CAA agency in Beverly Hills,” he’s talking about being 50, and making out his will, and how he’s not as rich as people think he is (or &#8212 this is implicit &#8212 as rich as he could have been, since he could have been the guitarist in Metallica, whose eponymous fifth record is still the biggest-selling album of the SoundScan era).

“For me, when you take out 5 percent for the business manager, 15 percent for the personal manager, 10 percent for the agent and 45 percent for taxes, what’s left for Dave? And people think, ‘Oh, Dave is a millionaire.’ No, Dave isn’t. Dave’s an American that’s getting plowed by the government.” Dave is, in other words, a 50-year-old white guy who’s looking for something/anything on which to pin his free-floating sense of despair and disenfranchisement; he’s as much the target audience for conspiracy theories of the Obama-equals-Voldemort variety as Beavis was the target audience for Countdown to Extinction. It’s hard to even object to it as political discourse because the place it comes from is so personal, and has so little to do with actual politics. When he critiques Obama’s supposed wealth-redistribution agenda by saying that “Megadeth won’t be able to tour anymore after all these things he’s planning to do to me happen,” the key words are “to me.”