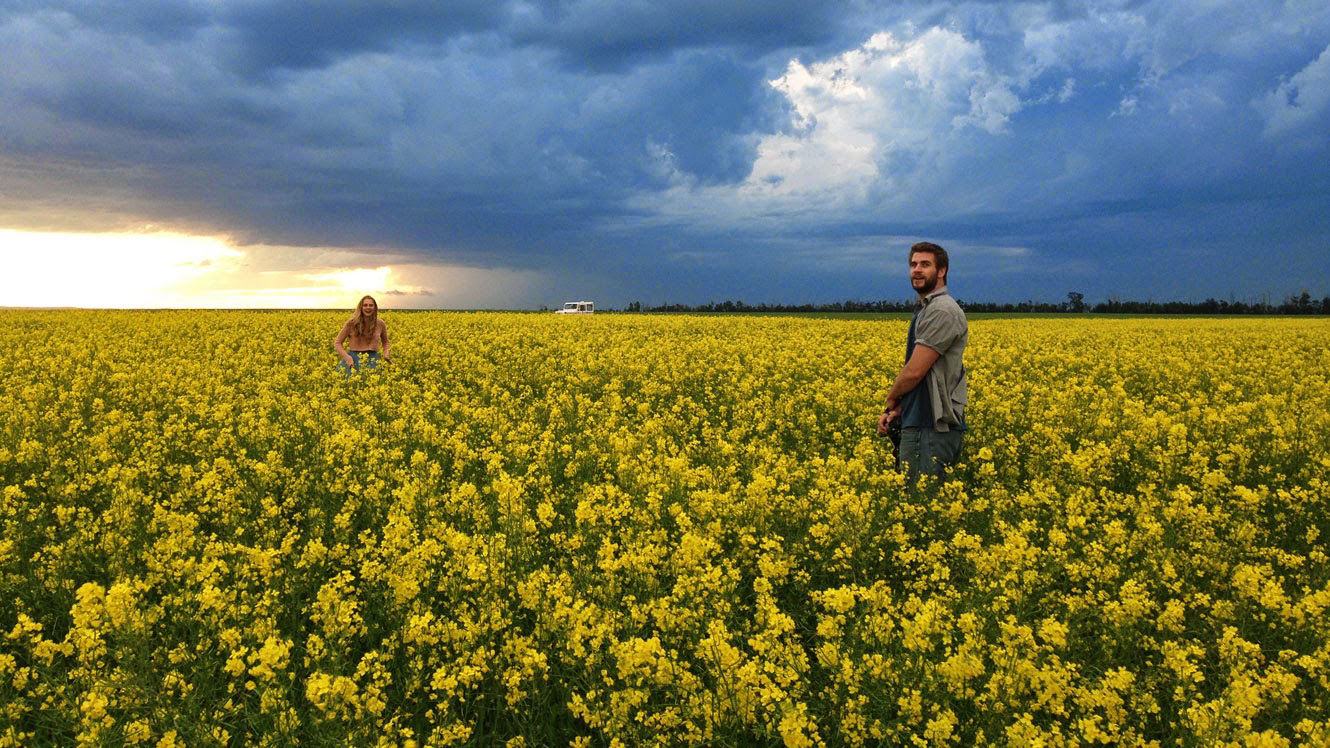 But what if this movie in question, should you separate it from that outstanding trio, would float away without much holding it down? Then you have Cut Bank, a supremely illustrative example of the straight-razor-to-the-neck-thin margin for error available to small-town indie thrillers. As Blue Ruin, The Guest, and Cold in July have shown over the past year or so, when you’re trying to stand out from movies that share many of the same influences, plot beats, and visual language, the most reliable way to do so is with performances that can’t be ignored.

Directed by TV helmer Matt Shakman, from Roberto Patino’s 2009 Black List script, Cut Bank is about a kid in Cut Bank, Montana, played by Liam Hemsworth, who films someone being murdered and stands to collect a reward for it. Shockingly enough, things don’t go smoothly on that front, and the plot rapidly absorbs the mailman (Bruce Dern), the town’s sheriff (John Malkovich), a Unabomber-esque recluse (Michael Stuhlbarg), a guy named Big Stan (Billy Bob Thornton), and a postal inspector from D.C. (Oliver Platt), mixing them into a little noir stew that always seems just on the edge of boiling.

Despite those shiny credentials, Cut Bank struggles on the creative side. The plot twists are telegraphed and the screenplay often achingly rough. Where Rian Johnson’s genre masterpiece Brick showed how dazzling neo-noir dialogue can be when written with true ingenuity, Cut Bank is the other side of the kitschy coin; as miscast as Hemsworth is, I’m not sure there’s a man on earth who could sell the line, “And here you are, off in the land of nod with the jazzy playing, beer cans all about.” And Shakman, whose credits include work on the TV version of Fargo, It’s Always Sunny in Philadelphia, and an episode of Mad Men, isn’t quite willing or able to portray the brutality the script calls for. Next to something like last year’s brilliant Blue Ruin, an obvious genre analogue, Cut Bank looks sanitized, clumsy, and childish.

But there’s a reason A24 — which puts out 75 percent of the good movies released these days — has Cut Bank on its slate. And it isn’t Platt, who peacocks like he’s in an episode of Suits, or Thornton, who appears profoundly and contentedly sedated. It’s Dern, Malkovich, and Stuhlbarg — and, to their credit, Shakman and his cinematographer, Ben Richardson, know when to get out of those actors’ ways.

The first great moment in Cut Bank comes when Malkovich’s sheriff visits the home of Big Stan, who is also the father of Hemsworth’s character’s girlfriend, to watch the murder tape. In the great tradition of overwhelmed small-town law enforcement — including but not limited to serial-crier Deputy Andy Brennan in Twin Peaks, another influence — the sheriff vomits after he sees the footage of the murder. As he’s sitting on the couch, waiting, anticipating the gunshot, Malkovich looks at the screen, twitches, casts his eyes away, looks back, then looks away again, each time accentuating the sense of dread.

When the gun finally goes off, he flinches, and we feel the shot deeper than we did when we saw it with our own eyes; more than anything else, it’s Malkovich’s exaggerated discomfort that creates suspense, and Shakman does strong work in keeping him as the center of attention, resisting the urge to show the murder — which we’ve already seen — once again. The director is placing faith in the audience that, with the movie’s heavy exposition and omniscient perspective, we don’t much otherwise get. Although Hemsworth’s Dwayne McLaren is the ostensible protagonist, the weaknesses in that pairing of character and actor mean Malkovich becomes the emotional and moral center, and he has no trouble supporting the weight.

Stuhlbarg is by far the most interesting part of Cut Bank. As Derby Milton, he wears glasses thicker than bulletproof glass, has fingernails that look like they were painted with dirt, and stutters with cartoonish consistency. But he still gives the character a menace that’s less deranged serial killer and more hyper-competent survivalist. In the script’s most effective bit of characterization, everyone who greets Derby leads with “I thought you were dead,” and Stuhlbarg keeps responding with a nonresponse, as though the question is so stupid and uninteresting that he can’t be bothered to consider it.

Midway between Malkovich and Stuhlbarg is Dern, his hair still Nebraska crazy and his old age worn like a badge of honor. He functions as Cut Bank’s comic relief. Early on, making his mail route, he manages to spy on cheerleaders, cuss out a bunch of kids, and throw an old woman’s pie in the garbage, all in about 90 seconds of screen time. To say much more about his role would be to give away a crucial plot point, and though I wouldn’t say that confusion lasts very long, I’ll respect spoiler etiquette nonetheless. Let’s just say that Dern makes highly efficient use of his burn in what is, if you can believe it, his first big-screen role since getting that Oscar nomination.

Blue Ruin paired a tremendous script and mud-soaked Gothic noir with Macon Blair’s deadly serious lead performance. Dan Stevens carried The Guest on his back, but because it was such an ingeniously designed spin on ’80s action, he was still light enough to fly. Cut Bank is much more like Cold in July: While the scaffolding of the films feel half-finished, great actors can make material much worse than this still worth watching. And while that might sound like faint praise, it’s better than no praise at all.

Madrose Place: What ‘Mad Men’ and ‘Melrose’ Have in Common