Madrose Place: What ‘Mad Men’ and ‘Melrose’ Have in Common 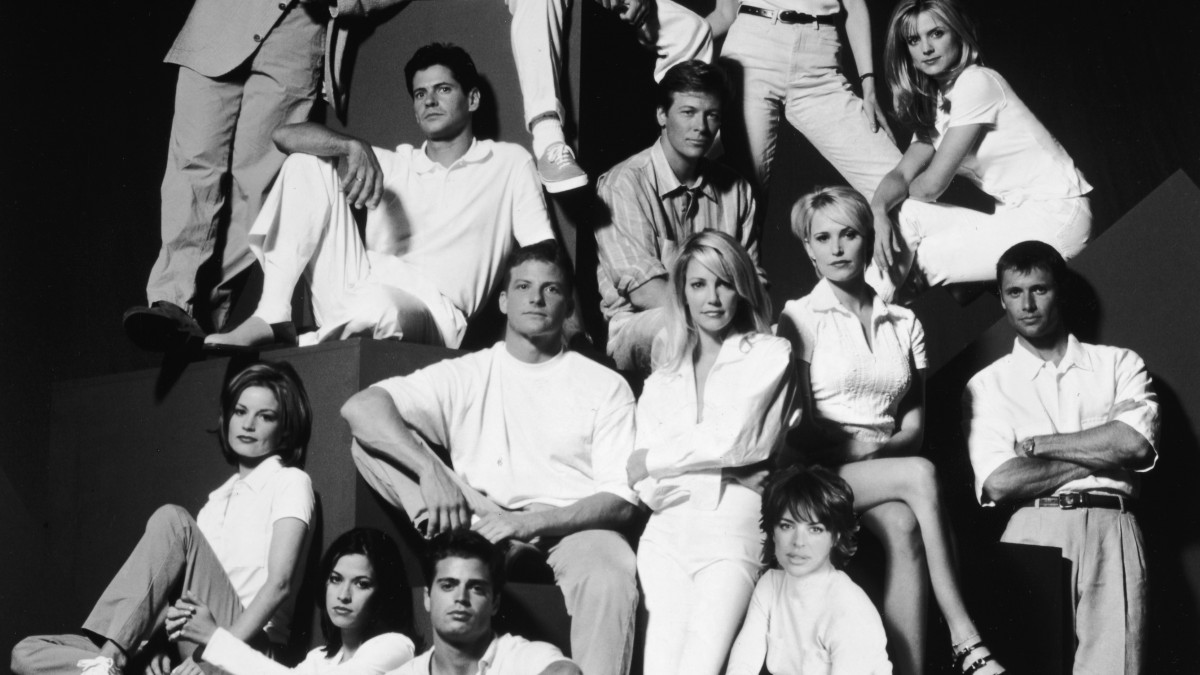 I’ve been thinking a lot lately about one of my favorite TV shows, which explores the shifting sociopolitical mores of a decade, particularly sexism in the workplace, against the backdrop of an ad agency. I am talking, of course, about Melrose Place.

Over the past few months, I’ve been watching Melrose Place with Mad Men in mind. I didn’t start by looking for similarities to Mad Men, but as soon as I started to notice them, I couldn’t stop. There are sexy love triangles, constant drinking, genuinely shocking moments, and episodes centered on pitching ad campaigns. I started conspiracy theorizing that Melrose Place is actually a sequel/prequel to Mad Men. I’m not going to lie: This theory is mostly based on the fact that Andrew Shue’s character, Billy, has the last name Campbell, and let’s just say I was in a state of mind in which I feel particularly attuned toward unifying theories of television. But seriously, a lot of the show takes place at an ad agency named D&D, and at some point I just decided the D stood for Draper. (The other D also stands for Draper: Sally Draper.) 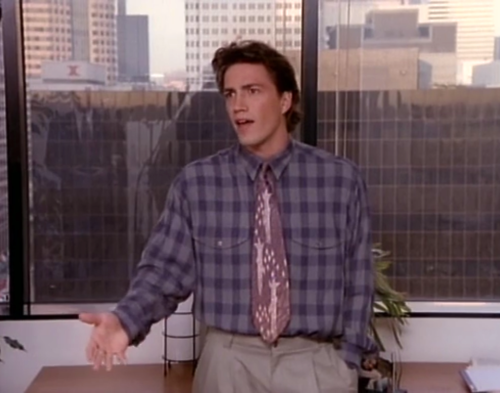 Melrose Place is about a group of hot twentysomethings who live in the titular apartment building, but it’s also about ambitious people trying to advance their careers and established people attempting to hold on to their success at any cost. Dr. Michael Mancini is a louche ’90s descendant of cads like Roger Sterling and Don Draper, guys who are physically incapable of staying faithful. In a lot of ways, the ’90s were the sequel to the ’60s — a progressive attempt to reboot a certain strain of idealism after the apathy of the ’70s and the yuppie cynicism of the ’80s. In Season 4 of Melrose, Sydney even gets a mod ’90s-’60s makeover and throws a ’60s-themed party.1 But as in Mad Men, the valleys between people’s intentions and actual actions, their dream selves and real selves, are wide.

Watching Melrose now, I see it a little differently than I did during the show’s run. For instance, it’s a show about work, and the exploration of work-life balance is more nuanced than I remembered. All I really recalled were the micro-miniskirted pastel power suits and catfights that led to people getting pushed into the apartment complex pool.

Both Melrose Place and Mad Men are wildly successful, trendsetting nighttime soaps that self-reflexively comment on soap operas as a form. Mad Men balances its big moments with smaller, quieter ones in a way that feels more like real life than a traditional soap, subverting our expectations of the narrative in a way that is still extremely satisfying. Melrose owns its batshit-ness in a way that overshadows any minor quibbles about plot holes or objections to the fact that every character ends up undergoing several major traumas. Both shows always surprise me with the directions they choose to pursue. 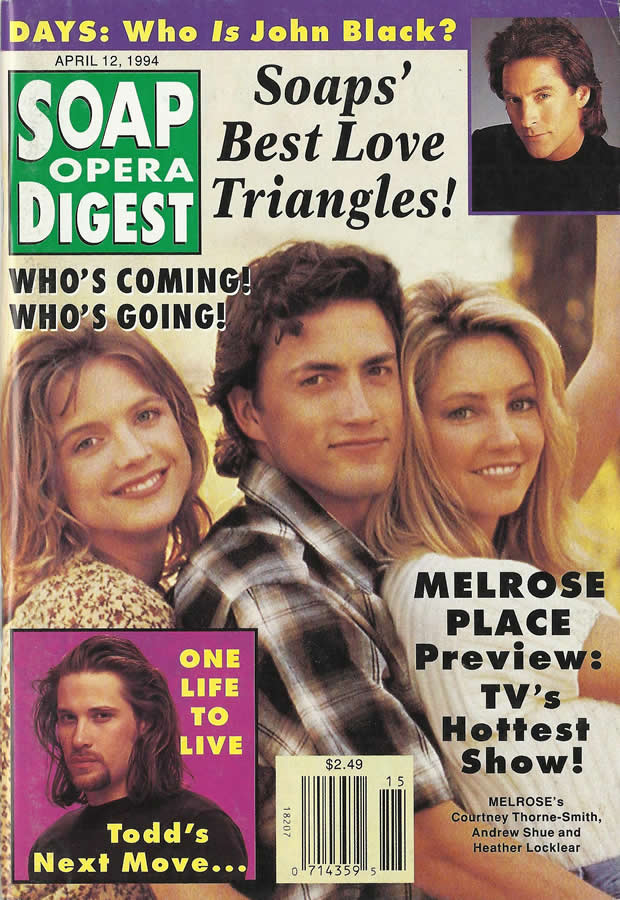 TV networks love soaps because they’re relatively cheap to make. Actors love working on soaps because they provide a regular gig with a steady paycheck and a devoted, vocal fan base, but actors also dislike working on them because nobody takes soaps seriously critically. Soaps are treated differently from the rest of TV; they even have their own awards show. Unless they’re on at NIGHT. TV theorists argue that daytime soaps are critically marginalized because of whom they are designed to appeal to (housewives) and what they portray (the emotional inner lives of people, particularly women). They’re denigrated for being non-naturalistic, exaggerated and stylized, and often sadistic — and, mostly, for being shot on video, giving them a cheap, hazy-looking quality that some people hate but I love. Soap opera plots grow increasingly crazy because they are purposely escapist for women trapped at home. They hold a weird mirror up to dark female fears: abduction, insanity, and exploitation show up on soaps as regularly as amnesia and faked deaths. Some of the tropes of soaps are so well established that they feel as eternal as Greek tragedies.

Some of the biggest historic soaps, radio holdovers that helped build early television, are gone now. Guiding Light, As the World Turns, All My Children, and One Life to Live are no more. But the nighttime soap flourishes: Empire is the biggest hit in years. Ensemble shows are a great way to tell a lot of stories at once, and both Mad Men and Melrose Place make full use of their cast — or almost do. Frustratingly, both shows sometimes introduce characters belonging to marginalized groups who themselves are marginalized by the narratives of the shows, unfairly confined to the sideline.

The shows are built around watercooler moments — spoiler alerts ahoy: Kimberly’s scar! The lawnmower! But they are also character studies that unfold over a long period, following characters who are both extremely self-aware and nightmarishly resistant to change. The reason that Melrose Place, like Mad Men, can both embrace and transcend its soapiness is that it’s funny as fuck, while most soaps tend to play everything super straight. Granted, the tones of the two shows are not exactly the same. Mad Men is a subtle melodrama, and Melrose Place is a campy riot. They’re both wildly entertaining, showing us ugly truths about human behavior but seducing us anyway.

Amanda (Heather Locklear) is the Don Draper character2 to Allison’s (Courtney Thorne-Smith) Peggy Olson, a mentor who is sometimes a rival. When Allison starts out at D&D, she wants to be like Amanda — who, to her, epitomizes success — until she finally does take Amanda’s place and learns that it’s an empty victory. Allison still isn’t happy despite the increased salary and prestige — which is more or less the arc traced by Don and Peggy over the years. On Melrose Place, the dynamic is even more difficult because Amanda starts trying to creep on Allison’s boyfriend Billy, putting Allison in an impossible position, much like the one Roger Sterling put Don in during Season 1 when he hit on Betty Draper at a dinner party. People want to keep work at work and home at home, but it’s never as simple as that. 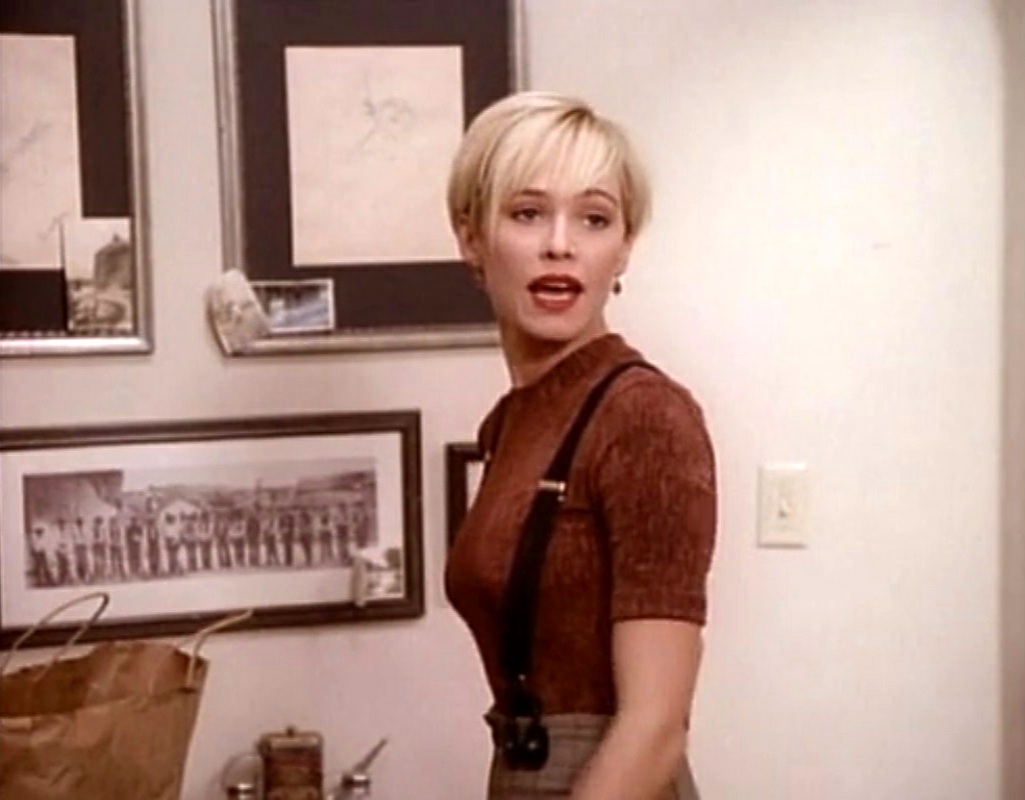 All the women on Melrose Place are descendants of Mad Men’s Peggy, trying to carve out their niche in the work world while also keeping up with their male peers in bed. Sexually, the girls of Melrose follow after Joan: If they want a man, they go out and get him. One thing complicating the potential sisterhood between the ladies of Melrose is that they tend to want the same men at the same time, which becomes an issue of pride. The good girl who steps aside gets boxed out by the bad girl, who takes what she wants until the good girl eventually gets angry and flips. As on Mad Men, the bitches of Melrose are never just bitches; they’re motivated to be bitches by other injustices — some of them personal and petty, others based in larger institutionalized problems.

Dr. Michael Mancini is just an asshole, but there’s something gleeful about watching him exercise his right to be an asshole, flexing his privilege to its furthest extent. He’s a douchebag, but at least he’s consistent! Billy Campbell has an internal backstory, but in my mind he is the son of Pete and that real estate agent he’s going with now. He is a different kind of douchebag: the unstoppably passive kind. Billy is a very ’90s archetype of the beta male, in the same way Pete is a ’60s archetype of one. Billy’s problem isn’t anger, though; it’s a lack of it. He starts out as one of the good guys and gradually becomes incredibly frustrating because he just lets stuff happen to him every time. If a woman tries to seduce him, he gets seduced. And so he ends up getting seduced into some really dumb situations — and eventually you come to the conclusion that it’s totally his own fault. Billy initially works at a magazine before ending up at D&D (everyone ends up working for D&D in some capacity). Shue’s soccer-playing puppy dog charm goes a long way. Everyone had a crush on a Shue sibling (or both!) at some point during the ’90s. They’re just so darn likable! 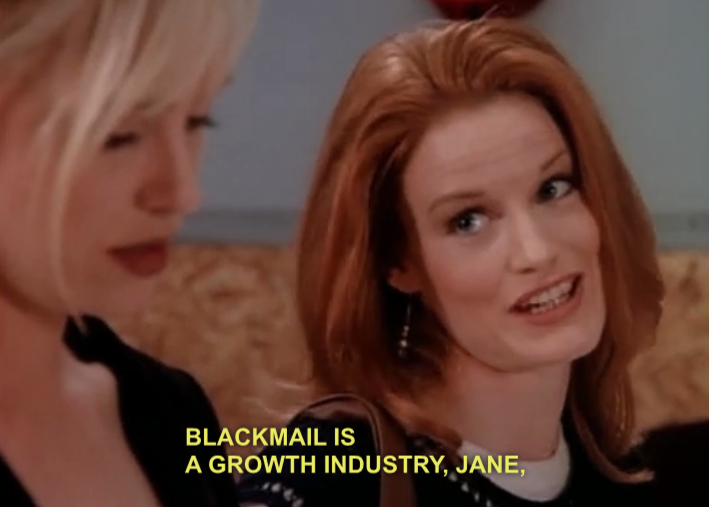 Dr. Kimberly Shaw and Sydney Andrews are subtypes of the Joan Holloway archetype of the cunning redhead, although Joan has never done anything that verges on the insanity of Kimberly or Sydney on their most sane day. For the same reason it can be fun to watch Michael or Don booze and cheat their way through life, it’s satisfying to watch Kimberly and Sydney do crazy things to achieve their goals. Their aim is often to win Michael, often from each other. By Season 4, they have both spent time in insane asylums, but nonetheless Kimberly ends up acting as Sydney’s therapist. However different their crazy ways are, they are both innately evil and selfish. They respect one another for that. Both shows have characters who are recognizable as types but three-dimensional as characters and flawed human beings. Even the most unlikable character has moments of likability, and vice versa.

My love of Melrose Place is inextricably linked to nostalgia for my childhood. I lived on a street off the then-bustling Melrose for the first six years of my life, and some of my most vivid young memories take place there, such as eating lemon sorbet3 at Double Rainbow Ice Cream and then walking with my parents and brother to the Soap Plant next door. There is footage of the old Soap Plant in the opening credits of Melrose Place, and every time I see it, a patchouli-scented wind blows me back into the past. Melrose uses different takes from the same B-roll footage of early ’90s Melrose Avenue for the opening shots of every episode, and it always sends me into a weird Proustian reverie about Hollywood in the late ’80s and early ’90s. I feel myself becoming a million years old as I go on about how the Melrose shopping district was once the coolest area in Los Angeles to hang out in, filled with hip Thai restaurants with neon squiggles on the wall and fashionable boutiques next to stores selling stripper wear and offering piercings and tattoos. I thought adulthood was like Melrose Place, and I looked forward to nothing more than being old enough to live in a Day of the Locust Art Deco apartment complex surrounded by sexy people and drama (other than “will I be able to pay rent this month?”). I still feel that way, even though I am now an adult. Watching the TV of my youth to recapture that feeling? That’s my Kodak Carousel.