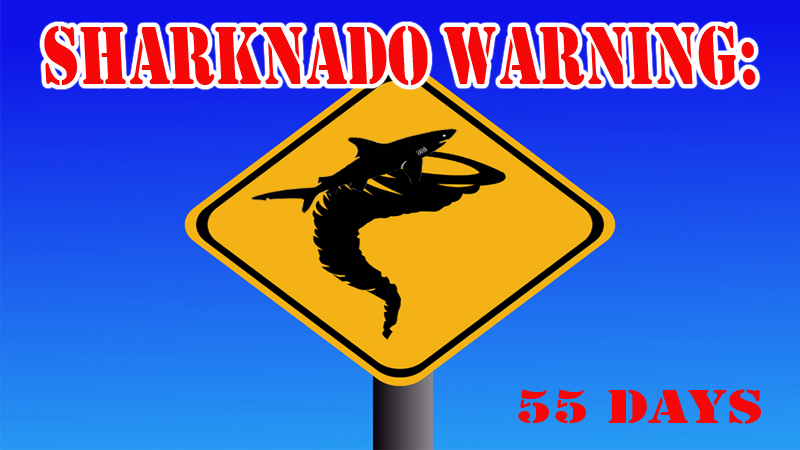 We’re 55 days out from the cable cinema event of the summer, and the gods have seen fit to gift us with a Sharknado 2 teaser. In our continuing efforts to bring you exhaustive coverage of this uniquely American art form, analysis follows:

00:06 Taking a lesson (since they’ve already lifted entire character names) from Jaws, whoever cut this trailer seems keenly aware that tension can be heightened if you don’t show the monster right away, so we’re treated to a montage of awestruck-frozen actors staring at something off camera. All that’s really missing here is a portly cop. These kinds of movies are never complete without a good-ole-boy-lookin’ lawman goggling up at something while tipping back his hat. Blink and you’ll miss Mark “MARTIN BRODY” McGrath and Vivica A. Fox on a subway platform.

00:09 Tara Reid discard rumors dispelled, and she seems to have scored a stylist upgrade for the sequel. Eyeliner here is just immaculate.

00:10 “It’s happening again,” says Fin, and is he talking about the Sharknado weather pattern or the Sharknado cultural phenomenon? Both, the filmmakers themselves would surely be the first to tell you.

00:11 Right, so never mind about not showing the sharks. It’s launching itself at the camera! Fin brandishes a chain saw atop a fire truck! Was he allowed to carry that onto the plane? Water rising over the tops of cars in the streets of New York! Is this Day After Tomorrow canon? Are we about to see a flash freeze, followed by an invasion of escaped wolves from the Central Park Zoo? Find out in the surely gestating follow-up, The Day After That: Sharknado vs. Wolfphoon.

00:15 It’s right about here, as a tossed shark meets a grisly demise at the end of a bladed weapon, that we realize this franchise has yet to really explore the idea of shooting the sharks out of the air like so many cartilaginous clay pigeons. Perhaps that is best saved for the threequel.

00:18 The Statue of Liberty’s crown and torch are glimpsed in a final whirl. TRIVIA: There are seven spikes in the Statue of Liberty’s crown, and seven seas. At least one shark is going to end up impaled here, right? And in that moment, will we summon the humanity to remember that the sharks are the real victims here? They’re a huddled mass yearning to breathe free in their own right, only they can’t, because they are not underwater. They’ve been torn from their homes and tossed into a hostile environment by forces entirely beyond their control. We’ll crave the occasionally conservation-focused content of Actual Shark Week after this.

'Game of Thrones' Precap: Onward to the Wall!