Countdown 2 Sharknado 2: Your 22-Day Warning, With an All-New Trailer 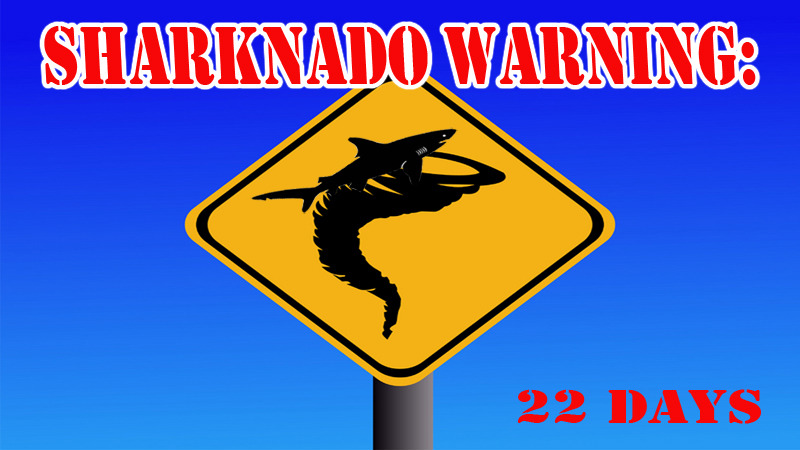 The new Sharknado 2: The Second One trailer could not have come at a better time. We could really use a refresher course on what is and is not a shark “attack.”

THIS is an idiot fisherman causing harm to a swimmer by his idiot actions.

THIS is a goddamn shark attack:

00:03 “There’s a cinematic event that changes everything.” It certainly has changed the flow of our workday.

00:12 SyFy’s “In a World … ” Guy takes us to Matt Lauer and Al Roker, and even though Lauer gets the line, all this does is get us genuinely, unashamedly psyched for the barrage of Roker-delivered weather puns that HAD BETTER BE IN THE FINISHED PRODUCT. If there’s a god under the sea, hurling sharks up into waterspouts that become geographically implausible tornadoes, may s/he see fit to grant Anne Hathaway a cameo, preferrably while exiting a cab. May Lauer see her, and gird his leering loins. And may a shark emerge from beneath Ms. Hathaway’s tasteful pencil skirt and bite him in the nards. We’re just here to help.

00:31 — briefly electrocuted in a manner that seems conspicuously designed to invoke the climax of Return of the Jedi, in that the electricity is purple and his face is a snarling rictus of pain.

00:35 Grizzled cabdriver: “You reckon there’s gonna be one of those shark storms here?”

00:38 Blink and you’ll miss Andy Dick as either a cop or a stripper-cop. It’s Sharknado. Maybe he’s both. It’s Andy Dick. Maybe he just wandered onto the set in full police uniform and they kept the cameras rolling. You don’t know.

00:39 We do not know enough about the New York Baseball Mets to fully appreciate all these shots of Citi Field (these fans are so scared it’s like Dice-K is pitching again? Anybody?), but are fully on board with the idea of running away from a baseball stadium, whether or not it is filled with torrents of water and whirling cartilaginous fish.

00:40  Based on the timbre of this scream, Tara Reid is either being menaced by a shark or is stuck on a malfunctioning Tilt-a-Whirl. The latter would be a nice callback to last summer’s rolling Santa Monica Ferris wheel. 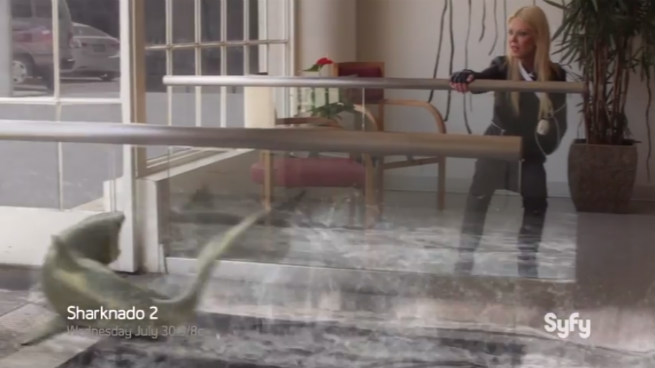 00:45 HOLD IT RIGHT THERE for a shot of a shark turning to Reid … in recognition? She narrates, from a hospital bed: “It’s like it knew who I was.” This is a kitchen sink of a sequel. Jaws: The Revenge is welcome. All are welcome.

00:48 For those of you playing Sharknado Improvised Weapon Bingo at home, please color in your “Fin with a pizza peel” squares. Sharks can’t eat folded slices, because they have no hands.

01:11  The tagline of the summer, and a valuable piece of life advice in general: “Forget the umbrella. Grab a chain saw.”

01:24  Fin has been atop this car for so long that it’s time for legitimate concern he’s gonna go out like Sam Jackson in Deep Blue Sea.

01:29  Not only is Mark McGrath, again, named MARTIN BRODY in this movie, he’s also here to take your very most obvious retort to this movie right out of your mouth.

01:36  Don’t do this, movie. Don’t give New York the ammunition of “Even the sharknados are tougher in New York.” The belief that living someplace where weather can kill you faster than in another place makes you a hardier, more American American is one of this country’s greatest shames.

01:39  You know, you try to inspire people with a nice poem, only to find your own HEAD homeless and tempest-tossed. Ain’t that always the way. 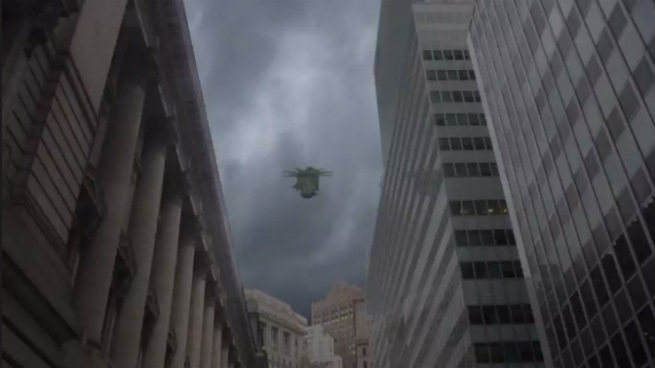