Conan O’Brien Didn’t Stop: Checking In on the Post-Buzz Era of TBS’s Flagship 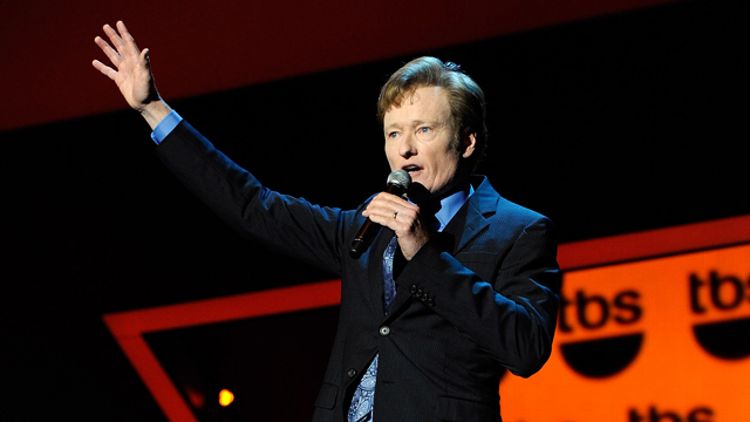 Last week, apropos of nearly nothing, The Hollywood Reporter ran a fawning cover story on Conan O’Brien. “REVENGE OF THE NERD” blared the headline, while the article itself gushed over the star’s “relaxed and happy” appearance and how, two and a half years removed from his debacle at NBC, the star has “no regrets.” Ratings for Conan, O’Brien’s TBS show, while never good, have rebounded of late, from losing-to-Chelsea Lately embarrassment to Colbert-trailing near-respectability. But the bulk of the discussion regarding Conan’s place in the late-night firmament uses words that make the show seem less like a success and more like the fevered, PowerPoint dreams of an overcaffeinated marketer. The story, like most written about O’Brien these days, points to “new viewing platforms” and recent accomplishments “invading the digital space” — buzzy nonsense that suggests a multi-million-dollar talk show ought to have the same long-term goals as Keyboard Cat — and the word “Twitter” is tossed around liberally, as if its very invocation can ward off the evil spirits of viewer stagnation and basic cable irrelevance. “If success were only about ratings, we’d just run Westerns all the time,”  TBS president Steve Koonin is quoted as saying, an oddly backhanded defense of his decision to extend O’Brien’s contract through 2014.

It’s a strange predicament for the once-robust Team Coco. Two years after stomping out of Burbank with both his dignity and a surprisingly populist wind at his back, O’Brien has found himself reduced to little more than a figurehead for a publicly scrutinized paradigm shift. He makes news when he pokes fun at Jay Leno’s car collection — as he recently did on fellow anti-chinophile David Letterman’s show — or when longtime pals like Will Ferrell drop by bearing Burgundian tidings, but is otherwise absent from the pop culture conversation, online or off. With a median age of 35, Conan may boast the youngest average audience in all of late night, but to date there’s little evidence that these not-quite-kids are moving the needle in any of the ways Steve Koonin is banking on, be it sharing videos on Facebook, Instagramming their macramé Pimpbots, or merely swingin’ on the flippety flop. Going by the Hollywood Reporter story, O’Brien is actually lapping his rivals via nontraditional means, building a lasting multimedia empire 140 sponsored characters at a time. But after a week spent experiencing Conan the one way TBS’s press releases fail to prioritize — actually watching it — it’s painfully clear how difficult a task the network is attempting. They may crow about breaking the mold, but O’Brien is going about it in the most old-fashioned way imaginable.

The truth is, after being inundated with visions of just what a truly “pro-digital, post-ratings” show aimed exclusively at “engaged” young people might look like, it’s hard not to be disappointed with the reality of Conan. I was prepared for an uninterrupted blast of cutting-edge crazy, a 60-minute deadmau5 remix of an Odd Future GIF. What I got instead was a talk show, and a particularly uninspired one at that. Conan follows the same six-act format as O’Brien’s aborted Tonight Show, from the creaky monologue to the final bows of a minor band or lesser comedian. It seems strange to think that O’Brien would cling to all of the hoary chat show trappings that never suited him all that well in the first place, particularly when given the opportunity to create something with, as Turner’s head of programming Michael Wright put it, “no one looking over your shoulder.” But there he is, night after night, soft-shoeing groaners about Mitt Romney, Al Gore, and the Dalai Lama (a strangely frequent target).

Rather than underplay the monologue — a strategy employed to good effect by Jimmy Fallon, O’Brien’s successor at Late Night and clear superior in the realm of viral videos — O’Brien seems to have dug in, stretching the segment to eight or nine minutes of forced cheer and Eubanksian courtesy chuckles from the lectern-bound Andy Richter. This rarely daunts the reliably ebullient, impressively tattooed studio audience, who cheer their hero as if he were still rooftop crusading against corporate pessimism, not moments away from introducing Howie Mandel. “You people act like you’ve never seen one of these shows before!” O’Brien stammered last week, after being greeted with yet another standing ovation. If anything speaks to the truth behind TBS’s marketing, it’s this crowd, which, in a rarity for staid Burbank, never fails to resemble spillover from the Great GoogaMooga. Yet it’s possible to imagine these raucous post-teenagers doing more harm than good, insulating the isolated O’Brien with enthusiasm, content to watch him string-dance his way to mediocrity.

It didn’t have to be this way. Even removed as he is from the A-list talent bookers and higher suit budgets of his network days, O’Brien remains an affable presence and a brilliantly quick comedic performer. The unpredictable sparking of a random bit still sends a loopy charge through the entire broadcast, as when a gag about terrible sports mascots devolved into Richter firing baby doll-basketball hybrids out of a cannon. And when a guest catches O’Brien’s interest or, better yet, comes prepared with the funny — Marc Maron digressing about auto-erotic asphyxiation, say, or Tracy Morgan being professionally Tracy Morgan (“I wanna do karate and make babies!”) — the ginger giant is able to rise to the occasion. But welcoming Brooklyn Decker in a leather dress only to ask her about her airplane reading is the sort of low-risk, lower-interest compromising that would have elicited yawns even in Jeff Zucker’s executive wine dungeon. Much like his snarkier idol Letterman, O’Brien’s absurdist inclusiveness is responsible for an entire generation of comedy — you can see its tendrils all over the broadcast dial, from the maniacally sweet Community to the delightful Happy Endings (a sitcom shepherded by former Late Night head writer Jonathan Groff). Which is what makes O’Brien’s decade-ahead-of-schedule descent into inattentive, Letterman-esque lechery with leggy CW starlets so disheartening.

Far too much of Conan’s airtime is devoted to engaging with the fan base’s youthful vigor like a housebound baby boomer unsure if the kids on his lawn should be encouraged or maced. For every fossilized one-liner about Cher, there’s a pre-taped bit about the “Museum of Old Pop Culture References,” hosted by a reptilian Corbin Bernsen. There’s even a recurring sketch called “Conan’s Video Blog” in which he adopts a lobotomized voice and holds up photos of LOL-worthy animals. It’s neither sly enough to be satire nor silly enough to be funny, and it fills me with sympathy for O’Brien and his staff, who spent years preparing to age their shtick up for Jay Leno’s audience of Oldsmobiles only to find themselves tasked with holding the Pinterest of an entirely new generation.

Still, there’s something respectable about O’Brien’s dogged devotion to a style that’s gone so perilously out of fashion. Despite being hailed as a paragon for niche programming, his unassailable, Carsonian commitment to widescreen entertainment is commendable and occasionally touching. And it’s also unfair to compare him directly to his nimble competition on Comedy Central, who are freed from a lot of the structural malarkey that weighs down Conan both by design and by run time (there’s a lot less room for Nicole Richie’s disquisitions on Punky Brewster in a half-hour format).

But after a week watching The Great Conando pant after nobodies and ding Americans for being overweight, I’ve come to the conclusion that it’s not the lower ratings that should concern TBS. It’s the lowered expectations. By constantly moving the goalposts and pre-apologizing for Conan’s numbers, TBS only reinforces the perception that they’re less interested in the reality of Conan as a talk show than they are in the projected fantasy of it as some sort of web-friendly content farm. (Last week, Vince Vaughn “stopped by” to debut a trailer for his new movie. Yes, the star wattage was nice, but it seemed like an awfully expensive way for TBS to involve itself in something the Internet already does well enough for free, the equivalent of priority-mailing a letter to announce an e-mail you plan on sending in the morning.) Koonin’s hands-off policy and drama-free endorsements (“He’s our Mount Rushmore”) must make for a pleasant change of pace after 17 years among the backstabbing brownshirts at NBC. But it also seems to have stripped O’Brien of his most powerful weapon: his ferocious survival instinct.

Whether he was staving off cancellation rumors with coked-up werewolves or blowing off NBC’s rescheduling plans by blowing their money, O’Brien’s comedy has always worked best when he’s fighting for his life. When the Tonight Show exploded in his face in 2010, O’Brien responded almost immediately by launching the “Legally Prohibited From Being Funny on TV” tour. Part roaring sketch revue, part revival meeting, it was a sweat-soaked celebration of everything he’d tried to preach from behind a succession of wooden desks: that laughter, like music, can be transformative, that cynicism sucks, and that bears, just like any of us, deserve to be pleasured. Now, tasked with little more than delivering a modest number of age-appropriate eyeballs, O’Brien seems both stunted and settled, lavishly rewarded for doing what he loves most for a company that seems to value the end product the least. It’s been well established by now that Conan O’Brien can’t stop. But it seems he’s only transcendent when someone is trying to make him.

This Is Summer TV: Dogs in the City