Community’s Premiere Date Gets Pushed Back, Which Might Actually Be a Good Thing 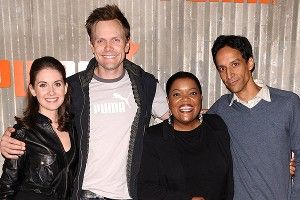 Monday night, NBC announced that Community and Whitney would not be premiering October 19, as previously planned, and instead would be held indefinitely. The statement from NBC: “Given the success we’ve had for the past four weeks — including winning the first week of the season in A18-49 — we’ve decided to continue to concentrate our promotional strength on our new NBC shows that are scheduled Monday through Wednesday and have therefore decided to hold Community and Whitney … Without having to launch these comedies on Friday at this time, we can keep our promotion focused on earlier in the week — plus we will have both comedies in our back pocket if we need to make any schedule changes on those nights. When we have a better idea of viewing patterns in the next few weeks, we will announce new season premieres of Whitney and Community.” Ha ha, more horrible news for the beleaguered Community, right?! Well, maybe not.

See, October 19 is a Friday — television’s death knell night. But now that Community’s temporarily off the schedule, it may well find itself on a normal night of the week. As Vulture’s Josef Adalian postulates, “it seems possible NBC might decide to see how Animal Practice and Up All Night do in the next few weeks. The former show has flatlined on Wednesdays, and if that continues, NBC might be smart to replace it with Whitney, thus creating a multi-cam comedy block on Wednesdays. Likewise, though Up All Night has done okay … NBC might choose to … yes, bring Community back to Thursday nights after all, where it might prove a better fit with either Parks or 30 Rock.” Either NBC is just interested in dumping Community’s body by the side of the road, or it really is trying to figure out the best time to promote and best night to air the damn thing.

And with that, Community’s ratio of “level of analysis” to “number of actual human viewers” rises to ever more comically uneven heights.