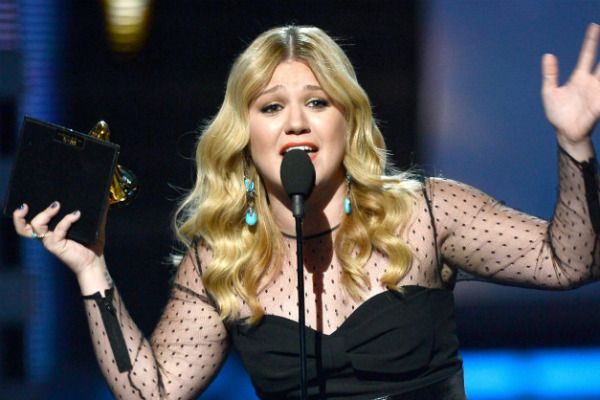 Generally when musicians do battle with their record labels, those labels are represented as faceless monoliths — evil, mean, dumb, and, above all, afraid-of-the-blinding-lights-of-true-art monoliths. Big congratulations are in order, then, to Kelly Clarkson and industry legend Clive Davis for tweaking the paradigm: Eschewing the traditional man vs. corporation delineation, the two are currently embroiled in a nice, feisty, and increasingly personal little Art vs. Commerce tête-à-tête.

It started with this week’s publication of Davis’s new memoir, The Soundtrack of My Life, in which Clive chats a bit about working with Kelly on her smash sophomore album, Breakaway. See, the thing was: the dramatic, teary way Clive remembers it going down? It’s maybe not at all how it actually went down? In response, Clarkson took to the Internet to air it out:

First, he says I burst into “hysterical sobbing” in his office when he demanded Since You Been Gone be on my album. Not true at all. His stories and songs are mixed up. I did want more guitars added to the original demo and Clive did not. Max [Martin], [Dr.] Luke and I still fought for the bigger sound and we prevailed and I couldn’t be more proud of the life of that song. I resent him dampening that song in any way.

But, yes, I did cry in his office once. I cried after I played him a song I had written about my life called “Because of You.” I cried because he hated it and told me verbatim that I was a “sh*tty writer who should be grateful for the gifts that he bestows upon me.” He continued on about how the song didn’t rhyme and how I should just shut up and sing … I continued to fight for the song and the label relented. And it became a worldwide hit. He didn’t include that in the book.

He also goes on to say My December wasn’t successful because I co-penned the album and it didn’t have “pop hits”. Well, first let me say, I’ve co-penned many of my “pop hits.” Secondly, My December went platinum (It sold 20,000 less than All I Ever Wanted which followed My December.) Hardly a huge failure … what’s most interesting about his story is what he leaves out: He doesn’t mention how he stood up in front of his company at a convention and belittled me and my music and completely sabotaged the entire project.

Oh, but then it gets better! In between bouts of furiously refreshing the Amazon Best Sellers page, Clive found the time to shoot back. The takeaway: Kelly must have been mistaken when she says he’s mistaken. And that’s because Clive — wait for it — actually fact-checked this thing. Via no fewer than five people. Billboard points us to his Twitter statement:

As anyone who has read “The Soundtrack of My Life” knows, I think Kelly Clarkson is a tremendous vocal talent and performer … I am truly very sorry that she has decided to take issue with what I know to be an accurate depiction of our time together. Before the book was published, I had every fact checked with five independent individuals who were present on a daily basis throughout it all. The chapter as it is written was thoroughly verified by each and every one of them. I stand by the chapter as written in my book. At the same time I wish, and will always wish, Kelly’s talent and her career to soar to ever new heights.

Now, not to quibble with the journalistic ethics of Mr. Clive Davis or anything, but is it really fact-checking when you call up five sniveling underlings and go, “Kelly cried in my office cause I told her ‘Since U Been Gone’ was a hit, right?” and they go, “Yes, Mr. Davis. That’s exactly how I remember it too”? Ah, not that it really matters who believes whom, as this is already a win for all parties involved: Clive gets to pump up sales numbers for the book, via salacious beef; Kelly gets to come off as the strong, independent woman type she’s been presenting herself as via anthemic breakup jams for a decade.

One more thing: All questions of truthfulness aside, Kelly Clarkson certainly possesses some good-ass stories about working with Clive. With all due respect to Davis’s co-author, top-shelf music writer Anthony DeCurtis, maybe she should have written the book?

The Complicated Emotions of Catfish: The TV Show