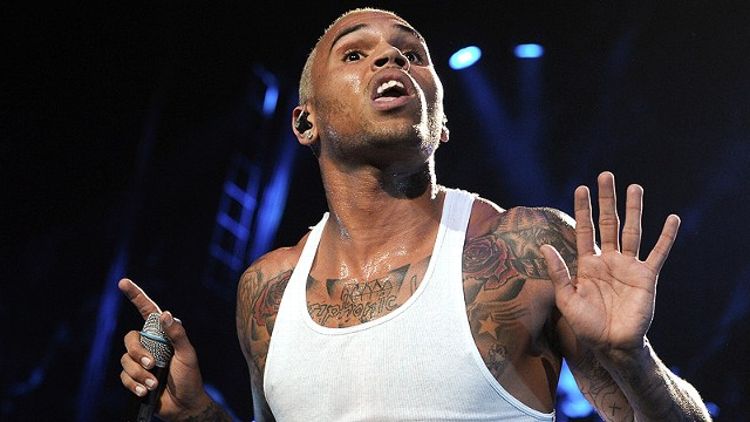 Chris Brown: “Confidently approached an attractive brunette” at a Grammy after-party and said, “Can I get your number? I promise I won’t beat you!” according to the attractive brunette in question. “He and his friends laughed, then one yelled ‘that’s his new line!'” Ha ha ha ha DIE, CHRIS BROWN.

Kim Kardashian and Reggie Bush: Just before Valentine’s Day, “the reality star reconnected with a tall, handsome suitor: ex-boyfriend Reggie Bush.” As they ate brunch “Kim was making googly eyes at him. They were catching up and laughing a lot.” Kim is keeping it secret, since her family disapproves. “In her mind, Reggie’s her great love … but he’s not a good boyfriend. Her family hates to see how upset she gets when it’s over. She’s always devastated and a mess.” But “Reggie is the one who all the other guys get compared to, and the one she runs to when there’s a breakup.” The self-proclaimed “camera-shy” Bush may care for Kim, but “won’t commit to her in the way she needs him to. As much as he loves her, he’s not ready to give up the fabulous life he has as a single guy.” Which might help with Kim’s family’s wish that she just “get back in the game and try meeting new people” — knowing the Kardashians, handsome, athletic, world-famous new people.

Dance Moms: “In last season’s ‘Where Have All the Children Gone?’ a trophy-winning piece about abduction, the troupe simulated being choked and stabbed!”

Misc/Etc: “It’s effortless!” “It reminded me of high school” “best watch out for this table-flipping mom of four” Jennifer Aniston: “I go on the internet and read all about lasers. I call it laser porn.” “great if you feel puffy, dry, or old.” Kelly Ripa: “Deejaying is my secret passion.” “Kim Kardashian and Britney Spears talked about girlie things” “Their friends think they’re sleeping together. But he’s not into commitment.” “She’s turning her rage into creativity” “These A-list women are terrified of her and kiss her ass” “Fergie is the first global ambassador for Wet ‘n Wild cosmetics” “Time stands still for Tom Cruise.” “Things you really want turn out to be the worst thing in the world.”

Rihanna and Chris Brown: “Rihanna just can’t let go of her violent ex.” Three years after the incident where he beat the shit out of her in a car and then never repented, they hung out in her Grammy dressing room. “They spent over five hours together. She said they talked about everything under the sun.” Whether they did more than talk is up for speculation. “Everyone is buzzing that they hooked up. When she came out, she had a coy smile and looked slightly disheveled.” Coy smiles = intercourse. They were at the same club later that week, but Chris brought his girlfriend Karrueche Tran. “Rihanna chased Chris around all night, but he wasn’t showing her any love. It seemed to drive her crazy.” Friends who “know what a destructive influence” Brown was/is tell her she should leave him alone, but “she’s clearly beyond reason when it comes to Chris. It’s like she’s addicted.” Ugh, Chris Brown is such a clown. Who should Rihanna date next? Literally anybody else is better.

Miley Cyrus: Wilder Than Ever! Miley, who “raised eyebrows when she stepped out in stripper-style stockings during a coffee run,” still “can’t be tamed!” Sources claim Cyrus is “a complete party animal” (in the U.S.A.) spiraling “out of control — partying, drinking and using drugs.” Taking time off from her career, “behind closed doors, she is really messed up.” How messed up, exactly? “Miley is a complete stoner!” who “runs with a very shady, drug-using group.” The effects are that “she’s been missing business meetings and hasn’t been writing any new music.” Can’t a girl who’s been famous and working in public nonstop since before she was teething take a little break to get irie?

Teen Moms in Jail Fashion: I can’t deal with this, because it is the best. “From the perp walk to the catwalk, Jenelle has a lock on this one. Both Teen Mom stars ‘chose’ ankle chains and court-ordered nude, open-toe slides to go with their striped ensembles. But we simply prefer Jenelle’s blue-hued jumpsuit to Amber’s orange one. However, Amber may appeal our decision.”

Misc/Etc: “Sported pink-dyed ears” “reachable by helicopter” “The Windy City just got a gust of sugar off the Magnificent Mile” “top DJs and live aerialists” “moved in with three drunk party girls” “her close friendship with porn star Jenna Haze” “I love stripper shoes, and I always try to find the tallest ones” “David Spade fully expects the world to end this year, and he is prepared” “even as blood was flowing, she kept the tequila flowing too” “a freaking’ flawless complexion” “They want to read a book and at the end they want it to be all happily ever after” “romantic/bromantic”

Russell Brand and Katy Perry: “The ink is barely dry on Russell Brand and Katy Perry’s divorce papers” (which Katy Perry signed off on with a smiley face) “but Russell, a self-described former sex addict, has already been spotted prowling” for “sexy ladies” on the club circuit. “Anyone who thinks he’s just been dating one or two girls is mistaken. He loves the company of women. He can’t help himself.” Seems like he just enjoys being desired and doesn’t care if it’s really about fame rather than his actual self. “He has a constant supply of women who want to jump into bed with him. He can have a different woman every day.” While Russell helps himself to a delicious lady-parts buffet, “it makes some wonder if he was ever truly capable of love.” All signs point to nahhh. “Numbing the pain of his split with mindless sex will make him even less likely to pine over Katy.” A friend says, “He doesn’t care about her at all anymore.” Sure, until she gets a NEW BOYFRIEND.

Ice-T Loves Coco and Here Is Why! “I would run around naked when I was a little girl. I was a nudist! I always felt so free in my body.”The model/reality star/R. Crumb drawing says “Most women are scared to work out with weights, but I can leg press 400 pounds.” She says her butt is not an implant. Ice concurs that “her booty is a planet.” She is not ready for kids yet, but plans to “go into baby mode” in a few years. “But even then, I’ll still be a hot mom!” Coco is “confident, because I’m happy inside. And I have a husband who tells me I’m beautiful all the time.” She says “I don’t need photoshop!” Despite a recent high blood pressure diagnosis, Coco, who will “always be proud of my body,” is on a healthy track. “I’m going to be doing the splits in booty shorts when I’m 90!”

Ryan Reynolds and Blake Lively: “It’s been just over a year since he filed for divorce” from ScarJo, “but Blake Lively is already putting the heat on Ryan Reynolds to propose.” Good luck with all … that. “They haven’t even been together six months, and she is already talking marriage and babies.” A talking baby? Wow! Obviously Serena van der Woodsen can’t be stopped. “Ryan cares for Blake, but he rushed into marriage before, and he is still not really over that heartbreak.” A pal says that if Blake is “expecting a ring anytime soon, she’s in for a huge disappointment.”

Misc/Etc: “I love Italian food! I speak Italian!” “strange add” “got tips on how to make out in a hot tub” “Nice abs, old man!” “She’s been to rehab, likes smoking doobie, and is facing jail” “NAKED BABY ALERT!” “for someone who just gave birth, she looked great!” “Lindsay Lohan takes drastic steps to salvage her looks, and fails miserably” “how to cook and be a lady!” “popular but unhappy” “messy hair, sloppy makeup and unflattering outfits” “a no holds barred diet of mac and cheese, Pop Tarts, and Cap ‘n Crunch” “Lisa Lampanelli told me that she was afraid of me.” “Love does cost a thing!” “Lady Gaga looked like she was sucking the songwriting skills out of Sir Paul McCartney”

LeAnn Rimes and Kim K: Are Secret Bible Study Buddies: Both girls “know how to get the world buzzing about them.” Now they are going to church in Agoura together. “First the ladies were spotted having lunch with the church’s pastor, Brad.” PASTOR BRAD. “Then the new bests attended Sunday services together. WIth Kim starting her own Bible-study group, who knows what’s next?” Early in February, “Kim cryptically tweeted ‘Let’s all go swimming!’ LeAnn replied, “I’ll go swimming w/ you anytime. People have NO idea what we’re talking about, too funny xoxo.'” Hey I know what “swimming” is, I’ve seen Wild Things. “Some speculated, based on their new religious fervor, that they were talking baptism.” A sourse close to Kim says it was a joke about periods. OK!

1. “The thing at the moment is Adele. She is a little too fat, but she has a beautiful face and a divine voice.”
2. “If I was a woman in Russia I would be a lesbian, as the men are very ugly.”
3. “People in magazines are 50 percent bimbos and 50 percent pregnant women.”

Kanye West: “reportedly demanded Versace towels — that then had to be cut into smaller pieces. He also reportedly banned all man-made fiber in his presence.” What is he planning on doing with all those tiny Versace towels?????

Misc/Etc: “The beading is stunning and it highlights her baby bump” “the pigeon is just an optical illusion” “No one knows what goes on between two people in a marriage” “the honor of becoming a character in a Nicholas Sparks romance novel” “Triangles in the sky means that the stars are playing geometry with you” “Nice guy, man of principle, or chump?” “has now decided she can’t model lingerie because ‘my body should only be for my husband'” “nobody likes a sanctimonious SuperModelMommy” “Audrina Patridge is a self-confessed guacamole addict” “body-conscious party girl” “Best Actress? Best Brows!” “edgy is the new preppy” “We’re not young girls bouncing around trying to figure life out.” “I’m faded n I’m laughing so hard I’m crying.”